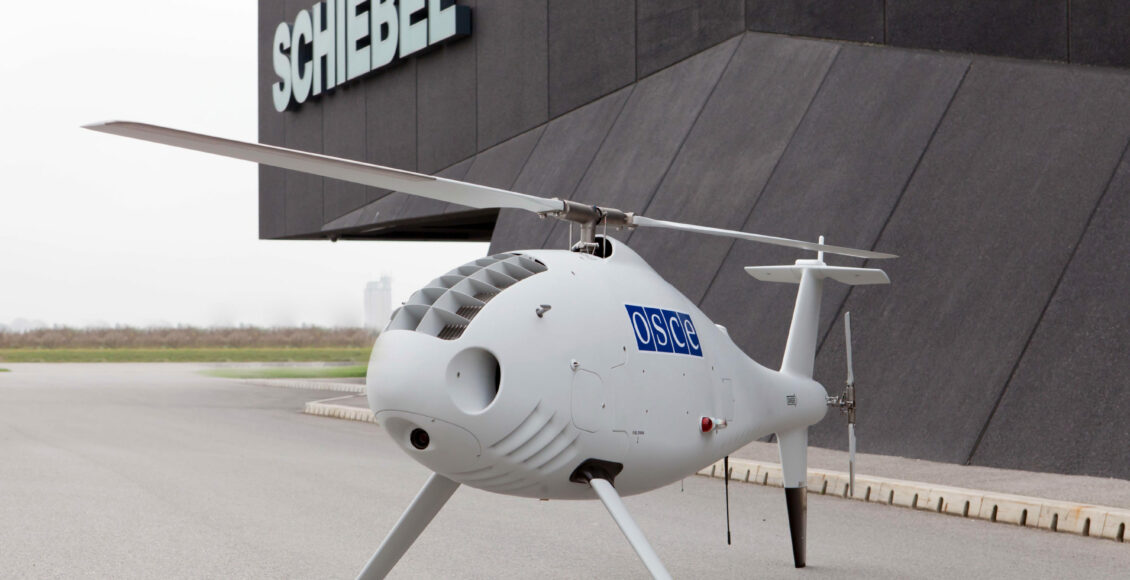 A Schiebel CAMCOPTER® S-100, prior to deployment by the OSCE Special Monitoring Mission to Ukraine. (Schiebel)
Share

The OSCE is reintroducing long-range unmanned drones to Ukraine’s Donetsk and Luhansk Regions.

Two years after drone operations were suspended in August 2016, the OSCE has elected to again introduce long-range unmanned drones (i.e., aerial vehicles – UAVs) to Ukraine’s Donetsk and Luhansk regions. The OSCE will be using long-range Camcopter S-100 UAVs, which will both operate at night and during the day in areas where ground patrols of the OSCE are not permitted.

Principal Deputy Chief Monitor Alexander Hug stated that “Given that the Minsk agreements envisage the use of unmanned aerial vehicles and other technology by the OSCE SMM, we expect the sides, as signatories to these agreements, to not interfere, by jamming, shooting or otherwise, with the operation of these UAVs.”

Part of the reason this monitoring system was initially canceled was that several of the OSCE’s drones were shot down using surface-to-air missiles and rifle fire, and were subjected to interference from jamming equipment.

Due to a lack of access to the crash sites, no blame was assigned to the downing of the drones. However, there was suspicion that the fire came from Russian-backed separatists.

Both Ukrainian fighters and Russian-backed separatists have attempted to shoot down drones in the past. After the cancellation of the long-range drones, short- and medium-range drones continued to function.

Lack of Enforcement of the Minsk Agreements

Perhaps one of the most concerning detriments in the Minsk Agreements was the lack of options on how to enforce it. Although the OSCE can act as a reasonably neutral actor in observing both sides of the conflict, there are many parts of the region where OSCE monitors are not allowed.

Naturally, these are the more common regions where violations are more likely to occur such as artillery attacks, weapons positioning, and prohibited weapons systems.

Why is the OSCE Reinstating the Program Now?

So, what has made it a necessity to restart this program? The main reasoning comes from a video sourced at Ukrainian NGO Come Back Alive, which shows a new electronic warfare system. Come Back Alive claims that this new system comes from Russia. However, Russia has disputed these statements.

The situation in Ukraine’s Donetsk and Luhansk’s regions has become somewhat of a hybrid conflict, where actual progress from either side does not occur often, but actual fighting and violations of the negotiated Minsk Accords continue to take place.

The real question is whether reintroducing the drone program will offer any new way of maintaining peace. While some state that monitoring systems decrease violence and increase incentives to follow the rules, what would stop separatists from shooting down these multi-million costing drones to merely be shot down again?

The reason why the OSCE is choosing to reinstate the drone program may have to do with the new electronic warfare system, with some stating it is an escalation of electronic warfare. The maintenance of such a program is, however, questionable.