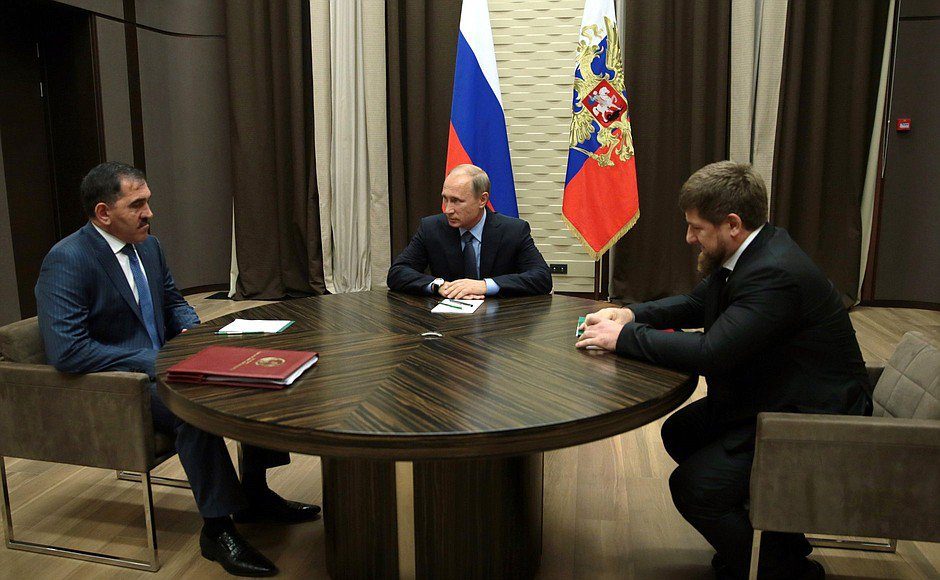 On September 26, 2018, Chechen president Ramzan Kadyrov and his Ingush counterpart Yunus-bek Yevkurov signed a bill initiating a land swap between Chechnya and Ingushetia. In the following months, this seemingly straightforward agreement has grown into a major issue that threatens to upend the stability of the Northern Caucasus region. Mass protests began October 4 in the Ingush capital of Magas and continued until October 17.

Around 10,000 people attended these protests, an unprecedented number for Ingushetia, where the population is just over 450,000. The protests stemmed from a lack of public deliberation regarding the bill and a history of adverse sentiments concerning land swaps. Furthermore, the text of the agreement was not published, and some members of the Ingush Parliament have issued statements saying that their signatures were falsified.

Protestors also argued that the ratification of the bill should be nullified because the Russian Constitution requires a public referendum on all territory changes. According to official media, the bill swapped allegedly uninhabitable lands in Chechnya’s Nadterechny District and Ingushetia’s Malgobeksky District. However, the equality of the swap was very much in question, as Chechnya is taking control of 25 times more land than Ingushetia.

As protests grew, demonstrators began demanding Yevkurov’s resignation. While he did not resign, his government put forth several alternatives to the nullification of the land swap agreement. Eight days of demonstrations were allowed by the government of Ingushetia, which also outlawed the use of force against protestors. This drastically reduced fears of a police crackdown that had been predicted by many international human rights groups including Amnesty International.

Ingushetia and Chechnya Have a History of Border Disputes

For the Ingush, the mere idea of a land swap brings up painful memories. North Ossetia gained control over the Prigorodny district in 1991, which resulted in an ethnic cleansing that claimed the lives of 600 Ingush. The border dispute between Chechnya and Ingushetia is similarly nothing new, it has remained unresolved since the breakup of the Soviet Union. The Chechen-Ingush Autonomous Soviet Socialist Republic was divided into Chechnya and Ingushetia in 1991.

While the Republic of Ingushetia joined the Russian Federation, Chechnya chose to declare its independence from Russia twice but failed on both counts. Despite this, then Ingush-President Ruslan Aushev and the then-President of the Chechen Republic of Ichkeria, Dzokhar Dudayev, signed a border demarcation agreement in 1993. Even though the deal wasn’t ratified, it set a precedent whereby the majority of the Sunzhensky District remained within Ingushetia.

In March 2003, then-President of Chechnya, Akhmad Kadyrov, and then-Ingush leader Murad Zyazyko signed a similar agreement. It followed the precedent of the Aushev-Dudayev agreement, giving full jurisdiction over the Sunzhensky District to Ingushetia while entitling Chechnya to the settlements of Assinovskaya and Sernovodsk. While disagreement remains between Chechnya and Ingushetia, these two agreements served to appease the local populations.

However, since Ramzan Kadyrov took power in Chechnya in 2006, the norms in the Northern Caucasus have shifted. The Kremlin implicitly handed the reins over to Kadyrov within Chechnya, and in doing so, allowed his authoritarian style of governance to continue as long as Chechnya remained peaceful. This is seemingly at-odds with Kadyrov’s interest in pursuing regional power and interference within Ingushetia. In 2012, three Chechen militants were killed in the Ingush village of Galashki. A year later, six Ingush police officers were killed when 300 Chechen security Spetznaz (special forces) entered the town of Arshty.

That same year, Kadyrov introduced an amendment to the Chechen Constitution which asserted Chechen claims to six further settlements in the disputed Sunzhensky District (Voznesenskoye, Karabulak, Nesterovskoye, Sleptsovskoye, Troitskoye, and Chemulga). This particular incident caused serious friction between the two republics and ultimately had to be resolved with the Kremlin’s mediation.

What Prompted the Chechen-Ingush Land Swap?

In August, construction began on a road that would lead into the Sunzhensky district, leading many to fear expansionism by Chechnya. Other reports have cited the construction of a Chechen border post in the village of Arshty, which is two kilometers past the border with Ingushetia. These actions may have convinced Yevkurov that it was better to avoid escalation and settle with a land swap.

Some local commentators have expressed concerns that Kadyrov is using the land swap as a tactic to assume control over Ingushetia with the Kremlin’s consent. Given his experience with pacifying Chechnya, Kadyrov could easily offer to similarly pacify Ingushetia, taking a burden off the Kremlin’s shoulders. According to Russian political scientist Dmitry Oreshkin, “Kadyrov can afford what Yevkurov, for example, cannot. Kadyrov is active, he is increasing political weight and has ambitious plans. Kadyrov is pushing his interests and, apparently, not without the support of Moscow.”

Perhaps the main reason why the Kremlin has been so supportive of Kadyrov is the fear of a resurgence of radicalism in the North Caucasus. Chechnya was a source of substantial regional instability throughout the 1990s and early 2000s. Kadyrov’s actions have since brought Chechnya under control, a fact that has not gone unnoticed by the Kremlin. Accordingly, they may feel the need to reward Kadyrov, to ensure his loyalty during a possible future uprising in Dagestan, where the Kremlin has been purging local elites. As such, Kremlin spokesman Dmitry Peskov has recently said “the Kremlin is closely following the situation,” but stated that it is a regional issue rather than a federal one.

In all likelihood, the protests in Ingushetia won’t amount to much, at least in the near-term. However, the land swap raises the probability of future instability within the North Caucasus region as a whole. With Chechen minorities in both Dagestan and Ingushetia, there is a significant chance that Kadyrov could choose to use the same rationale that Russia adopted in Crimea to seize land and gain more power for himself.

Russia Can’t Afford Another Crisis in the Caucasus

Given Russian President Vladimir Putin’s low approval ratings, any instability or deterioration of security in the Caucasus is bad for Moscow. It is difficult to forecast how tensions in the North Caucasus will be managed. The Kremlin has yet another volatile matter on its list of problems, which includes Crimea and Ukraine, poor turnout in recent gubernatorial elections, ongoing sanctions, and poor public approval.

Protestors have planned to travel around Ingushetia and inform citizens of this agreement and submit please to local courts, the Council of Europe, the UN, and the Islamic League to have the border agreement nullified. Despite these protests, the border agreement came into force on October 16, 2018, with Kadyrov decrying attempts against the deal as “inadmissible and futile.”

However, Ingushetia’s Constitutional Court declared on October 30 that the land swap was illegal. The Court decreed that any changes to the territory of Ingushetia require a referendum, which wasn’t held in the case of the Chechen-Ingush land swap. However, rather than stating that the agreement was invalid, the judge referred the matter to the Russian Constitutional Court.

On December 6, Russia’s Constitutional Court upheld the land transfer as legitimate, further stating that Ingushetia’s Constitutional Court lacked the jurisdiction to make any judgments on the matter. As of yet, there has been little reporting of further discontent in the Caucasus, but the long-term implications of the Chechen-Ingush land swap remain to be seen.