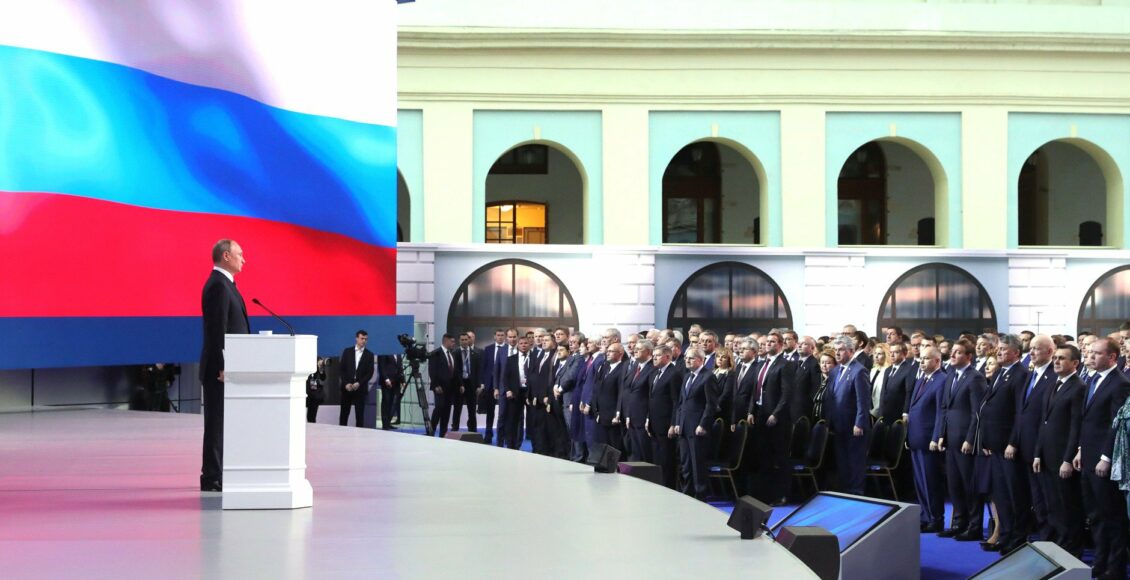 Each year, the President of Russia delivers a “State of the Nation” speech to the country’s parliament in which he discusses the current state of the country, what the future holds, as well as his plans for how best to achieve that future.

While not as traditional as the president’s New Years Address, the State of the Nation speeches an important signal of what is to come domestically as well as what the international community can expect from Russia in the upcoming year.

While it might seem counterintuitive for Putin to concentrate on internal affairs when Russia is essentially seen in the West as an international pariah, he proceeded to do so nevertheless. The reasoning behind this is likely due to his public approval ratings, which have been in a steady free-fall since October of 2018.

Putin’s approval ratings, rather than being a reflection of public sentiment towards Putin’s performance as president, are instead an indicator of widespread dissatisfaction over recently-enacted pension reforms. To deflect blame, Putin reached into the standard “strongman” leader’s toolkit, stating that “[Russian] development projects are not federal, and even less so agency-based. They are national.” To paraphrase, any failures shouldn’t be attributed to the Kremlin.

Conversely, the Kremlin is to be credited for any policies that are viewed more favorable, such as subsidies for children, new hospitals, and tax-breaks for construction companies. Putin’s rejection of responsibility for policy failures while simultaneously taking credit for any-and-all successes exemplifies his use of rhetoric to deflect blame and negative feedback.

Even as poverty in Russia is, overall, decreasing, the poverty rate is estimated to remain above 13 percent for the next three years. In his “State of the Nation” speech, Putin announced that social programs would be implemented to help those living in poverty work their way out.

As for poverty caused by corruption, Putin stated that “[the Kremlin] will draw the appropriate conclusions about the work quality and performance at all levels of executive power.” In short, he is saying that those who step out of line will be fired.

Putin also focused on the issue of medical care in Russia, explicitly drawing the attention of listeners to how poor the country’s healthcare was in the 1990s in contrast with how much the system has improved since then. Importantly, he did not mention continued difficulties within the current Russian system, choosing instead to draw attention to problems with municipal waste, which, coincidentally, is connected to the son of the Russian Prosecutor General, Igor Chaika.

Unsurprisingly, Putin emphasized the importance of cultural history and educational improvements. Given Russia’s continuous focus on valorizing its history as well as keeping a careful eye on possible “traitors” from an early age, this statement wasn’t particularly unexpected.

One item of note, however, was Putin’s proposal to exempt from taxation not only medical and educational institutions, but also regional museums, theaters, and libraries. In typical form, Putin provided few details about how precisely this proposal would work.

There was hardly any mention of “active measures.”

In terms of foreign affairs, Putin opted out of discussing accusations of ongoing Russian election interference and Kremlin-sponsored disinformation campaigns. Instead, Putin merely said that he hopes the relationship between Europe and Russia can return to one of cooperation—a statement that frames European leaders within Russia as impeding progress.

Moreover, Putin explicitly refuted all American accusations regarding the INF Treaty and simplified the matter into a single sentence: “Russia does not intend to deploy such missiles in Europe first,” although U.S. and NATO officials have accused Russia of doing just that.

Russia is here to stay

The last two paragraphs of Putin’s speech are unquestioningly aimed at the Russians. “Solidarity in striving for change,” and “a unified society”are both phrases that imply that all Russians need to stand together going forward. Even while Putin suggested that peace is essential for Russian development, whether or not peace will continue to allow him to remain in power is another question altogether.

To foreign leaders, Putin is unsubtly reestablishing his control over Russian society, as well as not-so-coincidentally highlighting Russia’s missile capabilities just before the speech ending. In sum, Putin’s 2019 “State of the Nation” address is a warning to both Russians and the international community: Russia will continue to see itself a global player with influence and won’t tolerate any attempt to curtail its ambitions.