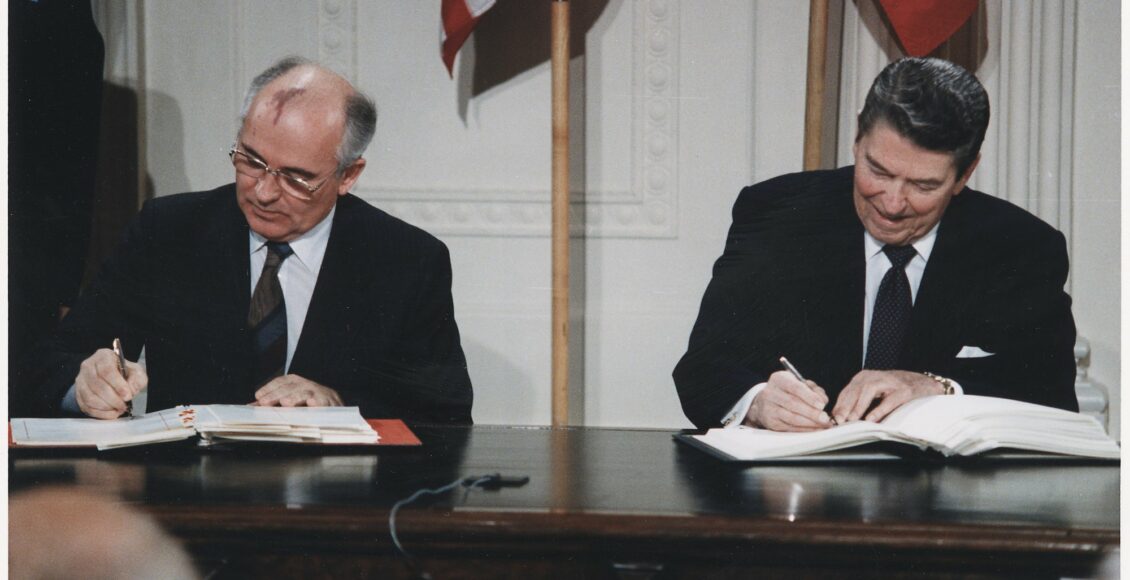 The U.S. is moving to withdraw from the Intermediate-range Nuclear Forces (INF) Treaty in response to alleged violations by Russia.

Out of the few issues that Russia and the United States agreed on during the Cold War, arms control was one of the more prominent subjects. Both countries recognized that some form of control was needed as tensions escalated in the early 1980s. This understanding culminated in the Intermediate-Range Nuclear Forces Treaty of 1987, known as the INF Treaty, signed by then-U.S. President Ronald Reagan and Soviet leader Mikhail Gorbachev. Forty years later, the United States has indicated it will withdraw from the treaty.

On October 20, 2018 U.S. National Security Advisor John Bolton announced that according to U.S. rationale, there are “Russian INF-violating missiles in Europe now… the threat is not American withdrawal from the treaty. The threat is Russian missiles already deployed.” Bolton also argued that the U.S. doesn’t find the treaty fair because other countries like Iran, China and North Korea can develop weapons that are prohibited under the treaty while the U.S. cannot.

According to Bolton, Russian violations of the INF treaty imply that the U.S. is the sole party in compliance. Kremlin spokesman Dmitry Peskov criticized the move, claiming that to proceed without any sort of new agreement was not welcomed by the Russian Federation.

What is the INF Treaty?

The INF Treaty prevents the United States and Russia from possessing, developing, or deploying ground-launched ballistic and cruise missiles with a range of between 500 and 5,500 kilometers. Almost 2,700 short and medium range missiles were eliminated by the Soviet Union and the United States.

The initial treaty was formed in response to a Cold War crisis, when Russia installed around 400 nuclear warheads pointed at Europe. In turn, the U.S. deployed Pershing and Cruise missiles within Europe itself. Anti-nuclear campaigners protested that the deployment would turn Europe into a nuclear battleground.

Negotiations were initiated in 1981 but only continued for two years before falling apart. However, in 1986, negotiations restarted thanks to the Prime Minister at the time, Margaret Thatcher. This time, talks not only surrounded the proposed INF treaty, but also the START I Treaty. Due to the bilateral nature of the treaty, neither China nor any other country besides Russia is party to the INF treaty.

Accusations of non-compliance are nothing new.

In 2014, the Obama administration accused Russia of violating the treaty by testing a ground-based cruise missile that fell within the intermediate range distance. This time, the accusation stems from that same missile, the 9M729, which the Trump administration claims has been successfully tested. However, in 2014 there was no threat of the then U.S. government leaving the treaty. Many of the United States’ European allies objected to the idea, particularly Germany, as they saw it as a precursor to a new arms race.

Even now, Nikolai Patrushev, Secretary of Russia’s Security Council, has publicly stated that Russia is willing to discuss mutual grievances with the U.S. Ensuring that intermediate missiles are not a threat is a positive aspect of the treaty for both countries. It also means that European countries are not concerned about becoming the newest battleground between the US and Russia.

Is terminating the INF treaty a mistake?

Although it can be argued that the bilateral nature of the INF treaty is outdated in a world where the U.S. considers its main rival to be China, that is no reason to unilaterally withdraw from the treaty. In fact, by exiting first, the U.S. will receive all the blame for terminating the treaty.

Once the U.S. withdraws from the treaty, there will be no reason for Russia to, at the very least, feign compliance. In other words, Russia and the US will feel free to deploy these short and intermediate range missiles. That does not sit well with European allies, who have all cautioned that leaving the treaty is a mistake.

In the 1960s, the U.S. had more than 30,000 nuclear warheads. As of last year, that number dropped to around 4,480. Without arms control treaties, there is every chance that another arms race could commence. Particularly the New START treaty, which is set to expire in 2021, may no longer seem necessary in a world where, according to President Trump, “until they get smart, there’s going to be nobody that’s even going to be close to us.”