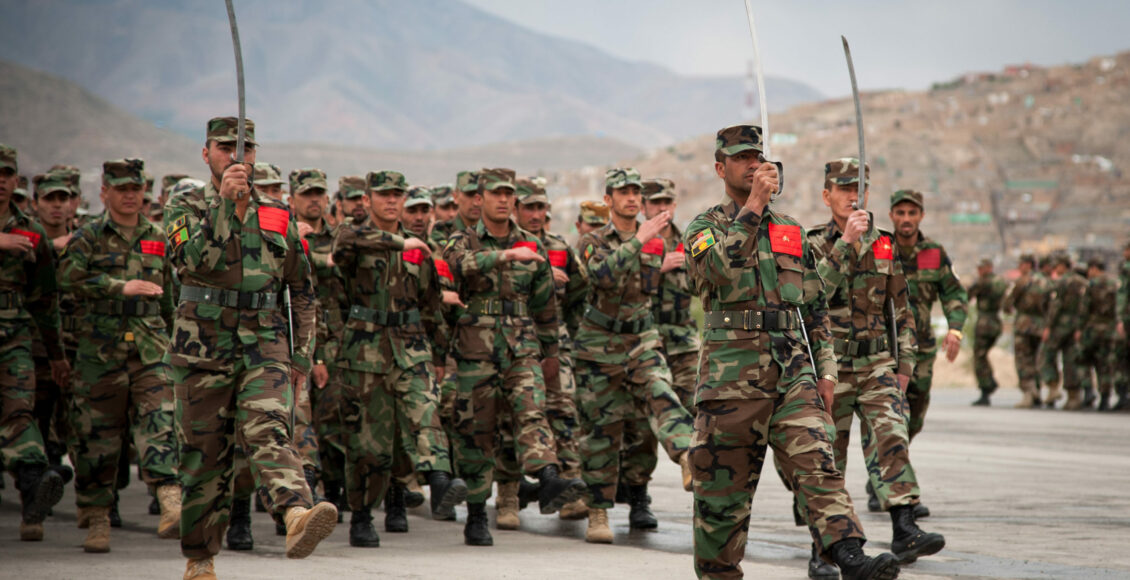 Back in 2004, when Afghan and American generals were laying the foundations for the post-Taliban Afghan army and security forces the number one question in the minds of everybody around the table was “who will pay for it?”

In those days, it was assumed the burden would fall on the United States and its allies, but that calculation is changing fast with President Trump in office and war fatigue across the capitals in Europe. Today, the answer is simple: Afghans will pay for it through revenues from its vast natural resources and geographical position combined with a national conscription system.

In the early days of U.S. invasion of Afghanistan, there were three schools of thought over the future of the Afghan armed forces. In the first, there were those who believed that Afghanistan does not need a full-fledged army and police but a small defense force to quell local revolts and maintain border security. This was based on the rationale that international security forces would remain for the long run in the country and also due to objections from former Pakistani dictator, General Pervez Musharraf,  who opposed the establishment of a large army for Afghanistan for geopolitical reasons. The second school of thought advocated for an Afghan army and security forces in the scale and size of the pre-civil war era (i.e. 250,000 strong with an airforce). Third, was a group of Afghan monarchists and former mujahidin who believed in the mobilization and transformation of the existing mujahidin and militias into an army and police. Of course, none of those options prevailed. Instead, Afghans together with their NATO allies raised, trained and deployed a completely new army based on their threat perception and needs assessment for the country.

In 2014, during the transition of the security responsibilities from International Security Assistance Force (ISAF) to Afghan forces led by Gen. Patreaus and the then chairman of the transition commission and now President of Afghanistan, Ashraf Ghani, there was a golden opportunity to reconfigure and redesign a financially sustainable Afghan security forces but this chance was lost. Although steps were taken, other priorities took over, and the task remained unfinished. While the Bilateral Security Agreement (BSA) under the Strategic Partnership Agreement (SPA) with the United States, alongside the NATO Status of Force Agreement (SOFA) ensures long-term funding, training, and mentoring to Afghan forces, the election of President Trump and increasing war fatigue in the United States has put the long-term future of bilateral security cooperation on uncertain and shaky ground.

Almost for a hundred years, Afghanistan owned a military despite many periods of instability and political anarchy, which it funded through a mixture of traditional and non-traditional sources. The traditional sources of funding included a quota based national conscription mechanism through tribal elders and maliks to fill in the ranks of the army and police; imposition of local taxation and food rations to feed the army and security forces, and finally reliance on local transport for logistics and sustenance. The non-traditional aid came largely from the British Raj and the Russians (later the Soviets).

The Raj, the Russians, Germany,  Turkey, and others provided military equipment and training. Amir Sher Ali Khan established the first Afghan army with some auxiliary tribal militias with the financial and technical support of the British Raj and Russian czar. This army was trained, equipped and funded over the years with a mixture of British tributaries, equipment from British Raj and local taxation and quota conscription system on local tribal elders across the country.  conscription became a controversial matter much later on during the communist regime when many Afghan youths were pushed into the frontlines to fight against the mujahidin, many of whom never returned home, which led to massive migration of Afghan youth to neighboring countries for safety and work. But the culture, practice, and acceptability of conscription as a system existed during the reign of various Afghan rulers. Afghan kings, historically, used a national quota conscription system to fill the ranks of the army and security forces.

Today, Afghanistan has a paid volunteer army and security forces, which is almost entirely funded by the United States and NATO allies. Any experienced military expert will tell you that raising, maintaining, and sustaining a voluntary force is extremely expensive and complicated for poor and aid-dependent economies. Turkey, Israel, Iran, Tajikistan, Uzbekistan and a dozen other states, in the Afghan neighborhood and beyond, who are in a much better economic and financial state run a national conscription system to sustain its armed forces.

Afghanistan can use the revenue from its vast mineral wealth, sale of its abundant water resources to neighbors, transit fees as a land and air bridge to South and Central Asia and export of high-value agriculture crops to fund its security forces. The Afghan leadership and its international partners can rethink, reconfigure, and redesign affordable and financially sustainable Afghan forces through reinstating a carefully designed national conscription system, build up of local defense industries to drive cost down and saving on essential defense budget items to pave the way for medium to long-term financial sustainability of the Afghan security forces.

The time has come for the Afghan military leaders and its international partners to make some hard choices and decisions for the long-term financial sustainability and viability of the Afghan security forces. They will have to rethink, reconfigure, and build a fiscally sustainable, operationally efficient and capable military increasingly funded from the domestic revenues of Afghanistan.  This can be done through a combined four-track financial sustainability strategy: a. Force management and national conscription; b. Fiscal austerity and budgetary savings; c. Building local defense industries; and d. Establishing localized defense and militias.

The first significant decision to make is whether the Afghan military and political leadership would like to have a NATO or non-NATO regular army and security forces. Some military experts argue that a NATO standard Afghan army and security forces can only be viable if Afghanistan remains a long-term ally of NATO and the west with a functioning self-sustaining economy while others advocate for a hybrid standard (i.e. a mixture of NATO and non-NATO standard force based on the agility, mobility and needs assessment of the various units with the Afghan armed forces.

The second major decision is to implement a national, local quota-based conscription mechanism combined with better force management, salary, and remuneration rationalization and anti-corruption drive which could significantly drive down the personnel costs within the Afghan armed forces.

The idea of enacting drafting or conscription is a politically charged subject in Afghanistan, especially if you have a politically fragile government in Kabul, which lacks broad-based political support. This is primarily due to bad memories of the population from the communist era conscription drive, which led to the deaths of thousands and migration of much more Afghan youth from the country. The Afghan mujahidin and even Taliban to this day impose local conscription in their areas of control.

If the local elder does not generate the required quota of able-bodied men to fight, he will have to offer money, cattle, or agricultural products as a replacement. This exact practice has been in place since the rule of the Afghan Iron Amir, Amir Abdulrahman Khan, in the late eighteenth century who for the first time used this method as a systematic way to fill in the ranks of the Afghan military. The current Afghan government will have to enact a carefully designed quota-based local, national draft or conscriptions system. This will assist in significantly driving down the costs of the Afghan armed forces; foster patriotism and shift much needed budgetary resources to other priorities within the security sector.

Furthermore, the Afghan government can save significant amount of money from the existing budgetary expenditures through taking a couple of bold austerity measures: a. domestic purchase as compared to import of food items for Afghan forces. b. saving on fuel,  oil and energy costs. c. better maintenance and inventory management of weapons, ammunitions and armored vehicles among others. Such austerity measures could assist in saving millions of dollars within the budget of Afghan security forces. Additionally, the time has come for Afghanistan to produce and manufacture its own basic defense items such as bullets, weaponry and other basic defense items.

While the initial capital investment cost of such an undertaking will be high but over time this will significantly drive down defense expenditure and increase self-reliance. Moreover, Afghanistan could redesign its defense forces to a more mobile and highly equipped small professional army meant to fight terrorism and local insurgency designed for irregular warfare augmented with an auxiliary local militia. This means we could significantly reduce the number of the existing Afghan army and police while augment the gap with local tribal forces to fight local insurgencies and terrorism. This will also assist in the long-term financial sustainability and operational effectiveness of the Afghan security forces.

Such a fundamental reorganization of the Afghan security forces followed by austerity measures will leave Afghanistan with three options for the shape and size of any future army and security forces: a. A modern professional army which will be costly and unsustainable unless Afghanistan finds alternative sources of revenue to fund it. b. A small professional army at the core augmented with auxiliary local militias across the country to fight insurgencies and do counter-terrorism. c. A hybrid force—a combination of a professional army, localized defense forces and militias at different levels.

Regardless of the choice of standard, size, and format of the Afghan security forces; the Afghan government and its international partners – principally the United States and NATO member states will need to fund this force for years to come until Afghanistan builds an indigenous self-sustaining economy from two sources: The first being traditional sources such as a national tax scheme, a saving and austerity regime, and national conscription. The second is non-traditional sources—a long-term trust fund but with significantly less contribution in terms of dollar amount as compared to the current rates to help sustain the force along with scholarships and training programs for its officers corp.

In the words of former Afghan Defense Minister, General Tariq Shah Bahrami, Afghans will eat grass but will fund Afghan forces and defend their country even if NATO and U.S. forces leave the country. While this may be true, Afghans will have to fundamentally rethink and redesign Afghanistan’s military into financially viable, economically sustainable, and professionally agile armed forces.