Are Afghanistan’s Mineral Deposits the Answer to the Country’s Economic Woes? 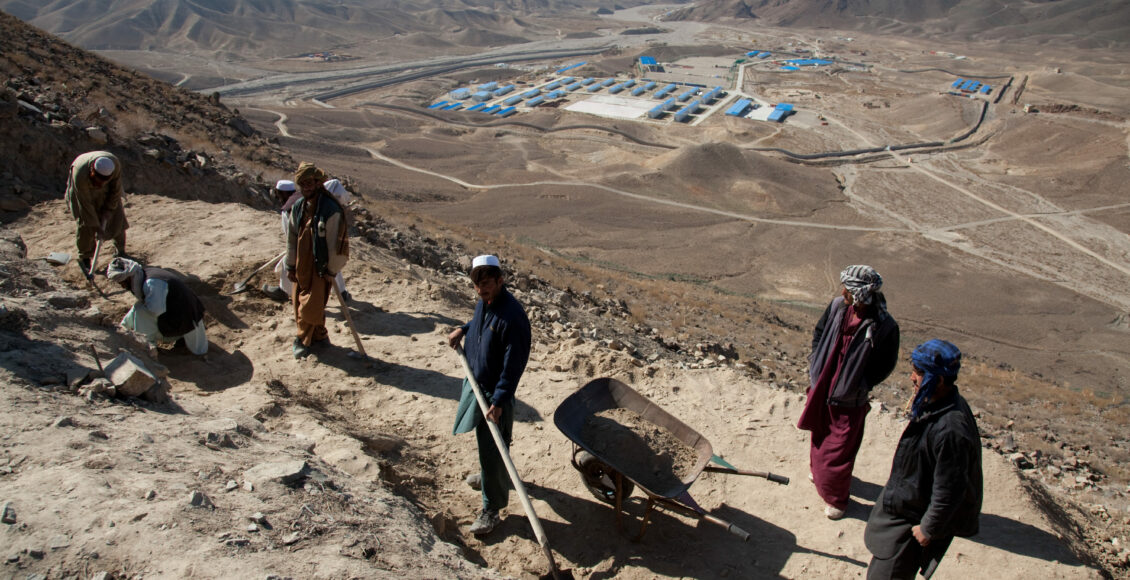 Afghanistan’s mineral deposits are a potential glimmer of hope for the country’s suffering economy.

As it stands, a mineral-based economy is one of the few options available when it comes to establishing a solid foundation on which to develop Afghanistan’s economy. The development of the country’s mineral sector has been hampered by insecurity, political instability, poor policy direction, the absence of a basic legal framework, and a lack of necessary infrastructure and transit agreements with neighboring countries. However, Afghanistan’s mineral deposits present an alternative to the country’s increasing over-reliance on an economy dependent on foreign aid.

Afghanistan’s mineral deposits consist of metals and non-metals. Many strategically essential minerals can be found in the country, including beryllium (used in airplanes, helicopters, ships, missiles, and spacecraft), uranium, lithium, and niobium (a rare soft-metal use in semiconductor production). According to the United States Geological Survey (USGS), Afghanistan’s mineral wealth is estimated at around (US) $1 trillion. This figure is based on previously conducted Swedish, British, and Soviet geological surveys, in addition to more recent studies performed by the USGS. In total, however, only about 30% of Afghanistan’s territory was covered by previous geological surveys. Even though the earlier Swedish, British, and Soviet studies have been updated with more recent aerial geophysical and geochemical studies, a complete geological survey is required to understand the full potential of Afghanistan’s mineral deposits.

Existing data only accounts for 30% of the country, and isn’t comprehensive enough to confidently estimate the value and depth of Afghanistan’s mineral wealth. Furthermore, a complete geological study of Afghanistan would enable for a more accurate determination of the economic feasibility of developing the country’s mineral extraction and distribution capabilities. In other words, all that is known from existing geological surveys is that there are signs of what could be a substantial presence of minerals elsewhere in the country, but the details of specific deposits remain unknown. Already, doubts have been raised that Afghan mineral deposits could be economically unviable to develop resource extraction capabilities around. While these doubts may sway potential investors, the country’s known mineral deposits remain attractive from an investor’s standpoint.

There is a near-unanimous consensus in Afghanistan that the country must develop its mineral sector. When it comes to the pace of such development, however, there are three primary schools of thought within Afghan policy-making circles and the country’s political establishment. In the first camp are those who believe that the mineral sector development should be pursued without delay. They argue that Afghanistan must supplement declining foreign aid with revenues drawn from mineral extraction. Those in the second group posit that mineral sector development should be prioritized based on the revenue-generating potential of individual deposits. The third group opposes any progress until the political and security situation in the country stabilizes so that Afghans can explore any development in a more secure environment. Given the economic circumstances, combined with the urgent need to build a domestic economy that isn’t dependent on foreign aid, Afghanistan has no choice but to move aggressively to develop its nascent mining industry.

Fast-paced development requires up-to-date and complete geological information concerning mineral deposits. However, such data is unavailable. Providing access to a comprehensive geological survey is a significant challenge, and undertaking such a study is a costly exercise. A complete study will be impossible without the outside investment, legal reform, and decisive political action that is needed to build a strong and apolitical Afghanistan Geological Survey, an agency which currently is deeply politicized and has a limited functional role, having been monopolized by a generation of Soviet-trained geologists.

Traditionally, it is the responsibility of the state to provide potential investors with the necessary geological survey data. Geological studies are essential when it comes to soliciting both private and public sector investment, at home and abroad. Complete geological surveys are expensive, costing millions of dollars the Afghan government cannot afford. This is where Afghanistan’s foreign aid donor community can play a crucial role.

To date, the Afghan government has received eight tenders and awarded two significant contracts with support from the U.S. Department of Defense, the U.S. Agency for International Development (USAID), the U.K. Department for International Development (DfID), and the World Bank. These include tenders for developing the Aynak copper mine, the Hajigak iron ore deposit, the Badakhshan gold mine, the Shaida copper mine, and the Ghazni gold and copper deposits. Almost all have their flaws, but the initiation of bidding processes and the awarding of contracts nevertheless sends a strong signal to the global investor community that the Afghan mining industry is open for business.

Recently, however, the National Unity Government (NUG) has announced its decision to review all received bids and awarded contracts. This announcement sends the wrong signal to investors, on the top of Afghanistan’s myriad of security, political, and infrastructure problems. It is well within the Afghan government’s right to review or even revise existing contracts and bids, however, halting the process altogether will be disastrous for the development of Afghanistan’s mining industry. All face shortcomings or obstacles concerning feasibility clauses, energy and water shortages, human capital challenges, and an absence of transit agreements, to name a few. The best way to address these shortcomings, however, is through bilateral negotiations and contract revision mechanisms, rather than canceling bids outright and effectively shutting down the bidding process.

On the other hand, artisanal and small-scale mining (for construction materials and precious stones, for example) remain a source of financial revenue for the Afghan government but, at the same time, are a significant driver of instability in regions of the country where government presence is little-to-nonexistent. The black market economy from these mines fuels the conflict within the country, particularly in the northern and eastern provinces. Today, part of the unrest in regions in the country’s north and east—such as the Logar province—is due to local rivalries over mineral revenues from small mineral deposits. In the short-term, the best way to tackle these issues is through the gradual incorporation of smaller-scale mining operations into the country’s overall strategy, as the rule of law and the reach of the country’s security forces extend to all parts of the country.

The Afghan government institutions responsible for the development of the country’s mineral sector (i.e. the MOMP and AGS) have little-to-no experience with managing the tendering process and the awarding of large mining contracts. The eight existing tenders, along with many of the awarded contracts represent are Afghanistan’s first experiences awarding substantial mineral rights contracts. They were solicited or awarded with technical expertise and assistance provided by foreign partners including the U.S. Department of Defense Task Force for Business Stability Operation (TFBSO), the World Bank, and DfID, amongst others. Many contracts have been awarded in a mostly noncompetitive environment where global mining corporations such as MCC or CNPCI, with years of experience negotiating large-scale mineral rights contracts, are entering into negotiations with Afghan officials lacking the necessary negotiating skills or expertise.

On the other hand, certain circles within the Afghan public and private sectors oppose awarding mining contracts to foreign firms and are advocating for the establishment of large state-owned oil and gas, iron, and copper corporations—possibly employing a public-private partnership model. However, this view loses sight of the fact that the Afghan labor force lacks the necessary technical expertise, and Afghanistan itself lacks the necessary financial capital to pursue a state-owned industrial model. The necessary technical knowledge, skilled human capital, and financial resources can only come from foreign firms for the foreseeable future. Afghanistan’s existing state-owned enterprises—such as the Afghan Gas Enterprise (AGE) and the Afghan Fertilizer Factory in the country’s north—are struggling financially and operationally, suffering from antiquated machinery and incompetent management resulting from years of conflict and instability.

The Afghan Ministry of Mines and Petroleum (MOMP) has been primarily occupied in recent years with the management and awarding of small-scale constructing material and precious stone extraction contracts through the MOMP Cadastre department. However, the role of such an vital institution shouldn’t be confined to the awarding of minor contracts. Instead, the MOMP should be empowered to oversee the proper implementation, oversight and control, audit, and financial revenue management, and technical oversight of all large and small mineral extraction rights contracts. The ministry is in desperate need of a severe overhaul if there is to be any substantive, long-term development in the Afghan mineral sector.

The Afghan tax and royalty regimes are further obstacles to the development of the country’s mining industry. The country’s tax structure is burdensome for investors and is internationally non-competitive—the country’s taxes are much higher than those in South American or African states. Royalty payments for the Aynak Copper Mine are set at nearly twelve percent, and rates for the Hajigak Iron Ore mine are around eight percent, far higher than international norms—which are between four and six percent. Simply put, the financial and economic regime presently governing the Afghan mineral economy is not attractive to potential investors. These factors must be changed if any long-term, sustainable development of Afghanistan’s mineral sector are to be seriously considered.

Another major obstacle to the development of the Afghan mineral sector is a lack a lack of necessary infrastructure to facilitate the export of minerals. Afghanistan is poorly connected to regional ports, both due to the country’s geography and the current security situation. An integrated infrastructure development strategy for the establishment of resource corridors to ports in the region as well as the construction of energy pipelines to power the plants for processing minerals before export. Such an integrated infrastructure development program would require billions of dollars in capital and technical expertise that is presently lacking in the country. The Afghan government should aggressively engage in resource diplomacy with its neighbors to gain access to ports to export commodities to international markets.

Despite these challenges, the Afghan mineral sector remains an attractive opportunity for both domestic and foreign investors. None of the difficulties mentioned above are formidable enough that they cannot be addressed by measures gradually enacted by the Afghan government. In the immediate-term, Afghanistan must present a strategic framework for the development of its nascent mineral sector—one that attracts both domestic and international investment. This framework must include reform of the country’s legal system, in addition to providing policy direction to attract foreign investors.

While Afghanistan’s mineral deposits present a tremendous economic opportunity for the country, the government must prioritize the mineral deposits it intends to put to domestic and international tender. Just a few successful bids and their successful implementation would serve as a pilot project, paving the way for further investment—a necessary step for the development of Afghanistan’s mineral sector.