The Pulwama Incident Part Two: Pakistan and India Have Much to Learn 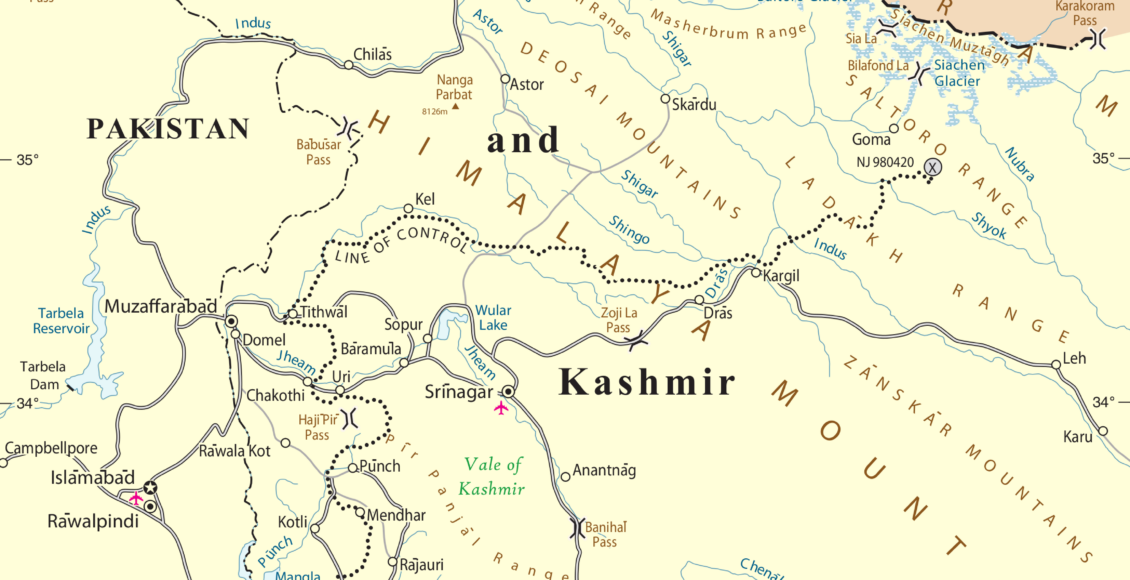 United Nations map of the Line of Control (LoC)
Share

The world stood on the precipice of a nuclear war in the final week of February 2019.

This article is a continuation of a previous analysis of the Pulwama attack that examined how the attack and the way in which India responded threatened South Asian security.

Following a terrorist attack on an Indian security forces convoy in Pulwama, Kashmir, India and Pakistan engaged in airstrikes, dogfights and cross-border shelling along the Line of Control (LoC). Since their independence and partition in 1947, India and Pakistan have fought several wars and low-intensity conflicts.

There was, however, an aspect of this latest incident that changed the game and had potentially catastrophic consequences: both states are nuclear powers. Excluding the 1999 Kargil War, this is the only time in history that nuclear powers have attacked each other. Possibly more significant is that India displayed a willingness to strike targets in mainland Pakistani territory—outside of Kashmir.

It started when the Indian Air Force (IAF) struck what it claimed to be a Jaish-e-Muhammad (JeM) terrorist camp in the town of Balakot in Pakistan—the first time an Indian aircraft violated Pakistani airspace since the War of 1971. Pakistan, in response, shot down an Indian jet and captured its pilot, Wing Commander Abhinandan Varthaman.

To de-escalate, Pakistan released the pilot within forty-eight hours of detaining him. India’s response was to unleash a barrage of shelling across the LoC. All the while, an aggressively jingoistic Indian media apparatus was disseminating information that was inconsistent, confusing or outrightly false. In some reports, details would be altered within just a few hours.

At the time of writing, both countries seem to have stood down and ceased hostilities. Many would call this a stroke of luck, considering the cataclysmic ramifications of further escalation. Lessons must be learned by both sides to prevent a situation like this happening again. Such a crisis could spin wildly out of control, threatening the security of Southeast Asia—and the world.

Arguably, India has the most to learn. Prime Minister Narendra Modi took a significant gamble ordering the initial strikes in Balakot. Driven by revenge for the Pulwama Attack, Modi assumed that appearing tough on Pakistani-sponsored terrorism, while securitizing the province of Kashmir, would win him votes in April’s Indian elections, a dangerous gamble considering both India and Pakistan are nuclear powers.

That assumption has since been shattered, as 21 opposition parties, led by Rahul Gandhi’s Congress Party, have banded together to oppose Indian military action in Pakistan. Alongside this twenty one-party alliance, prominent Indians have taken to social media to express their dissatisfaction at the ongoing military operation, criticizing the Indian government and mass media for acting irrationally and fostering a vitriolic nationalism throughout the country and broader Indian diaspora.

Another lesson to learn is how the Indian media covers Pakistan, and by extension counter-terrorism operations like the Balakot strike. News coverage was inconsistent at best and toxic at its worst. Information disseminated was either debunked within hours or fabricated completely, the most prominent example being Indian coverage of the initial Balakot strike.

Indian media outlets declared that over 300 JeM militants had been killed. Within a few hours, Pakistan’s Inter-Services Public Relations (ISPR)—the Pakistani military’s media wing—had posted images of the bomb site on Twitter. Later confirmed by satellite, the images showed that Indian ordnance fell on a mostly uninhabited forest far from the intended target.

A debate has sparked whether Indian ordnance hit uninhabited territory with the purpose of provoking a Pakistani response, or if there was indeed a camp and the weapons simply missed; odd considering they were state-of-the-art Israeli SPICE bombs. Other dubious claims include those regarding Pakistani F-16 fighter jets being shot down by Indian MiGs, which were disproven by Indian experts in television studios. Even the release of Abhinandan was treated as the result of Pakistani weakness rather than a genuine attempt to de-escalate the crisis.

By this point, it became clear that the Indian narrative—and indeed Modi’s government—had lost credibility within a matter of hours. What had started as a pre-emptive response to terrorist groups in Pakistan had quickly descended into a military operation within the sovereign airspace of another state. It also became evident that India had overlooked the fact that both countries possess nuclear weapons, so de-escalation was in the interest of both countries.

The BJP government stands to learn a great deal from the events of that week. Given the lack of conclusive evidence of Pakistani involvement in the Pulwama attack, it is clear that the focus must be on terrorist networks within Kashmir rather than fomenting nationalistic fervor and attacking another country. Pulwama showed that Kashmir is experiencing a homegrown terrorist movement and that India must shift its focus to performing counterinsurgency (COIN) rather than blaming its neighbor for each incident as a knee-jerk response.

COIN, however, can only work with the support of the Kashmiris. Achieving this means giving Kashmiris a forum to air grievances and express any desire for self-determination. Making concessions of this nature will reduce terrorism and consequently stabilize the region—even at the expense of Indian prestige.

Modi’s Pakistani counterpart, Prime Minister Imran Khan, took a far more reasonable and—according to some commentators—“mature” approach to the conflict, prioritizing peace and de-escalation over victory. This, coupled with the release of the Indian pilot, earned him praise from within Pakistan and from the wider international community. Some have gone as far as advocating that Khan be awarded the Nobel Peace Prize for his handling of the issue.

Restraint and sensibility are conducive to effective Pakistani state policy, as opposed than the nationalistic belligerence exhibited by the Indian government. Thus, Khan should adopt sensible approaches to future policy initiatives outside of security.

However, Khan needs to seriously address the elephant in the room: the presence of terrorist groups like JeM operating or based within Pakistan. The presence of JeM and other Kashmiri militant and terrorist groups within Pakistan has been a key issue in Indian-Pakistani Relations since the 1980s. These groups have been responsible for some of the deadliest attacks on Indian soil, such as the 2008 Mumbai attacks and the 2001 terrorist attack on the Indian Parliament.

Though Pakistan has had no direct involvement in these events, their inability to target and apprehend these groups and their leadership, or hand them over to India, has contributed to poor relations and the modus operandi of India blaming Pakistan for any Jihadist terrorist attack in its territory. This cannot continue, and something must be done.

Since 2014, Pakistan’s counterterrorism apparatus has proven effective, having managed the defeat, split, and expulsion of the Tehreek-e-Taliban Pakistan and established a condition of security nationwide. Monitoring or tracking terrorist groups like JeM is entirely feasible and an intuitive approach to ensuring Pakistan’s national security.

As of April 2019, Khan has implemented wide-ranging crackdowns to limit the ability of these groups to operate, both within Kashmir and Pakistan. Should this harder-line policy prove effective, it could lead to a reduction in the capability of armed groups to carry out acts of terrorism on either side of the LoC. Only time will tell if these initiatives are successful.

Read Part One of The Pulwama Incident: The Razor’s Edge