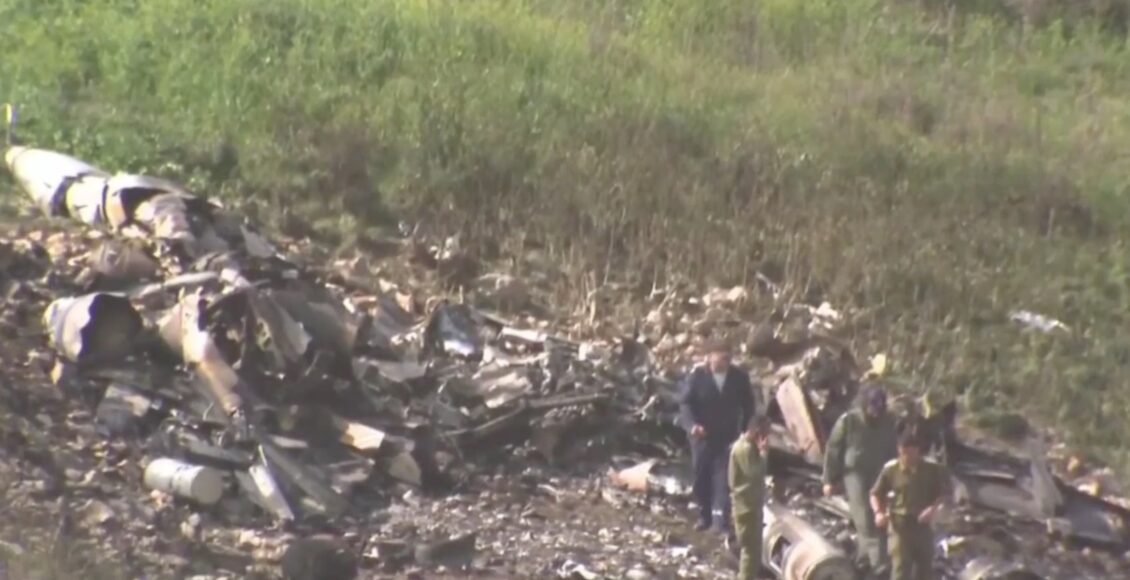 Wreckage of the Israeli F-16 shot down by Syrian air defenses.
Share

Israeli air strikes against Iranian and Syrian targets are the most significant since the Syrian civil war began—raising fears of escalation and war.

Israeli jets carried out air strikes against Iranian targets in Syria after an Iranian drone was shot down near the Israel-Syria border.

Israeli army officials said that the Iranian drone did not cross into Israel by accident, but have not provided more details on the drone’s mission or whether it drone was armed.  Iran has denied that it was operating any such drone.

An Israeli F-16 fighter jet was shot down by Syria air defenses during the offensive. The jet crashed in northern Israel after its pilots ejected from the plane. It is believed to be the first time Israel has lost a jet in combat since 2006.

“Our preliminary understanding is that the plane crashed due to a ground-to-air missile,” Israeli military spokesperson Lieutenant-Colonel Jonathan Cornicus said on Sunday.

Israel then launched a second wave of airstrikes on both Syrian and Iranian military targets in Syria.

The Israeli military said it had inflicted critical damage on targets in Syria in the “most significant attack” of its kind against the country since the 1982 Lebanon war.

Syria’s state media reported that Syrian air defense opened fire in response to an Israeli attack on a military base, hitting more than one plane.

Israeli Prime Minister Benjamin Netanyahu warned that Israel’s policy to defend itself against “any attempt to harm our sovereignty” was “absolutely clear”.

The U.S. Defense Department issued a statement saying that Israel maintains the right to protect itself against acts of aggression.

“Israel is our closest security partner in the region, and we fully support Israel’s inherent right to defend itself against threats to its territory and its people,” said Pentagon spokesman Adrian Rankine-Galloway.

The U.S. State Department later released a statement saying, “The United States is deeply concerned about today’s escalation of violence over Israel’s border and strongly supports Israel’s sovereign right to defend itself.”

Mr. Netanyahu stated that Israel would continue its policy of harsh retaliation for any violation of its sovereignty and security.

“We have made it unequivocally clear,” he said, Israel “will strike back at every attempt to strike at us,” he said.

The air strikes are Israel’s most significant air assault within Syria since the beginning of the Syrian civil war, hitting eight Syrian military sites and four targets the Israeli military said were Iranian installations.

Israel’s actions have raised concerns in Russia, which is supporting the Syrian government along with Iran.

“The creation of any threat to the lives and safety of Russian military servicemen currently in Syria on the invitation of its lawful government to help fight terrorists is absolutely unacceptable,” a statement issued by the Russian Foreign Ministry read.

Prime Minister Netanyahu said that he spoke with Russian President Vladimir Putin and reiterated Israel’s “right and obligation to defend [itself].” Netanyahu and Putin have reportedly agreed that military cooperation between Israel and Russia would continue.