Geopolitical Hotspots: The World in 2018 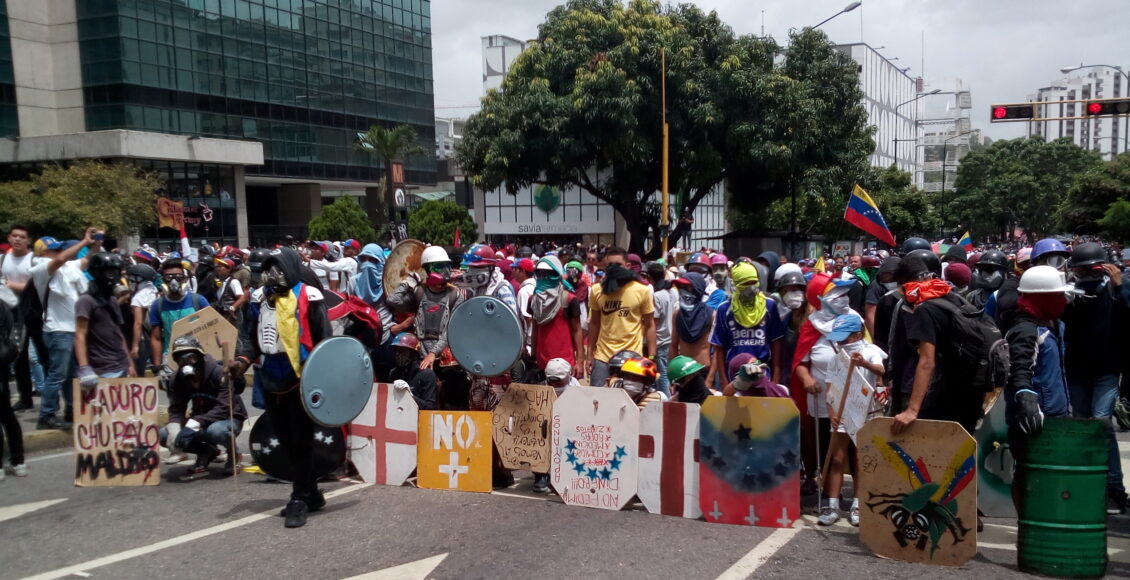 Two thousand seventeen had its fair share of big news stories. The same will be true of 2018. Some of those stories undoubtedly will be a surprise. Not many experts were warning a year ago of an impending ethnic cleansing of the Rohingya in Myanmar. Yet it (sadly) became one of the biggest news stories of 2017. Maybe a year from now everyone will be talking about Egypt’s insurgency and a new financial crisis in the European Union (EU). Or maybe not. As Yogi Berra apparently didn’t say, “It’s hard to make predictions, especially about the future.” But a fair number of significant world events are ones we know are coming—call them the “known knowns.” Here are seven known stories to follow closely in 2018. Any one of them could turn into the dominant news event of the year—or fade completely away. We’ll know in twelve months which will sizzle and which will fizzle.

Iranian leaders must be pleased with how 2017 played out. Syrian President Bashar al-Assad looks to be securely in power in Damascus. Ditto Hezbollah in Lebanon. The Islamic State lost much of its territory. The Iraqi government retook the oil-rich city of Kirkuk. Houthi rebels have Saudi Arabia bogged down in a quagmire in Yemen. Iranian involvement figures prominently in all of these developments, which has entrenched Iranian influence across the region. But this success is not Tehran’s doing alone. Saudi Arabia’s foreign policy missteps have helped as well. Besides its ill-considered Yemen adventure, Riyadh led the effort to embargo Qatar for its alleged pro-Iranian sympathies and support for terrorism.

That has pushed Qatar closer to Tehran and created a diplomatic headache for Washington. (Qatar hosts the largest U.S. airbase in the Middle East.) Still, Saudi Arabia likely retains President Donald Trump’s ear. The new U.S. National Security Strategy vows to “neutralize malign Iranian influence.” Contrary to his campaign pledge, Trump hasn’t pulled the United States out of the Joint Comprehensive Plan of Action (JCPOA). He instead opted to refuse to certify Iran’s compliance. That effectively kicked the issue over to Capitol Hill. Congress has now effectively kicked it back to him. While the White House wants to turn up the heat on Tehran, the question remains how far it will be willing to go. After all, Europe opposes torpedoing the JCPOA, and the White House has its hands full with North Korea. One thing you can be sure of: Iran will press its advantage wherever it can.

Something has to give. Trump has vowed to prevent North Korea from gaining the capability to hit the United States with nuclear-armed ballistic missiles. He’s backed that up with angry tweets and threats to unleash “fire and fury.” So far North Korea isn’t blinking. Pyongyang boasted after its ballistic missile test last month that it “can now reach all of the mainland U.S.” That’s probably not true. However, the trend is not America’s friend. Unfortunately, Washington’s options for compelling Pyongyang to back down aren’t promising. China either can’t—or won’t—use its economic leverage to make North Korea cry uncle. Meanwhile, the cost of U.S. military action would likely be steep—possibly even “catastrophic.”

A diplomatic solution might still be forged. But that would almost certainly require recognizing North Korea as a nuclear weapons power—at the risk that Pyongyang will pocket any concessions and then renege on its commitments. It has done that before. Yes, the United States can rely on deterrence to keep North Korea at bay. That strategy worked against the far larger Soviet threat. The danger is that Kim Jong-un may be willing to take risks that Soviet leaders weren’t. Of course, an assassination, coup, or popular uprising could scramble everything—and not necessarily in a good way. However the situation plays out, the current level of tensions creates the possibility that war will begin not through calculation but miscalculation.

Venezuela should be a prosperous and vibrant country. After all, it has the largest proven oil reserves in the world. Instead, the country is gripped by a horrific economic and political crisis. The fault lies squarely with President Nicolás Maduro. He has implemented disastrous economic policies and run roughshod over the country’s constitution. Hungry Venezuelans bitterly joke about being on a “Maduro diet,” medicine is in short supply, and Maduro’s allies have frustrated efforts to change things at the ballot box. As bad as things were in 2017 for Venezuelans, things could be even worse in 2018.

The International Monetary Fund projects that inflation will exceed 2,300 percent next year. And Maduro has banned three opposition parties from participating in next December’s presidential election. Venezuelans have taken to the streets to protest Maduro’s dictatorial ways. More than one hundred protestors have been killed, but nothing has changed. As a result, hundreds of thousands of Venezuelans have fled to neighboring countries. Latin American countries are divided over how to respond. The United States has already imposed sanctions on Venezuelan officials and may impose more. Trump’s suggestion that U.S. military intervention might be necessary drew rebukes from across Latin America and probably gave Maduro a much-needed propaganda victory. In all, Maduro isn’t likely to go unless Venezuelans make him go.

President Trump has been complaining about America’s “horrible” trade deals since the mid-1980s, and he made it a central theme of his 2016 presidential campaign. But during his first eleven months in office, he spent more time barking than biting on trade. True, he signed a presidential memorandum pulling the United States out of the Trans-Pacific Partnership (TPP). However, he didn’t impose tariffs on China or withdraw from the North American Free Trade Agreement (NAFTA), the Korea-U.S. Free Trade Agreement, or the World Trade Organization (WTO), all steps he either implied or vowed on the campaign trail to take. That may soon change.

The White House is moving to impose punitive actions on predatory Chinese trade practices, its demands for revamping NAFTA look to be unacceptable to Canada and Mexico, and it is waging a low-level war against the WTO. Trump’s push to counter what he calls “economic aggression” could create considerable turmoil abroad—and at home. America’s trading partners are likely to retaliate. No one knows how far such tit-for-tat actions might go. What is known is that some U.S. export sectors would be hurt. Meanwhile, Trump’s trade initiatives won’t fix what bothers him: America’s yawning trade deficit. The United States runs a deficit because Americans consume far more than they save. Tweaking trade deals won’t change that. To make matters worse, the tax bill he has championed will likely make the trade deficit larger.

Xi Jinping had a terrific 2017. He consolidated his hold on power and now ranks as China’s most powerful leader since Mao Zedong. The question is, how will he use his new status? To judge by his 205-minute speech to China’s National Party Congress in October, he won’t be sitting on the sidelines; he will be flexing his muscles. He used the terms “great power” and “strong power” twenty-six times in his speech. Xi’s assertive foreign policy will likely mix soft and hard power.

He will be offering substantial aid to countries throughout Asia under the banner of the One Belt One Road initiative. Most countries will find it hard to pass up these funds, even if they sometimes come with substantial strings attached. Beijing will also be supporting sympathetic politicians and groups overseas, a tactic that has started to trigger a backlash. The vinegar supplementing the honey will be China’s continued effort to turn the South China Sea into a Chinese lake. Countries in Southeast Asia will be watching closely to see whether, and how, the United States pushes back on China’s effort to make itself the regional hegemon. A world order may hang in the balance.

Americans aren’t the only ones watching to see what happens with the investigation Special Counsel Robert Mueller is conducting. Foreign capitals are as well. President Trump has called the investigation a “witch hunt,” and he dismisses allegations that his campaign colluded with Russia as “fake news.” Partisans on both sides think they know how the investigation will turn out. We’ll see who is right. What we know for sure is that Trump’s former National Security Advisor Michael Flynn has pled guilty to lying to the FBI, as has former Trump campaign advisor George Papadopoulos. Mueller also has indicted Trump’s former campaign manager, Paul Manafort and Manafort’s business partner and senior Trump campaign staffer, Rick Gates.

Trump’s lawyers predict that the investigation will wrap up shortly; history suggests it could drag on for months. At a minimum, the investigation distracts White House attention from policymaking and raises doubts overseas as to whether Trump has the political capital to carry through on his threats and promises. At the maximum, the investigation could plunge the United States into an unprecedented constitutional crisis. Whether we get either extreme or an outcome somewhere in between, America’s democracy is being tested. We’ll see if we live up to the framers’ expectations.

Democracy is under siege. Just examine the rankings that Freedom House generates—global freedom has been declining for over a decade. The problem isn’t just that emerging democracies like Thailand and Turkey have slid back into authoritarian rule, though that’s bad enough. Many Western democracies are struggling as well. The EU is threatening to strip Poland’s voting rights in EU institutions because Warsaw has adopted anti-democratic laws, while Spain faces a secessionist movement in Catalonia. Centrist political parties across Europe have been losing vote shares to parties on the two extremes. Traditional center-left parties have had the most trouble, having suffered humiliating defeats in the Netherlands, France, and Austria among other places. But center-right parties are struggling as well, as recent elections in Britain and Germany attest.

The United States still has a robust two-party system, but its democracy also seems far from its glory days. Congress struggles to carry out is most basic function, funding the government, Trump regularly violates longstanding democratic norms, and many Americans view members of the opposite party unfavorably. It’s not surprising, then, that some now see the United States as a “flawed democracy.” Authoritarian governments like China and Russia are both working, in different ways, to undermine free and fair elections across the globe. Is democracy doomed? No. It remains popular worldwide, even if it has become less so among young people in democratic countries. There will be important elections in 2018 that could reverse the negative trends, though they might also give us more “illiberal democracies.” Here’s the thing about democracy: it empowers the people. It’s up to them to use that power wisely.

Corey Cooper and Benjamin Shaver contributed to the preparation of this post.