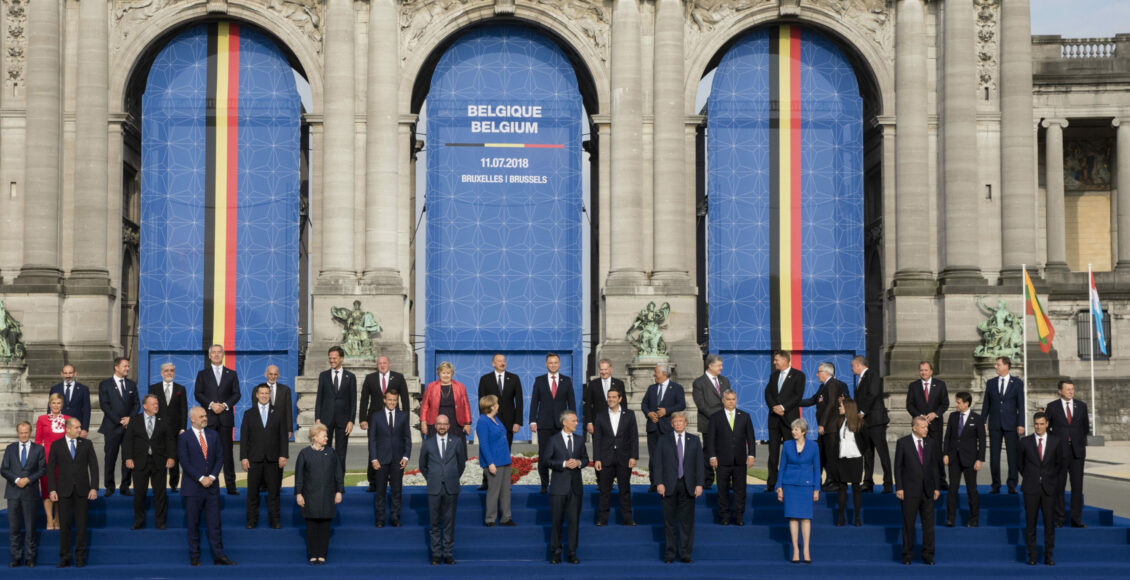 A meeting between transatlantic allies has rarely been met with such anticipation as the recently concluded NATO summit in Brussels.

The tone of the summit was set well in advance following President Trump’s criticism of NATO members failing to spend 2% of the GDP on defense expenditure. The United States, in this regard, has been contributing the bulk to what the U.S. President sees as a collective defense organization, in which member states need to contribute equally for their security and thus not be seen as free riders. Notwithstanding the real challenges that the E.U. faces in the form of growing terrorist attacks on European capitals, social tensions, and Russia’s hybrid warfare strategy to influence western governments, the discourse of the summit centered around Trump’s persistence over increased defence spending and his criticism for the German government which has only grown ever since he took over the U.S. presidency.

The narrative that drives President Trump’s criticism towards western allies is based on the changing perception of the United States towards transatlantic alliance as a whole. To understand this changing perception, it is important to shed light on the reasons that led the U.S. to support European integration and security in the first place.

The United States supported European integration for myriad reasons. First, European integration served as a way of containing Germany and tying it tightly to western institutions, namely the E.U. and NATO. Second, supporting and strengthening European allies served as a viable way of containing Soviet expansion in Europe. Third, a strong European alliance meant reduced American burden for economic and military security of Europe in the long run. Fourth, European integration was a valuable mean of ensuring that no European power develops hegemonic tendencies and that a unified bloc would serve as a balance against the Soviet Union, thereby limiting Soviet threat to the European theatre. In other words, the idea was that an integrated Europe would serve U.S. long-term security and economic interest.

In particular, NATO was formulated as a military alliance with a singular purpose of protecting western Europe against the Soviet threat. The alliance was formed with the idea that, U.S. security guarantee would enable western European countries, to develop and strengthen their economies and military capabilities to counter Soviet expansion.

The threat of common enemy worked in favor of both the United States and western European countries. The European countries had the geographical risk of bearing the cost of a war in mind, while for the Americans, the Soviet threat enabled it to be a key player in European geopolitics. The common threat served as a binding factor, which kept the alliance together during the Cold War.

Not much changed following the end of Cold War and disintegration of the Soviet Union. Although the Soviet Union did not exist anymore, the idea of European integration expanded as central and eastern European countries that were previously under Soviet influence, wanted to be part of the western bloc. Even NATO which no longer had Soviet threat to counter expanded as more and more post-communist countries kept applying for NATO membership. The trend continues to date.

The rationale behind the expansion was to bring post-Soviet countries into the framework of common western defense and economic system, which would solidify their transition into the western democratic system thereby making the continent peaceful. For post-communist countries, entry into E.U. and NATO meant economic prosperity and national security from Russian aggression. For the United States, E.U. and NATO enlargement meant the expansion of western influence.

Since more and more countries were becoming part of the alliance and since the bloc functioned on consensus, the U.S. would always have a say as far as its interest in Europe were concerned. Increased European integration would thus enable the United States to focus its attention towards Asia- Pacific, where a rising China is seen as a challenge to global U.S. dominance.

However, things started to change following the global economic crisis of 2008-2009 and its subsequent effect on European economies. European integration which was thought to reduce conflict and encourage consensus behavior resulted in producing divergence on many issues related to economic management and border security. Most European countries have become skeptical of Germany’s behavior within the E.U. Some even debate, Germany as the economic hegemon of Europe. This is true to some extent. Germany is in many ways the economic powerhouse of Europe, with a healthy economy, high wage rate, and low unemployment.

However, that growth is primarily because E.U. member states and the United States absorb Germany’s surplus products. Germany produces more than it consumes and to sell the surplus it needs markets. The free trade agreement with E.U. and a healthy trade relationship with the United States provides Berlin with the advantage of selling its surplus. In fact, it was the United States, which absorbed German exports following the global financial slowdown of 2008-09 which in many ways cocooned the German economy from economic instability.

The problem with Germany’s growth is that it is seen as one-sided. The criticism that follows Berlin is that it is too concerned about its economic well being than taking into account the broader security concerns of its NATO allies. For the United States, the German government is seen as a free rider when it comes to economic and security policy. At present, Berlin enjoys a trade surplus of over 50 billion euros with the United States. German contribution to the NATO budget, however, stands at just 1.2% of the GDP which is the lowest when compared to some of the other powerful economies in Europe.

Germany does have a plan to increase its defense spending to the agreed-upon target of 2% by 2024, but the current low contribution figure does not go down well with Eastern European countries and the United States, who see Berlin’s unwillingness to counter Russian aggression and the need to spend more on defense as a problem.

Furthermore, Germany’s tight grip on deciding fiscal rules for the bloc and forcing member states to agree on its refugee policy is seen as the imposition of German preferences on matters that concern German interest. For the United States and Eastern European countries, Germany’s relationship with Russia is at best seen as dubious. A case in point, the Nord Stream II pipeline which President Trump called out during the recent NATO summit. Nord Stream II is a joint project between German and Austrian companies and Russia’s Gazprom. On completion the pipeline will enable Russia to deliver gas directly to Germany, bypassing existing pipelines that run through Ukraine.

In other words, Nord Stream II will enable Russia to deliver gas to European customers without having to pay transit fees to Ukraine. The pipeline project has been heavily criticized by the European Commission, the United States and countries like Poland and Ukraine for making Europe more vulnerable to Russian pressure. The United States and Eastern European countries consider the pipeline project as detrimental to European security. Germany, however, does not and it continues to go ahead with the project. For Berlin, the pipeline is a viable mean of securing energy needs at affordable prices and at the same time, maintain its economic engagement with Russia.

Therefore, what emerges now is a divergence of interest at many levels. For the current U.S. administration, the behavior of certain European allies, Germany, in particular, is seen as problematic considering that it was the U.S. security guarantee that enabled Europe to grow economically. Trump, who sees maintaining a military alliance and burden sharing on the same scale, getting away with everyday assurances is not going to be easy.

President Trump has already threatened that the U.S. could go its own way if allies don’t contribute. Such a threat is not assuring to the unity of transatlantic alliance as a whole, given the already extensive areas of divergences from climate change to Iran nuclear deal to protectionist trade policies and Russian aggression in Europe. However, it is not to say that the geopolitical reality of having a strong E.U. and NATO is not paramount to U.S. interest or that the European allies can function without the U.S. role in European security. But given the differing perception of allies on a whole number of issues, it is hard to imagine how long can transatlantic partners work together.