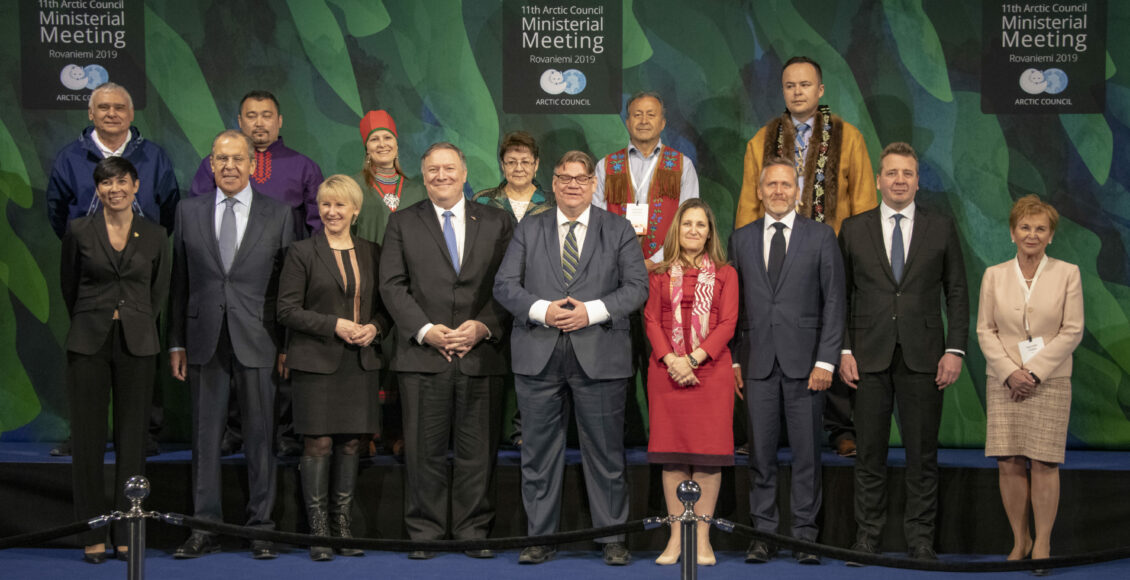 Foreign Ministers of the Arctic Council pose for a family photo at the 2019 Ministerial Meeting.
Share

The Arctic Ocean may be the world’s smallest and most shallow, but this by no means negates the region’s geostrategic significance.

Over the years, global climate change severely and observably impacted the environment, resulting in rapidly melting glaciers, ice covers on rivers and lakes breaking up much earlier than anticipated, and unprecedented levels of animal migration, as increasing numbers are displaced from their natural habitats. According to the Intergovernmental Panel on Climate Change (IPCC), the global temperature could increase from 2.5 to 10 degrees Fahrenheit over the next century.

The melting of the Arctic sea ice has coincided with the discovery of energy deposits as well as the development of the technology needed to access those resources. These developments have caused the members of the Arctic Council—states with territorial claims in the Arctic—to pay increased levels of attention to the region.

The Arctic Council is made up of Canada, Finland, Denmark (Greenland), Iceland, Norway, Russia, Sweden, and the United States (Alaska). Of these, Canada and Russia hold the most territory (Russia controls the most Arctic territory of any Arctic state). Being a party to the United Nations Convention on the Law of the Sea (UNCLOS), which states that a country’s Exclusive Economic Zone extends 200 nautical miles offshore, Russian claims cover approximately 40 percent of the Arctic.

The Arctic plays host to substantial natural resources. A 2008 report released by the United States Geological Survey (USGS) estimated that the Arctic holds around 1,670 trillion cubic feet of natural gas, 44 billion barrels of liquid natural gas, and 90 billion barrels of oil—the vast majority of these being offshore. As more territory becomes accessible, excess reserves of gold, zinc, nickel, and iron already found in part of the Arctic may be discovered. From the connectivity perspective, the two major sea routes that permit ships to pass through the Arctic run along the Russian and Canadian coasts, i.e., the Northern Sea Route and the Northwest Passage.

The Northern Sea Route runs from the Barents Sea, near Russia’s border with Norway to the Bering Strait between Siberia and Alaska. The Northern Sea Route (NSR) would dramatically reduce the transit time for ships traveling from East Asia to Western Europe. On the other hand, the Northwest Passage connects the Atlantic and Pacific Oceans through the Canadian Arctic Archipelago.

Shipping lanes connecting Europe with East Asia currently run from the Mediterranean through the Suez Canal to the Red Sea, transiting the Malacca before reaching East Asia. The distance is roughly 21,000 kilometers (13,049 miles) and the typical transit time is around 48 days. The Northern Sea Route would cut the distance to 12,800 kilometers, reducing transit time by 10 to 15 days. According to a paper published by the CPB Netherlands Bureau for Economic Policy Analysis:

Are Afghanistan’s Mineral Deposits the Answer to the…

“The direct impact of the opening of the NSR is that international shipping (volume by distance) is reduced by 0.43%, but global trade volumes increase by 0.21%. The total percentage of world trade that will be rerouted through the Northern Sea Route will be around 5.5%.”

The paper further estimates that 15% of all Chinese trade will be through the Northern Sea Route. The optimization of the NSR will result in a significant rerouting of the world shipping lines and would have a drastic impact on the usage of the Suez Canal and the Malacca Straits to reach the Southeastern and East Asian Markets. According to CPB research, roughly 8% of global trade currently transits the Suez Canal, and it is estimated that level would be reduced by two-thirds once the Northern Sea Route becomes fully operational. To illustrate, from 2008 to 2012 the average number of commercial ships transiting the Suez Canal each year was approximately 15,000—the re-routing of vessels through the NSR, according to CPB research, would reduce that number by 10,000.

The rapidly melting sea ice has prompted some analysts to predict that the shorter shipping route could largely replace the Suez Canal Route that connects the Red Sea and the Mediterranean Sea. Such a conclusion overlooks the fact that ships using the Suez Canal Route make stops at ports in Southeast Asia and the Middle East when transiting between Europe and East Asia. In other words, to be commercially viable, large container ships using the Suez Canal route need to make deliveries to several customers along the way.

In contrast to the Suez Canal Route, the territory that lies along the Northern Sea Route is sparsely populated, meaning low demand for imported goods. Moreover, replacing one trade route with another could have a drastic impact on the economies of the countries that rely on the transit fees of the southern maritime trade route. Lastly, the Northern Sea Route is only safe to navigate during the summer when the straits are relatively ice-free. Even then, escort icebreaker vessels are often necessary to navigate the waters as there is always a risk of unpredictable ice conditions. Additional variables, such as a lack of search and rescue teams and support infrastructure, along with high insurance premiums for shipping vessels, need to be taken into account when evaluating the viability of the Northern Sea Route.

This is not to say, however, that the NSR is not a serious competitor to the southern sea route. Many scholars have argued that global shipping companies may become more interested in the NSR as it becomes more accessible and viable when compared with the longer and piracy-prone traditional Suez Canal Route. Specifically, the NSR makes more economic sense for shipments of oil and liquid natural gas (LNG). Increased energy trade through the NSR would largely benefit Russia, which has heavily invested in maritime transport ventures and energy projects in the Arctic.

The Russian government’s planned Murmansk Transport Hub will construct new roads, railway infrastructure, ports, and other facilities on the western side of the Kola Bay. It is described as one of the biggest infrastructure projects in Russia and by far the largest in the Arctic. There are also plans to upgrade the M18 highway between Murmansk and the Norwegian border. The new road will significantly improve the route between the border towns of Nikel, Russia and Kirkenes, Norway. The Sabetta Port project is a joint project undertaken by Novatek and the Russian Federal government to service the Yamal LNG project and a nearby gas field operated by Novatek. The port will facilitate gas shipments of both eastwards and westwards along the Northern Sea Route. Furthermore, the Russian government also plans to produce the LK-60 icebreaker and the LK-60 II icebreaker, which are required for cargo ships to access the NSR.

The economic benefits of the Northern Sea Route, combined with large-scale Arctic infrastructure development projects and the existence of substantial energy resources of energy resources to be tapped, make the Arctic a lucrative prospect for Russia and the other Arctic states. However, the strategic desirability of the Arctic trade route will depend on many factors, including the continuous melting of ice, development of modern vessels to sustain harsh weather conditions, an upward trend in global trade, increased demand in Asian markets, persistent piracy around the Horn of Africa, growing instability in the countries around the Suez Canal region, and heightened congestion in the Strait of Malacca. All these factors will further contribute to the geostrategic importance of the Arctic as a natural resource and transportation hub. At the same time, however, the growing importance of the region may also lead to increased competition.