What to Watch For in Post-ISIS Iraq and Syria 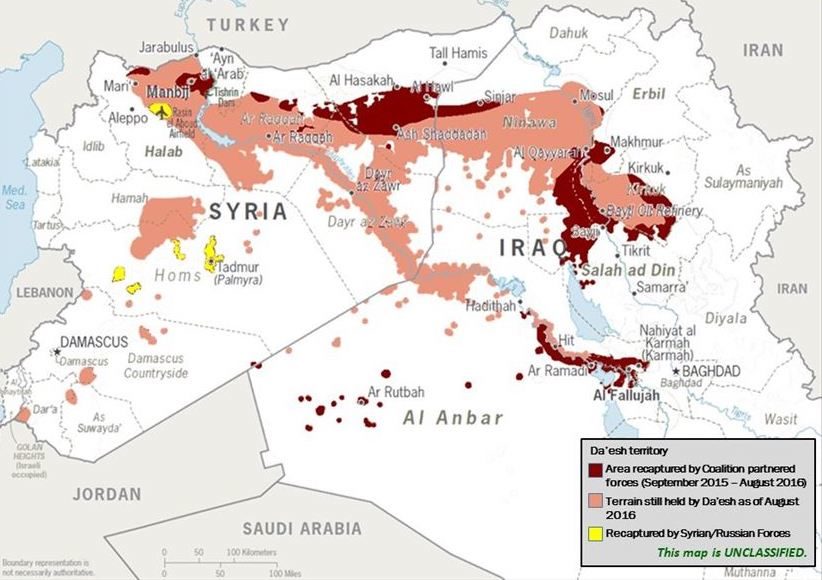 As the campaigns to wrest the Islamic State from the territory it held in Iraq and Syria near completion, new conflicts may arise if old political arrangements prevail.

The self-proclaimed Islamic State, once estimated to have occupied a third of Iraqi and Syrian territory, has been reduced to a handful of enclaves, bringing a complicated endgame into focus. In July 2017, Prime Minister Haider al-Abadi declared victory in Mosul, as his troops, with U.S. backing, recaptured Iraq’s second city.

In Syria, the Kurdish-led Syrian Democratic Forces (SDF) recaptured the Islamic State’s self-styled capital of Raqqa in October, and the SDF and forces loyal to President Bashar al-Assad are both closing in on the Islamic State in its final eastern redoubt.

The rapidly receding footprint of the Islamic State has raised the risks for new confrontations as various armed groups in Iraq and Syria, and in some cases, their foreign backers, vie for influence in the newly liberated areas. Meanwhile, experts warn that if the victors in both countries fail to make political arrangements that accommodate civilians and facilitate the return of refugees, the hard-fought military campaigns may only lay the groundwork for future cycles of insurgency and counterinsurgency. The following is a sketch of security, displacement, and reconstruction concerns in both countries.

Security. Iraqi forces’ entry into Hawija in October marked the Islamic State’s loss of the last remaining city under its control. Three major armed groups remain in territory formerly held by the Islamic State: the Iraqi military, mostly Shia quasi-state militias, and the Kurdish peshmerga. They are cooperating with each other in some instances and competing in others.

The Islamic State’s sweep through Iraq in 2014 highlighted how the Iraqi military had been hollowed out by corruption, but recent advances showed how the force had been reconstituted; it is now regarded by many Iraqis as a professional force. Even so, the counterterrorism forces have been exhausted by the pace of the campaign for Mosul and other major cities, and both Iraqi forces and predominantly Shia militias have faced accusations of abuses, including extrajudicial executions of people suspected of collaborating with the Islamic State and collective punishment of their families.

A U.S.-led international coalition has backed Iraqi forces, primarily through air power. Most U.S. forces are advising the Iraqi military, though special forces have served on the front lines. The White House has set a cap on U.S. troops in Iraq of 5,262, but the number actually deployed at any particular time may be higher.

Also on the battlefield are Kurdish peshmerga, whose ranks may exceed 150,000, and Popular Mobilization Fronts (PMFs), predominantly Shia, numbering more than sixty thousand. Many are loyal to Iran, while others are loyal to the Iraqi clerics Moqtada al-Sadr or Grand Ayatollah Ali al-Sistani. A significant challenge for the state will be incorporating them into the conventional security apparatus. Another will be accommodating local armed Sunni Arab tribal groups. These various armed groups are jockeying to control territory abandoned by the Islamic State.

Iraqi Kurds are contesting oil-rich, ethnically mixed territories adjacent to the Kurdistan Regional Government’s three provinces, where they have had autonomy since 1991. But these territorial claims have highlighted tensions between Kurdish factions, as well as between the Kurds and others. At the center of the dispute is Kirkuk, a city occupied by Kurds since their initial advance against the Islamic State in 2014. Iraqi forces raised the national flag there once again in October 2017, apparently welcomed by the local ruling Kurdish party, the Patriotic Union of Kurdistan (PUK). The PUK has been uneasy with the drive for independence led by the rival Kurdistan Democratic Party (KDP), which rules from the Iraqi Kurdish capital of Erbil.

The Islamic State’s last Iraqi enclave lies in western Anbar Governorate, along the Syrian border. Having lost the vast majority of its territories, analysts expect Islamic State militants who have fled the Iraqi military and militias to shift to guerrilla tactics.

Displacement. More than three million Iraqis are internally displaced. A third of them [PDF] are displaced within Nineveh Governorate, of which Mosul is the capital; some eight hundred thousand people are displaced from the city. Another fifth are in the Kurdish provinces of Erbil and Dohuk, In areas where there was little destruction, such as Mosul’s eastern half or Tal Afar, the displaced have been quick to return home, but elsewhere housing stock and infrastructure have been destroyed, and public services remain minimal, and many residents remain in makeshift camps. Tribal leaders in some cases have blocked the family members of suspected militants from returning home.

Reconstruction. Much of Mosul, particularly the western Old City, was destroyed, mostly by air strikes carried out by the U.S.-led coalition against entrenched Islamic State fighters. The United Nations estimates a third of the housing stock there has been destroyed; so too has much of the public infrastructure, including roads, bridges, and water and electrical supply. Islamic State militants blew up the landmark al-Nuri Mosque and left behind mines and booby traps that have killed hundreds and could take more than a decade to clear. Also in urgent need of repair is the Mosul Dam, whose failure could jeopardize the livelihoods of millions of Iraqis.

Repairing basic infrastructure in Mosul alone could cost more than $1 billion, according to a UN official, and altogether, the Iraqi government has estimated that rebuilding the country will cost in the realm of $100 billion. Particularly given the decline in oil prices, which has left the state running a deficit, Iraq will depend on foreign assistance. But corruption is endemic [PDF], so countries and multilateral institutions may be reluctant to extend funding. The United Nations’ 2017 appeal for humanitarian funding was just shy of 50 percent met as of August.

Security. The Islamic State’s remaining presence is more substantial in Syria than Iraq, but with U.S.-backed, Kurdish-led forces declaring victory in Raqqa, territory in Deir ez-Zour Province remains its last stronghold. Islamic State fighters there are under fire from both Bashar al-Assad’s forces, backed by Russian air power, and Kurdish-led ones supported by the U.S.-led coalition.

U.S. officials are in northern Syria laying groundwork for the administration of Raqqa. The SDF backs civilian governance structures there, and U.S. forces are training a militia to police the city. It is unclear how much control the Democratic Union Party (PYD), the Syrian Kurdish political party, will have in these areas; in other Arab-majority areas the SDF liberated from the Islamic State, such as Manbij, PYD cadres are the ultimate authorities, and some suspect that Kurdish fighters will claim the territories they liberate for their de facto autonomous region known as Rojava.

Circumstances will grow even more complicated in Deir ez-Zour Province. New tensions might arise if the Sunni Arab majority there sees Kurds administering their territory as occupiers. Meanwhile, other nearby armed groups may enter the melee as their foreign backers—primarily Iran and Turkey—vie to secure influence in territories that are unlikely to return to Damascus’s centralized control. Among those groups are Iran-backed PMFs crossing over from Iraq and Sunni Arab rebel forcesthat had been backed by Jordan and the United States. Some observers believe Syrian Kurds are grabbing up territory in the oil-rich province as leverage to press for autonomy under a future settlement. The U.S. military has outposts across this region, and as the Islamic State’s footprint is diminished, clashes between these various forces will grow more likely, analysts say.

Displacement. With both the campaign against the Islamic State and the broader civil war winding down, some internally displaced Syrians are returning home. The International Organization for Migration reports that more than six hundred thousand did so in the first seven months of 2017, out of more than six million in all, though it cautions that not all returns were voluntary.

An additional five million Syrians are refugees in countries bordering Syria, and about a million have applied for asylum in the European Union. As war wanes, countries hosting refugees may face popular pressure to declare Syria safe for refugees’ return, as some have for Afghanistan. (Jordan has reportedly already deported registered refugees.) But while Syria is likely to remain divided among various spheres of influence, Assad’s continued rule from Damascus appears assured, and would-be returnees fear conscription or arrest, if not open fighting.

Reconstruction. The campaign against the Islamic State, as well as the broader civil war, has ravaged Syria. Some 7 percent of its housing stock has been destroyed, and another 20 percent damaged, the World Bank found. Likewise its educational and health-care systems have been largely destroyed, as well as much of its physical infrastructure. Rebuilding the destroyed physical capital could cost between $100 and $200 billion, according to an IMF study [PDF], but the damage to intangibles—destroyed institutions and networks that facilitate economic activity—may have exacted an even higher cost, according to a World Bank study.

The scale of the destruction is so great that reconstruction could not be done without a massive infusion of international aid and loans, but analysts warn that any such funds would likely end up in the coffers of Assad’s cronies or local power brokers loyal to him, and be used to reward loyal communities at the expense of others.

An April conference in Brussels sought to muster international support for reconstruction, but concluded that it could not successfully be done without a “genuine and inclusive transition that benefits all the Syrians.” The participants intended the prospect of international financing to incentivize the warring parties to return to what has been a fruitless UN-sponsored peace process years in the making. Assad, however, appears disinclined to compromise his authority, and he could instead turn to China, Iran, and Russia for financing.

Thanks for signing up! Please check your inbox for an email confirming your subscription.
Via The Council on Foreign Relations
IranIraqRussiaSaudi ArabiaSyriaTurkeyUnited States
Share
You might also like
Defense & Security