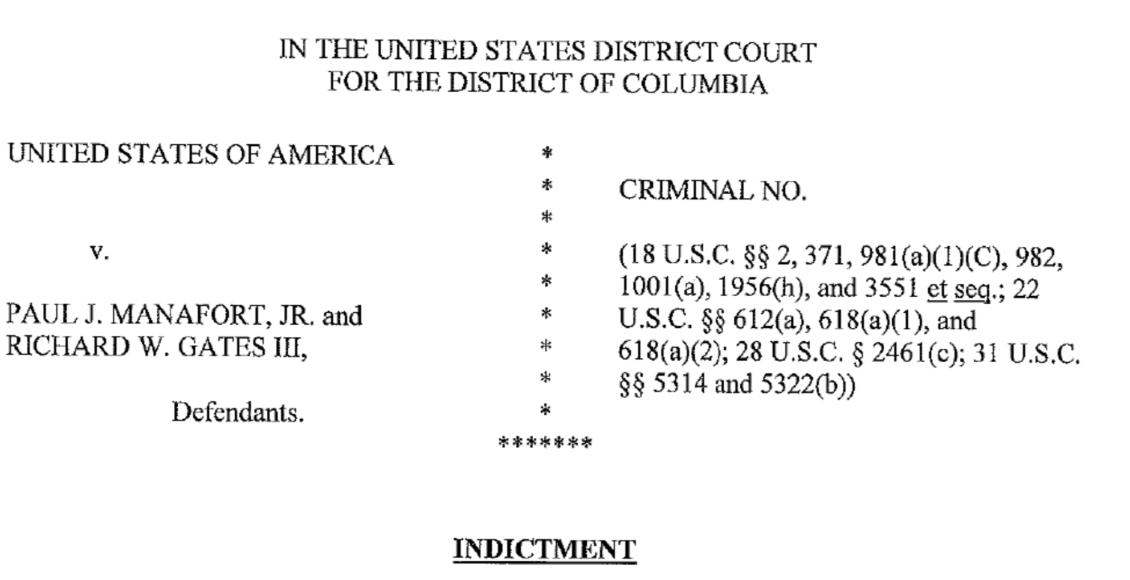 Trump Campaign Chair and associate were charged on 12 counts, including conspiracy against the United States and money laundering.

The indictment alleges that Manafort and Gates funneled over $75 million through offshore accounts and that Manafort himself laundered more than $18 million to fund property acquisitions, home renovations, and private school tuition.

Manafort and Gates are alleged to have received tens of millions of dollars in income as political consultants in Ukraine. The indictment states that to hide that income, they laundered it through “scores of United States and foreign corporations, partnerships, and bank accounts.” Manafort and Gates consulted pro-Russia Ukrainian politicians on lobbying, public relations, and political strategy. Gates is referred to as “Manafort’s right-hand man” in the 32-page indictment.

A primary focus of their work in Ukraine was the advancement of the pro-Russia Party of Regions, and their presidential candidate Viktor Yanukovych, who would be elected in 2010. Yanukovych would later flee to Russia in 2014 amidst widespread uprisings in Ukraine.

In the indictment, Mueller highlights an entity called the European Centre for Modern Ukraine as “a mouthpiece for [deposed Ukrainian President ] Yanukovych and the Party of Regions.” It is alleged that the Centre was part of a “cover story” that was developed by Manafort and Gates to distance themselves from their work in Ukraine.

U.S. law mandates that when American citizens are engaged in work for a foreign country, they must register as foreign agents of that state, as stipulated under the Foreign Agents Registration Act (FARA). Neither Manafort nor Gates registered as foreign agents during their time working as consultants for then-President Yanukovych.

A critical aspect of the indictment is that Special Counsel Mueller is seeking the forfeiture of assets obtained using laundered money on which no taxes were paid. The assets listed in the charges include a life insurance policy, and multiple properties, including Manafort’s residences in Virginia and the Hamptons, New York.