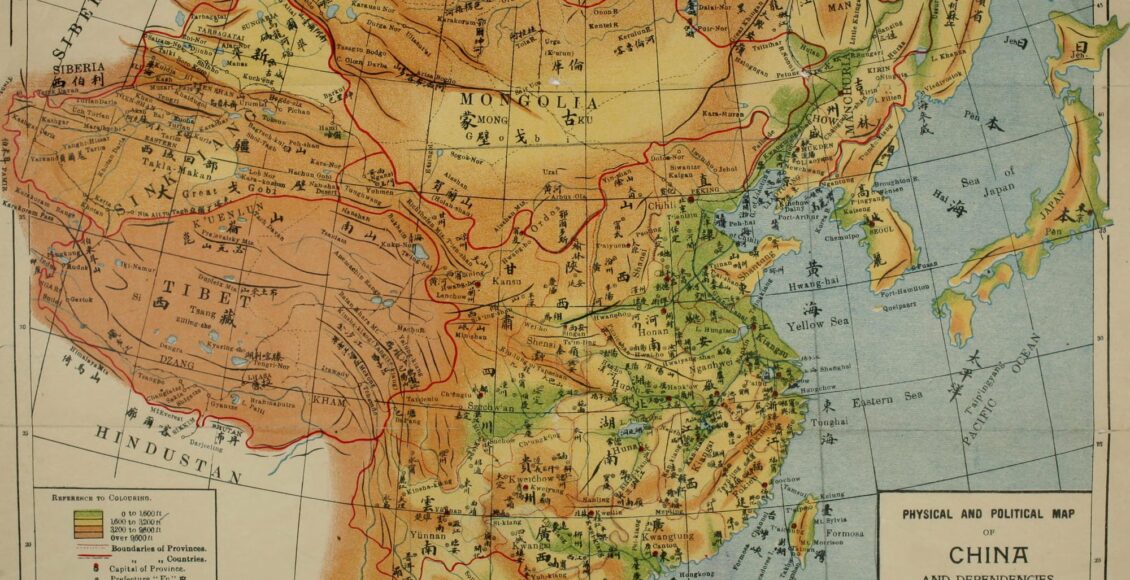 China’s approach to international relations and foreign policy has been shaped by its geopolitical history.

China’s vast amounts of territory are inhabited by diverse groups of people—each with distinct cultural, political, economic, and religious traditions. Today, the Chinese Communist Party aims to forge a single, homogeneous “Chinese” national identity. Beijing is implementing policies designed to effectuate the forced ethnic and cultural assimilation of minorities like the Tibetans and the Uyghurs of Xinjiang.

This lack of a singular national identity was further compounded by a geographical landscape that impeded the establishment of a multipolar regional order like that of Europe. Europe’s plains and uplands are divided by rivers and mountain ranges—a vast swath of territory that enabled the rise of multiple, sovereign nation-states.

Eventually, European imperialist ambitions would extend this competition to the Americas, Africa, and Asia. As competing sovereign entities, European nation-states were actors an evolving political system that would eventually become known as the balance of power. This system upended the universalist status quo following the Peace of Westphalia in 1648. The term balance of power gained significance in the aftermath of the Treaty of Utrecht in 1713.

China’s topography isn’t conducive to balance of power politics. Where the Europeans had space to expand and develop distinct national identities, China’s various competing groups had competed with one another for supremacy in the absence of a strong central authority. Each ruling dynasty followed a similar path to power, with minor exceptions.

Controlling the Chinese heartland allows for the control over all of China.

The Yangtze Plain, by contrast, generated dynasties that instantly succumbed either to their weaknesses, like the Southern Song in the twelfth and thirteenth centuries or to their northerly competitors like the short-lived nationalist government did in the twentieth century.

The North China Plain’s political importance is primarily due to its geography. Unlike areas to the south, the North China Plain expands mostly uninterrupted by mountains and has fewer rivers. This facilitated rapid communication by horseback. This resulted in a mostly homogeneous linguistic makeup, relative to the many different languages and dialects that are found throughout southern China. The ability to communicate rapidly across a significant distance allowed political and economic power to be concentrated along the North China Plain.

While the North China Plain was primarily the political center of China after the tenth century, it was control over Zhongyuan (中原)—the Central Plains—that was central to the survival of any ruling dynasty. Each understood that control over the Central Plains—the Chinese heartland—would enable for the control over all of China. This principle, the “Heartland Theory” was laid out by British economic theorist Halford Mackinder in The Geographical Pivot of History.

Historically, China’s international relations were based on suzerainty rather than sovereignty.

The area that comprises the Chinese heartland is less than one-third the size of the European plains, albeit with a substantially higher population. These demographic and geographic variables inhibit the development of a system of competing sovereign states. As such, the concept of sovereignty was nonexistent in imperial China.

Whereas the great powers of Europe looked upon rival powers as peers and understood the concept of sovereignty, China held no such outlook. Up until the nineteenth century, China’s international relations were based on the idea of suzerainty. China considered itself to be without equal, seeing itself as the world’s cultural and political center. It managed its international relations through a tributary system.

The Mandarin word for China is Zhongguo (中国), which translates literally as the “Middle Kingdom.” This Sinocentric perception can be primarily be attributed to China’s geographical reality and the fact that it possessed no notion of national sovereignty. Political scientist Suzanne Ogden has discussed Chinese international relations as being fundamentally based on the concept of universal morality, one that is developed, implemented, and imposed on others by a single entity. This belief of “moral persuasion and cultural superiority” as Ogden puts it, is a significant driver of the narrative of Chinese exceptionalism.

East Asia expert Alan M. Wachman explains that the Chinese emperor’s sovereignty or rule over the imperial Chinese state was “potential, not actual, control.” As such, the degree to which the emperor’s authority was accepted depended on the period and location in question. This belief guided the nation through generations of unification, expansion, fragmentation, and decline, prescribing an approach for handling each phase in the cycle.

At times of dynastic corrosion and rebellion, for example, defense and military strategy had been the answer for aspiring leaders. Furthermore, major infrastructure development projects like the Grand Canal and military incursions in the broader region helped a dynasty secure the “mandate of heaven”—thereby legitimizing its hold on power.

The bureaucracy was and is essential to central government’s exercise of political power. Auxiliary tiers of bureaucratic authorities within the central government’s control extended from the heartland to the rest of China, and beyond. Utilizing a tributary system of appointed officials and in rare circumstances, military forces, China’s leaders were able to diffuse their power within Central Asia, into the Korean Peninsula, and throughout Southeast Asia, consolidating their control over the heartland, China, and the world as they saw it.

Chinese notions of geopolitics failed to account for the importance of maritime power.

During the seventeenth century, however, the onset of the maritime era would interrupt China’s illusions of being a separate realm. Naval invaders began arriving on the nation’s shore, where the Manchu rulers of the Qing dynasty, China’s last imperial dynasty, would eventually meet them.

Although the Manchu Qing possessed what Mackinder called the “superior mobility of horsemen and camelmen,” their approach to repelling invasions was no different from that of the previous ethnically Han Ming dynasty. Where the Han Ming dynasty constructed the Great Wall to protect against the Manchu, the Qing erected fortifications along the shoreline to keep foreign invaders at bay.

At that point, China hadn’t developed significant naval assets of its own, and its conceptualization of geopolitics wouldn’t include maritime power for three centuries. Even then, the geostrategic implications of robust naval power would garner little notice within China before Japan used its superior naval power to achieve victory over China in the first Sino-Japanese War of 1894 and 1895.

China’s defeat marked the beginning of another era of decline and the demise of the Sinocentric view of international relations. It took the so-called “century of humiliation” for China to comprehend that this worldview was no longer compatible with the rest of the world.

The broader geopolitical strategy which prevailed in the West did not serve the European powers far better. After fighting for control of the Eurasian landmass, what Mackinder dubbed the World Island, they emerged from two world wars and innumerable smaller conflicts only to see that the center of international power had moved across the Atlantic Ocean to the United States.

Contemporary Chinese foreign policy is rooted in the successes and failures of the past.

As maritime and land-based powers (the United States and the Soviet Union, respectively) expanded their spheres of influence across the globe, the combination of territory on the border of the Eurasian landmass and a shoreline seemed to sentence China to be on the margins of the international system.

Nevertheless, under the rule of the Chinese Communist Party, China overcame its geographical circumstances, and in the process, its reasoning has evolved. The trials and tribulations it suffered through in the second half of the twentieth century, including the wars on the Korean Peninsula and in Vietnam, a U.S. naval quarantine, and concurrent pressure from the Soviet Union, encouraged China to realize its capabilities. The geography that once seemed a curse to Chinese theorists now brimmed with possibility.

The country’s location, in the end, provides it access to developed economies overseas and overland access to precious energy assets in Central Asia and the Middle East, an edge that economic theorist Nicholas Spykman identified in the early 1940s. China’s geopolitical goal was now to tap into wealth in the east, and technological advancement in the west, as stated by Chinese scholar Zhang Wenmu.

China’s ascendancy to great power status in the twenty-first century was primarily enabled by a combination of geographic, political, and economic factors. It’s economic growth allowed in this century an unprecedented concentration on naval development. The People’s Liberation Army Navy has grown substantially over the previous two decades, enabling the overseas projection of Chinese military power.

As it has done throughout history, China is embarking on an expansionary course more out of necessity than out of ambition. The Belt and Road Initiative (BRI), for instance, aims to ease the country’s economic and logistical dependence on its eastern coast while developing its less-developed interior regions.

Similarly, Beijing’s increasingly assertive maritime policy is another attempt to secure its access to overseas markets and preclude a challenger from presenting a threat to its multiplying global interests. There are consequences, however, for China’s increasingly aggressive expansionism.

China will attempt to outmaneuver these consequences wherever possible, as it strives to revise the terms of the international order. Chinese expansionism is a policy that will yield unpredictable results after centuries of a Sinocentrist approach to international relations. However, if the U.S. and its allies fail to provide and sustain a viable alternative to counter China’s hegemonic ambitions, Beijing will find it increasingly easier to rewrite the rules of global trade and security.