Russia is Planning to Remain in Syria for the Long-Term 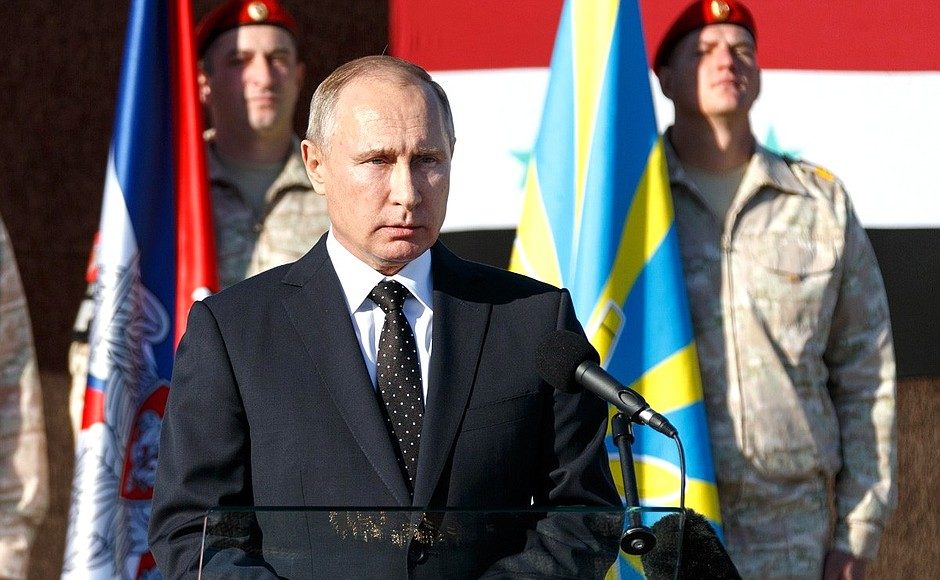 Russia’s decision to withdraw from Syria isn’t about how to leave, but how to stay

Standing on the Russian military airbase at Khmeimim on his December visit to Syria, Vladimir Putin announced that Russia will withdraw the bulk of its forces from Syria following the “successful intervention” in Syria’s armed conflict.

This is Putin’s second withdrawal announcement within two years. And just like the first, in March 2016, this one is unlikely to lead to a genuine military pull-out.

First of all, it was a public warning to Assad that Russia was not going to reconquer all of Syria for him, a nudge that Moscow had entered the war to help Assad’s troops get back on the offensive and reconquer territory themselves. As far as Putin’s domestic audience went, the mooted “withdrawal” reframed Russia’s military intervention as a victory. But it also reminded Assad just how much he depends on the Kremlin’s help – a reliance that endures to this day, virtually guaranteeing Russia a seat at the table for any international negotiations over Syria’s future.

No surprise then that, on a secret visit to Sochi in November 2017, Assad expressed his gratitude “on behalf of the Syrian people to you, Mr President, for our joint success in defending Syria’s territorial integrity and independence” and “to those institutions of the Russian state that provided assistance – primarily, the Russian Defence Ministry that has supported us throughout this operation”.

Without Russian air support, Assad’s forces could not have secured the “recapture” of Aleppo in December 2016 or declared victory over the so-called Islamic State in early November 2017. Assad knows that he owes his survival to the Kremlin.

Russia is taking the diplomatic lead

Russia’s diplomatic heft made a decisive difference too. Whereas the International Syria Support Group‘s UN-brokered peace talks stalled, Russia organized talks to negotiate a ceasefire in Syria together with Iran and Turkey. The trilateral talks were convened in Moscow in December 2016, paving the way for talks in Astana, Kazakhstan in early 2017 and the creation of “de-escalation zones” in the summer of 2017.

With the Astana process, Turkey, Iran, and Russia have effectively sidelined the Geneva peace talks on the future of Syria and, by the same token, the major Western powers. Western initiatives on the future of Syria are conspicuously absent. A joint Trump-Putin statement on Syria of November 11, 2017, only reiterates the unsurprising talking point that there can be no military solution to the Syrian conflict.

The Astana group met again in Sochi in November to discuss a post-conflict political settlement for Syria. It was also in Sochi that Putin announced that Russia’s military operation in Syria would near its end. Russia remains the unofficial leader of this trilateral format – and Putin’s second withdrawal announcement, just like the first one in March 2016, is a sign of political leverage in Syria’s post-conflict scenario planning.

At the same time, the pull-out order also has domestic priorities in mind.

Vladimir Putin: Playing to the crowd

With Putin recently confirming he will run for re-election in March 2018, the Kremlin is sending a soothing public signal to give the impression that the Syrian venture was a temporary and surgical operation, terminated in an orderly manner. But based on other information that is emerging, an impression is all it is.

A recent AP report suggests that Russian private contractors have fought alongside the regular army accountable to the Ministry of Defence. The practice of using mercenaries in conflict situation has been common practice on the part of the US government in both Iraq and Afghanistan. But it is also reminiscent of the Russian “volunteer” soldiers supposedly “on vacation” who fought alongside pro-Russian separatists in eastern Ukraine.

These methods help to keep the “official” death toll low in both Ukraine and Syria, easing the pressure of Russian public opinion while ensuring that Russia’s presence in Syria will outlast the regular army’s exit.

Securing oil and gas fields recaptured from Islamic State militias could be their longer-term purpose. And in addition, Putin stated that Moscow will continue to operate the Khmeimim airbase as well as its naval base in Tartus, making it fairly easy to reactivate Russian aircraft depending on military and political circumstances.

So on the face of it, the Kremlin conveys a message of managed retreat by declaring “mission accomplished” as Putin has ordered a military pull-out of Russian troops from Syria. But Russia’s post-conflict position in the country is bolstered politically and militarily more than ever. Whatever the future of Syria will look like, Russia is there to stay.

Lecturer in International Relations at University of Salford
Thanks for signing up! Please check your inbox for an email confirming your subscription.
Via The Conversation
IranRussiaSyriaUnited States
Share
You might also like
Energy