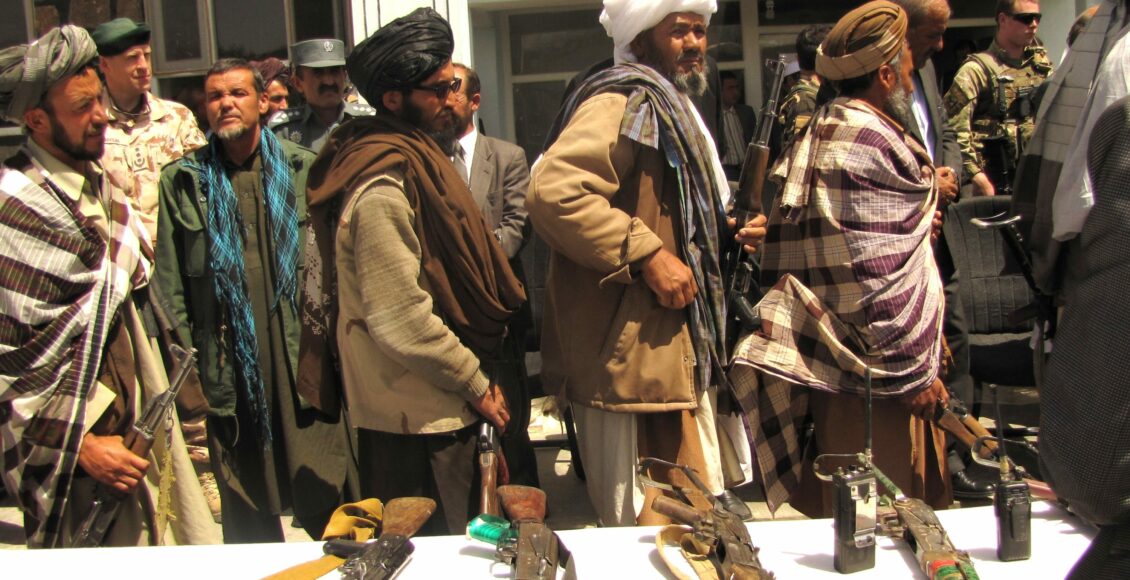 Former Taliban fighters handover their rifles to the Afghan government in 2012.
Share

The same week NASA announced the successful landing of its probe InSight on Mars, violence erupted in Kabul, Afghanistan. A rogue militia commander’s arrest by government security forces triggered violent protests by his supporters, leaving at least 30 civilians and security personnel wounded, and brought parts of the city to a standstill.

Commander Alipour—known as “Commander Sword” by his supporters because of his exploits in fighting the Taliban in Afghanistan’s inland provinces—was detained because of accusations of human rights abuse. His arrest follows the detention of a powerful police chief in the North, Nizamuddin Qaisari, who was arrested by the orders of President Ashraf Ghani as part of a crackdown on unruly officers behaving like rogue militia leaders. That incident also led to violent protests.

What is worth noting in both these incidents is the overly explicit ethnic fervor shown by the supporters of both the men who were objecting their arrests. The supporters of Alipour and Qaisari were predominantly from Hazara and Uzbek ethnic groups, to which Alipour and Qaisari respectively belong. The intensity of the protests forced the government to walk back Alipour’s arrest. In Qaisari’s case, indictment proceedings of current vice president and Uzbek strongman Rashid Dostum on charges of sexual abuse had to be overlooked to let him return to the country from a self-imposed exile in Turkey to pacify pro-Qaisari protests. The unrest had, by then, paralyzed daily life in many northern provinces.

Another individual with a similar reputation as a rogue official, Kandahar’s police chief Abdul Raziq, was left unscathed until he was assassinated by the Taliban in November 2018. Raziq—now hailed as a national hero after his assassination—was no martyr. Although Raziq was spared from the crackdown largely because of his role in ensuring Kandahar’s security against the Taliban—and tacit support from the United States—his being spared from arrest highlights discrepancies in the treatment of individuals of different ethnic groups.

Raziq, unlike Alipour and Qaisari, was Pashtun, as is President Ashraf Ghani and the majority of his aides and advisors. Although the men are members of different Pashtun tribal confederations—Raziq was Durani while President Ghani is Ghilzai—the incident accentuates the privilege Raziq enjoyed due to his belonging to the same ethnic group as the president.

The peace talks with the Taliban have reached a critical juncture.

Zalmai Khalilzad, the veteran Afghan-American diplomat and former U.S. ambassador to Afghanistan, has returned as U.S. President Donald Trump’s envoy to hasten along the negotiation process. During this critical phase, attention must be paid to the ethnically-charged uproar engulfing Kabul following Alipour’s arrest. This is especially important due to the ambiguity of the situation.

The content of the peace talks remains a matter of debate even between the U.S. envoy and his Afghan hosts in the National Unity Government. The opacity of the negotiations could create anxiety among sections of Afghan society that are wary of giving the Taliban too generous of a deal. The content and nature of any future negotiations remains unknown, both to those involved and to outside observers, according to the head of Washington-based American Academy of Diplomacy and former U.S. ambassador to Afghanistan Ronald Neumann in a recent discussion he attended at the Afghanistan Institute of Strategic Studies.

Bellicose and opportunistic individuals among non-Pashtuns, similar to Alipour and Qaisari, might proliferate and see a boost to their popularity if a peace deal with the Taliban and their return to political dominance in any form put their ethnic groups in potential or actual harm.

What is more at stake—apart from safeguarding the delicate ethnic balance—is sustaining the advancements made by women, the civil society, and Afghanistan’s youth in post-Bonn Agreement Afghanistan. In the words of activist and former government official Shaharzad Akbar, what should be achieved through a deal is “an expansion of opportunities, not their curtailment.” Akbar added “if today a girl in Faryab cannot go to school, if in Helmand a girl is unable to study in a university, we want them to have this opportunity. Not a girl who is already going to school in Bamyan to be deprived of this right.”

In a recent survey of over two thousand individuals from Afghanistan’s 34 provinces, 90 percent of the respondents indicated that they disagreed with the Taliban’s style of governance. To many who oppose the group’s politics and ideology, the Taliban’s blend of Islamic fundamentalism and tribal hierarchy might be palatable if they form a political party similar in nature to the parties formed by other militant groups from the Soviet resistance era. However, giving over too many concessions may lead to unforeseeable backlash, including by ordinary Afghans.

Over-concession would threaten the advancements in Afghan society made possible by an international commitment to Afghanistan’s reconstruction that has endured for over seventeen years. The Taliban’s return through an overly-generous power-sharing arrangement made possible by a hasty deal by U.S. envoy Khalilzad—allowing for the U.S. military withdrawal the U.S. president is impatient to achieve—will likely aggravate segments of society that view the group as a tribal outfit and political misfit.

Both the Taliban’s deeds and words do little to reinforce their claims of politico-ideological reform and a move away from the dogmatism demonstrated during the late 1990s. The Taliban’s online rhetoric grows harsher the more it nears what the group perceives as a military victory against the U.S. and Afghan security forces. This perception is reinforced by the constant unidirectional plea for peace from the U.S. and the Afghan governments that emboldens the group. The Taliban swiftly condemns anyone who contradicts their official pronouncements. Early in November, at a conference in Moscow to which the Taliban sent a delegation, the group issued statements demanding respect for the “Islamic Emirate of Afghanistan.” Such rhetoric should be taken into account when considering whether the Taliban has genuinely reformed.

Any peace deal should include strong guarantees to prevent the Taliban—who’ve shown a penchant for totalitarian rule—from gaining too much power. This is vital for preserving social dialogue on important issues such as women’s rights, freedom of expression, and civic equality—among all ethnic groups in Afghanistan.

A recent statement by the Afghan National Unity Government (NUG) gives some reassurance as to such guarantees through an Afghan-owned and Afghan-led negotiation process. The statement reiterates respect to the Afghan Constitution as a fundamental starting point. However, U.S. envoy Khalilzad has so far ostensibly circumvented the government in Kabul by directly engaging in talks with the Taliban’s political office in Doha.

More importantly, there is suspicion regarding Khalilzad himself who is not known for being impartial in his past dealings and has previously expressed favorable views about the Taliban. Members of the main anti-Taliban group, the Northern Alliance, might be reluctant to cooperate with him because Khalilzad has made efforts to politically sideline the group in the past—about which he elaborates effusively in his book, The Envoy. At present, sitting with Khalilzad would be akin to a “fool me twice” scenario for most of these actors.

The U.S. strategy should be depersonalized—with an impartial diplomat essential for doing so. Khalilzad himself could be seen as ethnically biased as he belongs to the Pashtun ethnic group. Any deal struck by Khalilzad, even if it is of sound basis, will be treated with suspicion by other Afghan ethnic groups. Further, nothing endangers the credibility of a peace deal more than a prevailing doubt concerning the intentions behind it. Replacing Khalilzad as U.S. envoy would go a long way in inviting confidence that the interests of all ethnic groups will be taken into consideration.

Projecting respect for equality is paramount to ensure the implementation of a sustainable agreement that won’t result in a civil war in the future. If any one ethnic group is perceived as receiving special treatment, feelings of insecurity will increase among the other groups. Historically—in Afghanistan and throughout the world—such insecurity has led to armed resistance and violence. Should history repeat itself in this way, the current stalemate with the Taliban may be seen in a nostalgic light.

Kambaiz Rafi is a PhD candidate in political economy at University College London (UCL). He currently works at the Afghan Ministry of Economy as an advisor to the Minister of Economy. The views and opinions expressed are solely those of the author. Kambaiz is on Twitter @KambaizR