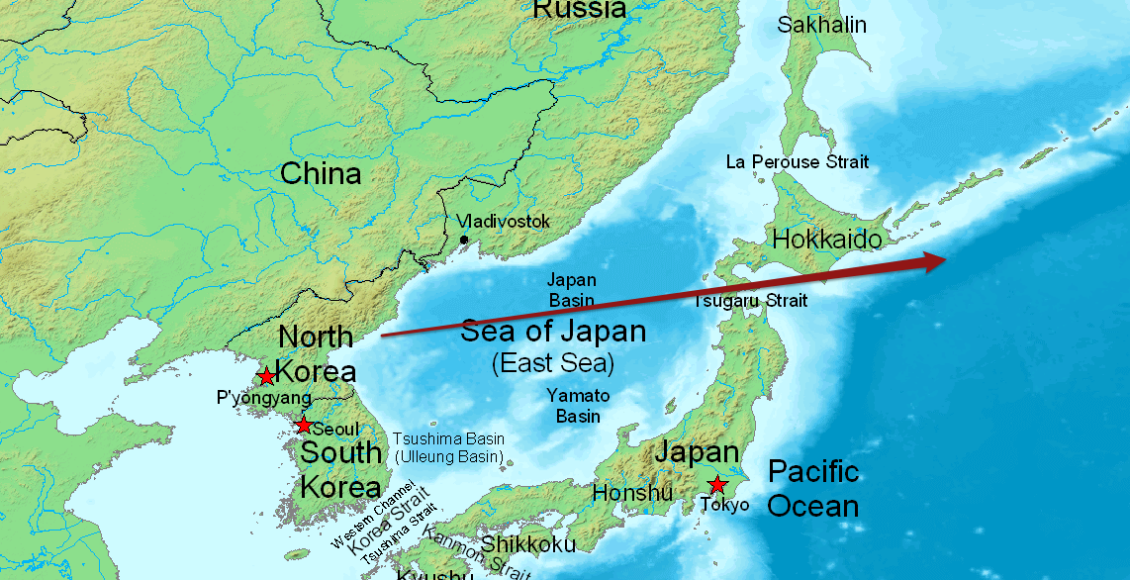 North Korea has fired a ballistic missile that flew over Japan before plunging into the northern Pacific Ocean, termed a “grave threat” by the Japanese prime minister. The South Korean military stated that the missile was launched just before 6 am local time on Tuesday from the Sunan region of North Korea, near the capital of Pyongyang.  The missile traveled about 2,700 kilometers (1,1677 miles), reaching a max height of 550km, according to a statement issued by South Korea’s Joint Chiefs of Staff.
[geo_mashup_map]
Experts believe that North Korea used the recently tested Hwasong-12 intermediate-range ballistic missile, the same variant that North Korea has threatened to fire towards the US territory of Guam. Japanese public broadcaster NHK reported that the missile flew across the northern Japanese island of Hokkaido and broke into three pieces before landing in in waters 1,180 kilometers (approximately 733 miles) off the coast of Hokkaido’s Cape Erimo.

A Threat to Regional Stability and Security

The Japanese government’s J Alert warning system advised individuals In northern Japan to take precautions.  NHK reports that there have been no instances of property damage as the missile fell in the waters over 700 miles from the Hokkaido coast. In a public statement shortly after the launch was reported, the visibly agitated Japanese prime minister Shinzo Abe said the act an unprecedented, severe, and grave threat to the security of Japan, and to overall regional stability.

In a 40-minute phone call between Abe and US President Donald Trump, the two leaders agreed to increase pressure on North Korea further.  Although there have been several recent missile launches by North Korea, a missile passing through the Japanese mainland will be seen as a larger provocation. This will be looked at by Japan, the United States, and South Korea as underscoring the seriousness of the threat posed by North Korea, Abe said.

Before the launch, tensions have been running higher than usual following an escalation in rhetoric from Mr. Trump towards North Korea, and North Korea’s statements that it was prepared to firing several missiles towards targets surrounding the US island territory of Guam.

What makes this recent development significant is that this is the first major North Korean test of Donald Trump’s rhetoric following the speech in which he threatened North Korea with “fire and fury.”  Of most concern is the Trump administration’s response,  as its’ foreign and defense policies are unpredictable, in comparison to previous administrations.  Four South Korean jets bombed a South Korean military training ground on Tuesday in a show of forceful readiness.