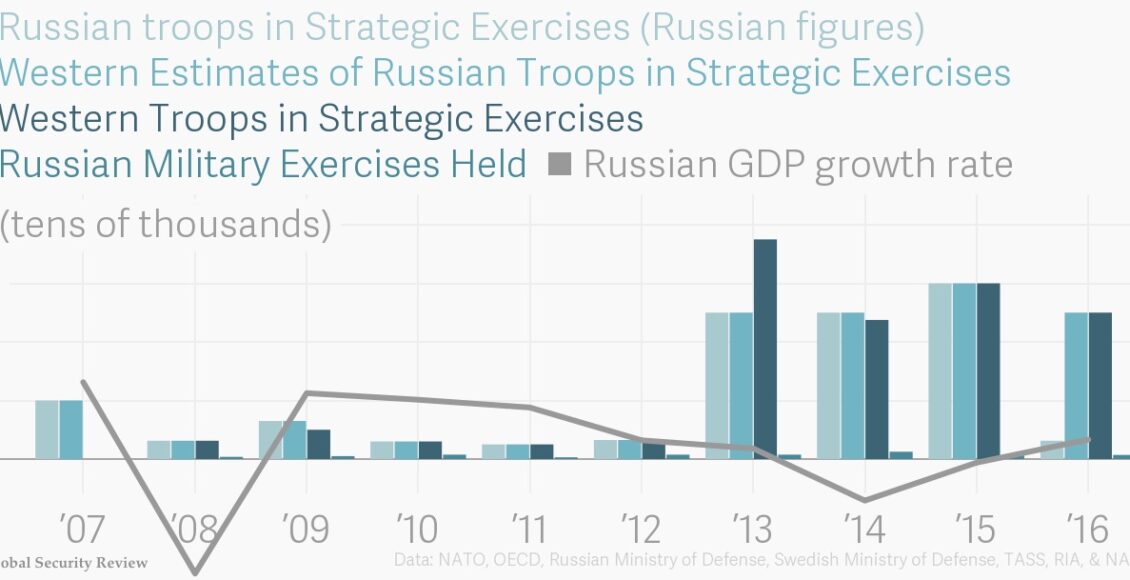 The Kremlin must be sure of Russia’s ability to prevail in any forceful confrontation, or at least ensure a stalemate.

While eastern European leaders are certainly justified in their concern, it is the job of military leaders all over the world to ensure that their forces are prepared to deal with worst-case scenarios. Zapad and other large-scale war games are intended to test the readiness of military forces to deal with such situations.

History, and Russia’s military doctrine, tells us that for the Kremlin to legitimately consider the use of force against a sovereign state—under the guise of aiding Russian-speaking separatists, military drills, or otherwise, the Russian military and political leadership must perceive a legitimate threat to Russia’s national interest—largely the interests of its ruling oligarchic elite.

Additionally, the Kremlin must be sure of its ability to prevail in any forceful confrontation or to, a minimum, ensure a stalemate. Neither condition seems present.

Since last year’s strategic Caucasus-2016 exercise, no Russian allies or client states are under greater threat than they were last year. A few, like Bashar al Assad of Syria, have seen threats to their rule decrease in the past year.

How Likely is it that Russia Will Attempt a Crimea-Style Operation Against the Baltics?

NATO is now keeping a much closer eye on the Russian military techniques, particularly since the  Zapad-2013 exercises featured simulations of a pre-emptive nuclear strike against Sweden.

Western countries were caught unaware as Russia employed hybrid tactics to hide its deployment of forces to Crimea.

NATO has beefed up its presence in its Baltic and Eastern-European Union member countries, further reducing the already slim chances that Russia will want to attempt an incursion in Baltic or E.U. states.

NATO is now keeping a much closer eye on the Russian military techniques, particularly since the  Zapad-2013 exercises featured simulations of a pre-emptive nuclear strike against Sweden.

Preparing for a conflict doesn’t mean the Kremlin is planning to commence one.

The Russian military has been holding large scale strategic exercises each year of the twenty-first century, as the Russian economics has rebounded from the lows of the early 1990s. Preparing for such a conflict doesn’t mean the Kremlin is planning to commence one.

It is also worth noting a correlation between Russia’s economic state and its military spending and training. This would imply that the Russian Armed Forces have a tendency to train as far because they can afford to.

Until 2015, Russia’s military expenditures and the number of war games it conducted, both large- and small-scale, had been increasing at a faster rate than the rate of economic growth.

Given the degree of attention focused on Russia’s military deployments, it’s highly unlikely that that Zapad-2017 will escalate into a full-scale or partial military conflict with NATO.

Even though Russia’s Gross domestic product grew to 2014, its costs grew by 300 percent at the exact same period and the number of war games increased by 157 percent from 2008 to 2014.

It should be noted that this precludes any so-called “black money” that would not appear on a publicly available balance sheet.

Security Analysis: Although Possible; War with NATO is Unlikely.

The biggest risks stemming from the Zapad drills are possible errors, including stray shots, local attempts to test responses through other measures, moderate or temporary escalation in existing conflict zones (such as in Ukraine, Abkhazia, or South Ossetia).

Additionally, due to regional geopolitical developments in the Russia-Belarus relationship, Russia may attempt to use “nonlinear” warfare tactics (asymmetric tactics) in order to further consolidate the Russia-Belarus “Union State.”