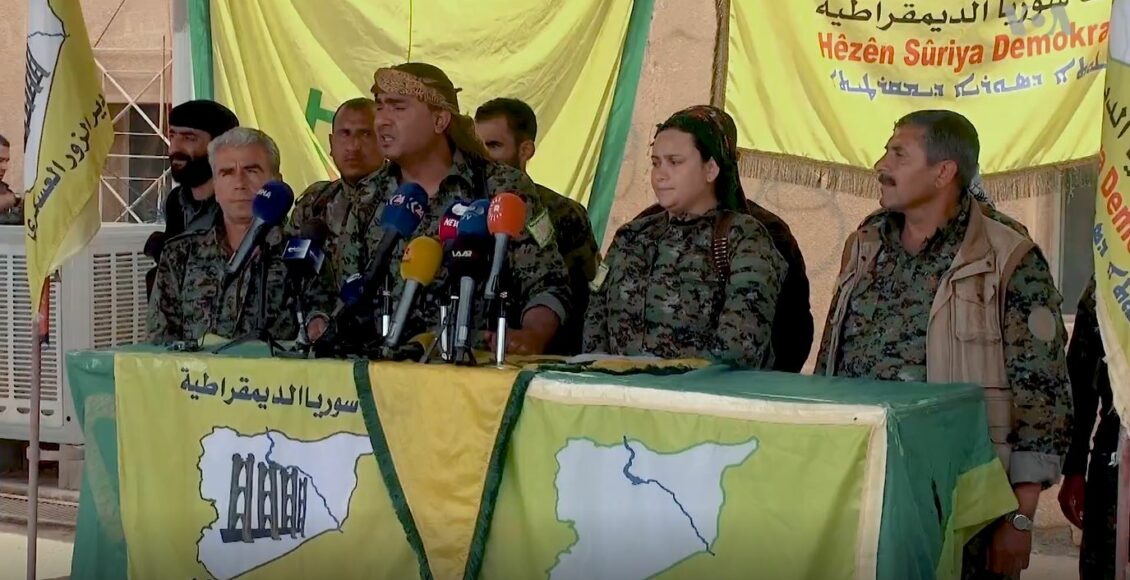 Members of the Syrian Democratic Forces in Deir ez-Zor in May 2018.
Share

The oil-rich province of Deir ez-Zor, located in Eastern Syria, has witnessed another escalation between the local Arab populace and the Kurdish-dominated Syrian Democratic Forces (SDF). Unexpectedly for the SDF and the U.S. military, the protesters have established control over several towns, and it seems they are willing to go further.

Sources close to the SDF initially reported that the protesters limited their demands by requesting a solution to many minor issues. Still, soon enough, it became evident that it was not the case and the problem—and a major one—was the presence of SDF in the area. The demonstrators were quick to turn from chanting slogans to taking control of towns: in a single day, they captured all of Shuhayl, Al-Hawayej, Diban and forced the SDF members to leave before blocking the roads.

The protests were sparked by a series of assassinations of influential leaders of the Al-Aqidat and Al-Baqara tribes. Three Deir ez-Zor sheikhs were killed in less than a week: Sheikh Suleiman Khalaf al-Kassar from Al-Aqidat was shot in Busayra village on July 30th. The next day Sheikh Suleiman Al-Weis who belonged to Al-Baqara, was shot in the head by two gunmen on a motorcycle in Al-Dahla. Finally, Sheikh Muttshar al-Hamoud al-Hifl was shot in the outskirts of Al-Hawayej on Sunday, August 2. His relative, Sheikh Ibrahim al-Hifl, was also wounded in the incident but survived.

In a peculiar coincidence, a few weeks before the assassinations, the tribal leaders were invited to a meeting with the SDF Commander Mazloum Abdi with the U.S. servicemen also present. The agenda reportedly included co-operation between the tribes and the SDF. It was reported that at least one of the victims, Muttshar al-Hifti, declined to participate and to engage with the Americans.

An insight into the details of these meetings can be gained through the reports about an oil deal allegedly struck by the SDF and a little-known American oil developer Delta Crescent LLC. Delta Crescent was granted exclusive rights for production, refinement, and export of the oil from Deir ez-Zor fields, potentially bringing the participants an annual profit of hundreds of millions of dollars, according to statements made by U.S. officials. The deal was met with a harsh response from the Syrian government, which labeled it a “deal between thieves.”

According to sources on the ground, the implication is that those who fell victim to the assassinations shared this view and opposed the deal. Their removal, however, has clearly failed to deliver the results intended by the masterminds behind their deaths, yet another time when the Kurds were thrown to the wolves by the U.S. who is accustomed to making their allies bear the consequences of the reckless pursuit of the American interests.

Meanwhile, the SDF started to amass forces in the vicinity of the areas shaken by the unrest. The reinforcements sent from Al-Shadadi, Al-Sousa, and Baghuz are gathering at the U.S. military base near the Al-Omar oil field. Moreover, two U.S. Apache attack helicopters were spotted patrolling the area. These developments, combined with a lack of report on any negotiations between the protesters and the SDF leadership, paint a grim picture, indicating that the SDF likely intends to use force to disperse the protests.

It is not the first time the SDF resorts to the use of force when faced with the discontent of the local populace in north-eastern Syria, although this approach had never brought the desired result. All areas affected by the protests have been subjected to dozens of raids by the SDF and U.S. special forces. Reports on these operations unfailingly mentioned arrests of ISIS terrorists. They failed to mention, however, what the Pentagon files under the category of “collateral damage”—the deaths of civilians killed as a result of the actions of the U.S. military and its allies.

The upheaval in Deir ez-Zor is yet another evidence that the SDF, initially an independent movement, has degraded to a tool or a lever of American influence in Syria, and now finds itself fighting consequences instead of locating the root cause of the unrest – widespread corruption among the officials of the Kurdish administration and dramatic deterioration of the living conditions.

The regional turbulence created by Washington’s constantly shifting stance—or rather a lack of stance—on Syria has grown so strong it finally turned against the American interests. The latest escalation in Deir ez-Zor should be considered nothing but a byproduct of this ill-designed policy and, perhaps, marks the beginning of the end of the US and SDF hegemony in Syria’s North East.

Ahmad al Khaled is a Syrian journalist who covers the Syrian conflict and Middle East politics in general. His articles have been published by the Jerusalem Post, Youm 7, and other leading regional outlets.