The U.S. and Vietnam Are Expanding Areas of Military Cooperation 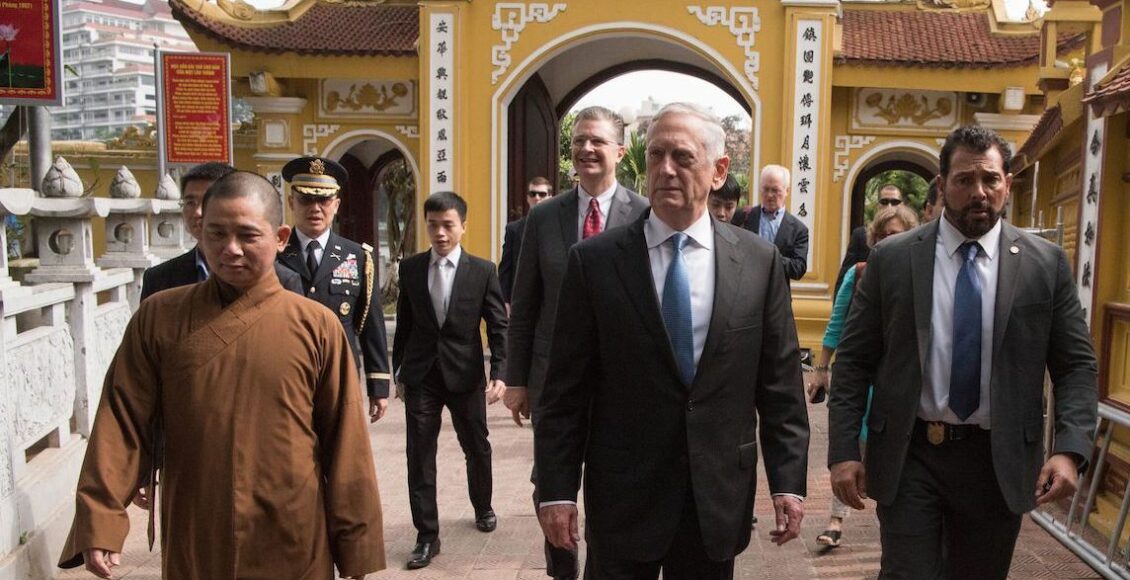 As the U.S. shifts its national security priorities to confront a rising China and an assertive Russia, military cooperation with countries like Vietnam will be critical to deterring aggressive behavior.

U.S. Secretary of Defense James Mattis praised the expanding partnership between the United States and Vietnam, and lauded the upcoming visit of a U.S. aircraft carrier to Vietnam, during a visit to Hanoi on January 25, 2018.

“We thank you for the increasing partnership, with our carrier coming into Danang here in March,” Mattis told Nguyen Phu Trong, the General-Secretary of the Vietnamese Communist Party.

The visit of a U.S. aircraft carrier will be the first of its kind to a Vietnamese port and signals a growing defense partnership between the two countries. “It’s not final, but it all looked very encouraging,” Mattis told reporters. Pentagon officials have repeatedly stated that Vietnam’s prime minister—the official head of state—has the final sign-off on any visit to Vietnam by a U.S. aircraft carrier.

Secretary Mattis met with Vietnamese Defense Minister Ngo Xuan Lich during his visit to Hanoi.  The two leaders discussed plans to increase the degree military cooperation between their respective countries and agreed to expand defense cooperation between the U.S. and Vietnam over a three-year period. Areas of cooperation include maritime security, humanitarian assistance, disaster relief, and peacekeeping operations.

The U.S. has been increasingly committed to improving relations with Vietnam, notably as Hanoi has emerged as willing to resist China’s expansionist policies in the disputed regions of the South China Sea. Mattis said he believes “it’s in America’s best interest to see a strong and prosperous and independent Vietnam, and we intend to be a partner as we go forward.”

Mattis repeatedly emphasized areas of agreement and cooperation. “We are like-minded partners,” Mattis told Communist Party General-Secretary Nguyen. “So we do not have to search hard for areas of common agreement.”

Vietnam maintains a policy of not engaging in formal military alliances. Therefore, U.S. officials are cautious about the pace of improving relations. However, Mattis stated that ties between the U.S. and Vietnam are “close now, and getting closer.”

President Barack Obama lifted a decades-old embargo on U.S. weapons sales to Vietnam in 2016. The U.S. currently has 24 active foreign military sales with Vietnam, valued around $70 million, according to U.S. officials. The U.S. recently transferred a Hamilton-class cutter to Vietnam’s Coast Guard—the largest ship in the country’s coast guard or navy. This was the first U.S. transfer of lethal military equipment to Vietnam.

An expanded relationship with Southeast Asian allies seems to play a significant role in the Pentagon’s new defense strategy, which is attempting to pivot U.S. attention from counterterrorism to managing a geopolitical rivalry with China and Russia.

Support for freedom of navigation and the rule of law in the South China Sea are essential components of U.S. values and foreign policy, according to Mattis. Beijing claims nearly the entirety of the South China Sea, ignoring the territorial claims of Vietnam, the Philippines, Malaysia, and many of its other, smaller neighbors.

Vietnam’s increasing capability to stand up to China, supported by the U.S., could potentially serve as an effective deterrence to China’s increasingly aggressive expansionist activity in the South China Sea.