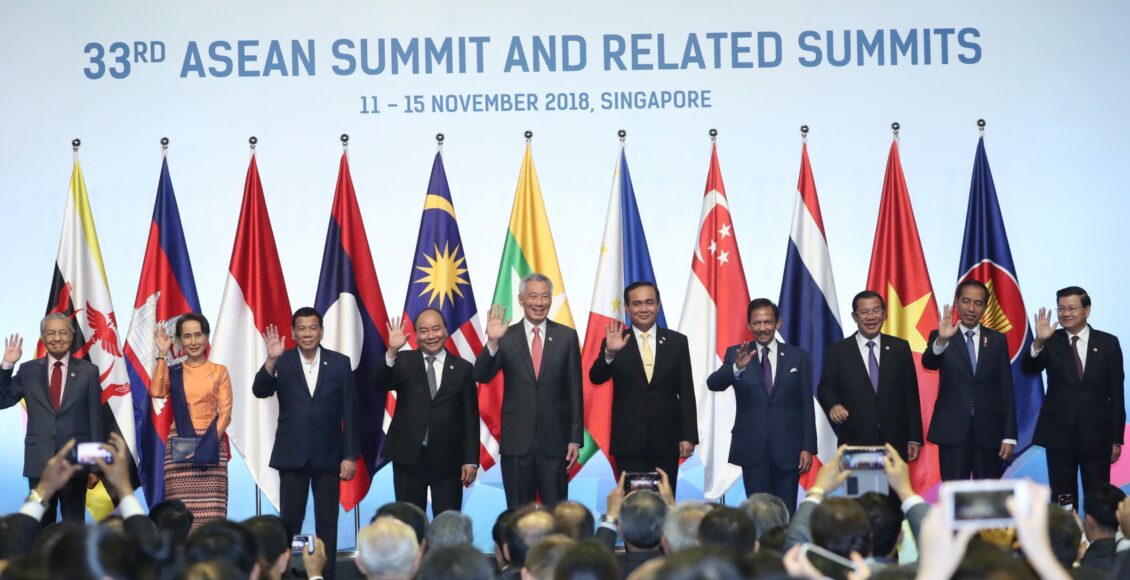 Member heads of state and government at the 2018 ASEAN Summit (Photo: ASEAN)
Share

The time has come to demonstrate again that the United States seeks to engage partners in Southeast Asia at the highest levels of government.

As the region’s economic and security landscape continues to evolve, and as Chinese interests in the region grow, the United States government must increase its engagement with the Association of Southeast Asian Nations (ASEAN) through two avenues: first, by confirming an ambassador to ASEAN, and second, by sending President Trump as the head of the U.S. delegation to the 2019 East Asia Summit (EAS). These two actions would send a powerful message about American interest in promoting economic partnership, balancing against Chinese influence, and promoting a rules-based order in Southeast Asia.

The East Asia Summit represents one of the most important diplomatic events in the region. Featuring heads of state and government from ASEAN members and invited guests, the EAS provides a forum for high-level engagement in a key strategic part of the world for American security and trade interests. In recognition of this reality, President Obama attended the event on five separate occasions after the United States first received an invitation to the summit in 2011. In the past two years, however, former Secretary of State Rex Tillerson and Vice President Mike Pence have attended the summit instead of the president. Leading the American delegation to this year’s EAS would allow President Trump to show partners in ASEAN that America remains committed to dialogue and collaboration in the region, even as China increasingly asserts its own interests there.

The president’s attendance at the East Asian Summit would provide the United States with a high-profile opportunity to demonstrate resolve in Southeast Asia. Additionally, filling the vacant position of U.S. Ambassador to ASEAN would expand the number of channels for more sustained engagement. At this pivotal point for the region, the U.S. government must deepen its dialogue with regional partners even as the president attends this year’s summit to convey America’s high-level interest in Southeast Asia. China has recognized the importance of sending an ambassador to ASEAN, maintaining this representation without interruption since 2008. Given last year’s adoption of the ASEAN-China Strategic Partnership Vision 2030, this role will only grow in importance.

These steps forward in American engagement with ASEAN member states are increasingly necessary.

According to the China Global Investment Tracker, a collaboration between the American Enterprise Institute (AEI) and the Heritage Foundation, Chinese overseas investment in ASEAN member states has exceeded $55 billion since 2017. In Vietnam, for example, Chinese foreign investment has totaled almost $4 billion since the beginning of 2017. Meanwhile, in Indonesia, the host country of the U.S. Mission to ASEAN, Chinese investment reached nearly $9 billion in the same time period.

As February’s controversy surrounding the role of Chinese firm Huawei Technologies in the Thai government’s 5G infrastructure initiative demonstrates, however, increased economic integration between China and ASEAN member states can come at a significant cost. In this environment, the United States must utilize diplomatic means to underscore continued economic engagement in Southeast Asia.

Furthermore, these actions would send a message to the region: the United States seeks deeper diplomatic, economic, and strategic engagement with the nations of Southeast Asia, both on a more consistent basis and at the highest possible levels. Following last year’s passage of the Asia Reassurance Initiative Act (ARIA), confirming a nominee for the position of U.S. Ambassador to ASEAN would also signal continued support for heightened American involvement in the region by both the U.S. Congress and the executive branch. As China seeks to extend its influence among ASEAN member states through the simultaneous uses of inducement and intimidation, protecting U.S. interests in the region needs a whole-of-government response.

ASEAN presents the United States with more opportunities than challenges.

China has recognized the strategic importance of the region and taken action to engage economically and diplomatically. The combined gross domestic product of ASEAN member states exceeds $2.5 trillion. Defense spending among littoral states surrounding the South China Sea will likely reach $250 billion annually by 2020. The president should travel to the East Asia Summit this year in pursuit of those opportunities for partnership, and he should nominate someone to serve as U.S. Ambassador to ASEAN to do the same.

In the past, the United States led the way in engaging with ASEAN. The government sent an ambassador to the organization’s headquarters and established a diplomatic mission there before any other non-member state. President Obama represented the United States at the East Asia Summit five times in six years; President Xi Jinping has yet to attend the gathering, and President Vladimir Putin attended for the first time last year. Confirming a qualified individual for the vacant ambassadorship and sending the president to this year’s summit would signify American leadership in engaging with ASEAN once again.

Chris Estep is a researcher at the Center for a New American Security (CNAS) and a master’s candidate at The George Washington University’s Elliott School of International Affairs.