They detail a Kremlin plot to ramp up engagement in Ukraine through subversive measures. 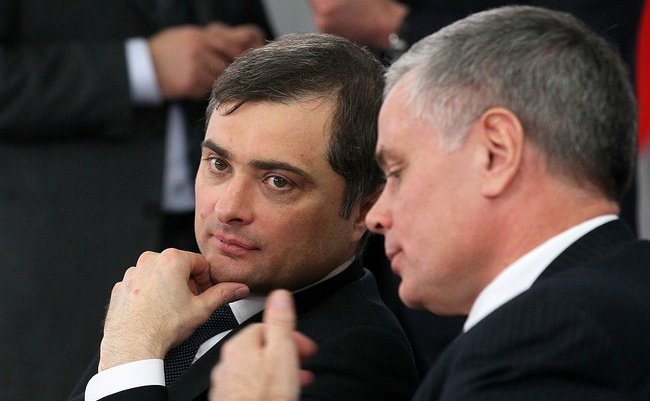 Hacked emails, allegedly belonging to top Putin advisor Vladislav Surkov, reveal a Kremlin plot to create conditions for the annexation of parts of eastern Ukraine that coincides with the aftermath of the 2016 U.S. Election.

In the early autumn of 2016, a Ukrainian hacker collective calling itself CyberJunta obtained and subsequently published emails reportedly belonging to Vladislav Surkov, a senior advisor and personal aide to Russian President Vladimir Putin.

CyberJunta stated that its efforts were undertaken in conjunction with other hacker collectives; specifically, groups referred to as “FalconsFlame,” “RUH8,” and “Trinity.” This grouping refers to itself the Cyber Alliance. Oft-referred to as the” Gray Cardinal of the Kremlin,” Surkov is considered the be the architect of Russia’s contemporary political system.

Who is Vladislav Surkov?

From 1999 to 2011, while serving as the First Deputy Chief of the Russian Presidential Administration, Surkov acted as the Kremlin’s main ideologist; proposing and subsequently implementing the concept of “sovereign democracy” in Russia. Surkov is perceived by many—both in Russia and in the West—as a key figure with considerable influence in the Kremlin. According to The Moscow Times, this power is independent of any official title Surkov has held within the Putin administration or in the Russian government.

Observers have credited Surkov’s keen ability to manipulate public perception through an intricate blend of theater and managed politics with keeping Putin in power since 2000. As First Deputy Head of the Presidential Administration, Surkov sat a desk laden with phones labeled with the names of nearly all of Russia’s “independent” or “opposition” political party leaders, “calling them and directing them at any moment, day or night.”

The Puppet Master of Moscow

Rather than directly oppressing opposition as traditional authoritarian governments had done, Surkov’s strategy was more complex. Under Surkov’s direction, dominant ideologies and movements were infiltrated with propaganda and misinformation, sewing chaos by exploiting their internal disagreements, rendering them ineffective.

This strategy is exemplified by Surkov funding civic forums and foreign non-governmental organizations while simultaneously providing support and encouragement to Russian nationalists who would accuse NGOs of being “tools of the west.” By placing itself at the center of all forms of political and ideological discourse, the Kremlin effectively owns any narrative an independent movement might try to seize.

In December of 2011, Surkov was appointed Deputy Prime Minister. In May of 2013, Surkov forced to resign his position within the government, returned to the Presidential Administration to serve as a personal adviser to Vladimir Putin on Abkhazia, South Ossetia, Crimea, and Ukraine. Surkov has since been placed on U.S. and E.U. sanctions lists for his role in orchestrating the Crimean annexation.

The Kremlin Plot to Normalize Ukraine

The hacked emails detailed a Kremlin plan to further destabilize Ukraine in an effort favor Russia’s interests, by pushing for early Parliamentary elections through the extensive use of cyber and information warfare tactics, and through increased financial support to separatist or “pro-Russia” politicians.  Also published by hackers were copies of passports that are alleged to belong to Surkov and members of his family, which have been verified as authentic.

The plan detailed in Surkov’s purported emails states that de-escalating the conflict in eastern Ukraine on Russian terms is possible—if the Kremlin can fundamentally shift the Ukrainian political landscape in its favor. De-escalation and normalization would then create favorable circumstances for the integration of the Donbass with Russia—Russian-armed separatist militias, and “little green men”—widely known to be Russian troops in unmarked uniforms continue to wage war against the Ukrainian armed forces in the Donbass and Donetsk regions of eastern Ukraine.

The campaign detailed in the alleged Surkov emails would increase non-kinetic tactics—i.e. active measures (subversion, kompromat, propaganda, economic influence)—that would bolster support for Russian interests in Kiev. If more pro-Russia or “separatist” politicians were elected to the Ukrainian parliament,  Russia’s influence would undoubtedly increase exponentially, allowing it to “de-escalate” the conflict on its terms.

Oleksandr Tkachuk, the chief of staff to the Head of the Security Service of Ukraine (the SBU), said on Television Tuesday that after a thorough examination by experts, Ukraine’s intelligence services believe the emails to be authentic.  At the time, Tkachuk reiterated that the SBU only has access to documents that were released to the public and does not have any connections with CyberJunta or related hacker groups.

The Ukrainian presidential administration and the SBU declined requests for comment from domestic and international media regarding the alleged hack. Kremlin spokesman Dmitry Peskov denied Surkov’s participation in any Russian plot to further destabilize in Ukraine and insisted that the documents released by the hacking group were forgeries.

The leaked documents allege that the optimum time to proceed with the initiative was from November of 2016 through to March of 2017. Just as the United States’ presidential election was ending. In hindsight, one can note that this timetable perfectly coincided with increased dysfunction and divisions within the United States government.

This may indicate that senior Kremlin officials were anticipating a U.S. government in chaos, distracted by domestic issues and by the well-documented Russian-directed disinformation campaigns and cyber operations designed to damage the integrity of the United States’ democratic process and institutions. Surkov was—at the time—confident in the detrimental effect Russia’s interference would have on the U.S. political system, and in the U.S.’s ability to deter normalization in Ukraine that would favor Russia’s interests.