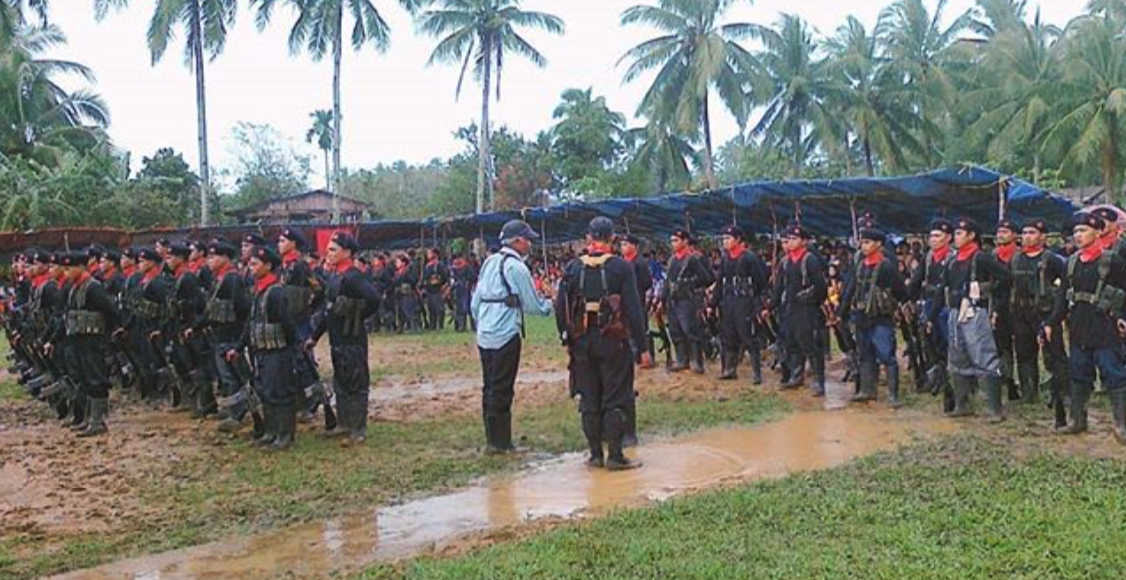 CPP-NPA and the Duterte Administration: Post-Activism, Insurgency, and Terrorism

Five decades of insurgency and terrorism in the Philippines has presented a socio-political dilemma for both the government and the general public. From the perspective of the Communist Party of the Philippines (CPP) and its armed wing, New People’s Army (NPA), the platform espoused by the Duterte administration’s tagline of “change is coming” has been not realized until now. The NPA’s actions of late reveal a presumption of justification of its violent struggle, as protracted infighting within its ranks draws increased attention from the authorities and society at-large.

The government’s over-arching strategy is to prevent communist rebels from committing atrocities and acts of violence going forward. Increased engagement on the part of the government highlights the policy guidance of President Rodrigo Duterte, amidst conflicting internal and external factors as well as joint cooperative operations (i.e., AFP-DND’s DSSP Kapayapaan 2017 and an audit request to the European Union over the alleged funding of communist NGOs).

Even after the fiftieth anniversary of Communist Party of the Philippines (CPP) on December 26, 2018, there are two compelling and competing dilemmas in Philippine political climate that may or may not come to a head until the end of this year. The first is a continued push for charter change (CHA-CHA), vis-a-vis legal reformation, and a restructuring of the political system (i.e., Federalism). The second is finding a resolution over the insurgent and terrorist activities of the Communist Party of the Philippines (CPP) and the New People’s Army (NPA) through the resumption of peace talks.

The current negotiations, to date, are the longest–running peace talks since the CPP-NPA began its armed struggle. After years of guerrilla warfare, disinformation, and a strategy which is heavily influenced by communism and radical left-leaning ideology, the NPA’s seemingly newfound use of terror tactics attempts to sway the minds of many to favor the group’s cause, as well as to drive recruitment to boost its numbers.

Between January 16 and February 1, 2017—six months after Duterte was inaugurated as president—the NPA was involved in fifteen incidents, nine of which occurred on January 30. Around the same time, talks between the NDFP and GRP (Government of the Republic of the Philippines) proceeded in Rome from January 19-25, which involved discussion of the implementation of the NDFP’s socioeconomic reform program. Though the talks were considered productive by all parties, it resulted in few concessions by either side. In particular, the GRP maintained its refusal to release 392 NDFP prisoners from custody until the issue of amnesty was fleshed out.

On January 30, 2017, the NPA broke a ceasefire with simultaneous assaults in Mati, Surigao Del Norte, Valencia City, Bukidnon, Pag-asa, Lebe, Sarangani, Union, Compostella Valley, San Isidro, Mahayahay, Hinambangan, Kitcharao, and Agusan Del Norte. Subsequently, on February 1, the NPA unilaterally called off its ceasefire, citing the failure of the GRP to release their political prisoners and generally abide by the terms of the ceasefire. In response, on February 3, Duterte withdrew the GRP from its ceasefire in response. In May 2017, President Duterte suspended peace talks with the NDFP, accusing communist rebels of attacking government forces while engaging in negotiations. Months later, on November 23, 2017, President Duterte signed Proclamation No. 360 that formally terminated the talks. Eleven days later, he issued Proclamation No. 374, declaring the CPP and the NPA to be terrorist organizations.

To counter the Duterte administration’s moves, CPP had a Second International Conference on the Indigenous Peoples in Metro Manila (July 2018). This conference intended to portray the Filipino government as having committed human rights violations. The UN High Commission and European Union acted as third-party assessors for the conference.

Despite its substantial experience with running counter-insurgency campaigns over fifty years, the Philippines remains plagued with insurgent groups. After launching numerous assaults based on purportedly effective methodologies and sound concepts, why is the government unable to defeat the CPP-NPA? Such questions that continue to linger in the minds of not only those in government but of the general public, as well.

The CPP-NPA Theater of Power

Now That Abu Bakr al-Baghdadi is Dead, What Next?

An analysis of the works of Jose Maria Sison (JOMA)—such as the Rectify Errors, Rebuild the Party! (1968), Our Urgent Tasks (between 1969 and 1975), and Specific Characteristics of our People’s War (1971)—reveals that the main difference between the new communist party founded by JOMA in 1968 to that of its precursor, the old communist party of the Lavas’ and Taruc is the former’s emphasis on the importance of a sound mass base. The works above also provide for the phasing and general direction of the revolution which calls for the adoption of stages in the development of revolution through a protracted war of encircling the cities from the countryside and by concentrating first on building a strong base and a peasant army.

Based on the said works of JOMA, the old party pushed for the immediate overthrow of the “reactionary” government by directly confronting the military. Without a stable base to launch its offensive, the former party became vulnerable to the Armed Forces of the Philippines (AFP) counter-offensive. Learning from this mistake, the new Communist Party of the Philippines (CPP) of JOMA and its armed wing, the New Peoples Army (NPA) established Guerrilla Fronts (GFs) all throughout the Philippine archipelago to spread out the AFP and dissipate it away from the seat of national government in Metro Manila purposely to provide initiative and flexibility to the Party and the Army.

The CPP-NPA document Reaffirm Our Basic Principles and Carry the Revolution Forward! (1991) reveals that an ideological split in the early 1990s among the CPP-NPA’s top leaders over the general direction that the revolution shall follow resulted in a divide between the “Rejectionist” (anti-Sison) bloc and the “Reaffirmist” (pro-Sison) bloc. The “Reaffirmists” accused the “Rejectionists” of leftist adventurism and rightist opportunism that undermined the revolution. The leftist adventurists departed from the protracted war concept and pushed the revolution into the urban centers, while the rightist opportunists espoused legal and parliamentary participation as the primary means of struggle relegating the armed struggle to the backdrop.

The document, together with other CPP-NPA published documents, also called for the implementation of the “back to basics” program to correct deviations and repudiate in particular the strategic counter-offensive (SCO) concept of the “leftist adventurists.” The SCO concept had resulted in large NPA formations decimated by the AFP. Also mentioned in the document is the assertion made by JOMA that the strength of the NPA is still in no match to the AFP. He directed to break down the NPA military formations back into platoons and squads and intensify mass works to recover the lost mass base left unchecked and regained by the AFP. JOMA pointed out that the continued decline of the party’s base would isolate both the party and army, as happened to the old CPP.

An analysis of the CPP-NPA documents previously mentioned as well as to other CPP-NPA Anniversary Statements published over the past two decades would disclose that the “back to basics” program of the 1990s was designed to alter the NPA development from vertical to horizontal in order to enable the NPA platoons and squads to cover a wider area and build as many GFs as possible, necessary for the survival of the Party and the Army.

In terms of ongoing counter-insurgency methodologies, the AFP has come up with Internal Security Operations (ISO) concepts and methods to address the internal security threats. One of these is the triad concept of Civil-Military Operations (CMO), Intelligence, and Combat Operations. There has been much debate over the years as to which triad component shall prevail over the rest.

The Philippine government grappled for the right solution to the country’s communist insurgency problem, while the AFP—with a mandate to conduct ISOs—initiated several campaigns to address this primary threat to the country’s internal peace and security, with little success. The ascent to the presidency by the then Senator Benigno Simeon Cojuangco Aquino III in the 2010 national election through an overwhelming victory gave hope for a speedy resolution of armed conflicts in the country.

The Aquino administration promoted the peace process as the centerpiece of its internal security program anchored on the overarching concept of “Unified Action,” a holistic approach which emphasizes that “the AFP will focus on the military dimension, while it will be supporting and/or assisting other government agencies in the economic and political dimensions” of insurgency (AFP Strategic Intent, p. 12). As regards to ISOs, “a grand plan in dealing with internal threats, including the non-traditional actors, had been laid out through the Internal Peace and Security Plan (IPSP) (Ibid., p.10).” While it is indisputablee that the AFP’s success in all of the aforesaid mission areas is crucial, it cannot also be an overstatement that its success in ISO is as critical as ever, for in order to focus on other mission areas especially in Territorial Defense, the current internal threats must be addressed first and foremost.

Jumel Gabilan Estrañero is a defense and security analyst and a university lecturer in the Philippines. He has completed the Executive Course in National Security at the National Defense College of the Philippines and has participated in NADI Track II discussions in Singapore (an ASEAN-led security forum on terrorism). His articles have appeared in Philippine Daily Inquirer, Philippine Star, Manila Times, Malaya Business Insights, Asia Maritime Review, The Nation (Thailand), Southeast Asian Times, and Global Politics. His specialties include the geopolitics of the South China Sea, counter-terrorism/insurgency, cybersecurity, peacebuilding, strategic policy, and intelligence.
Thanks for signing up! Please check your inbox for an email confirming your subscription.
PhilippinesSoutheast AsiaTerrorism
Share
You might also like
Foreign Policy