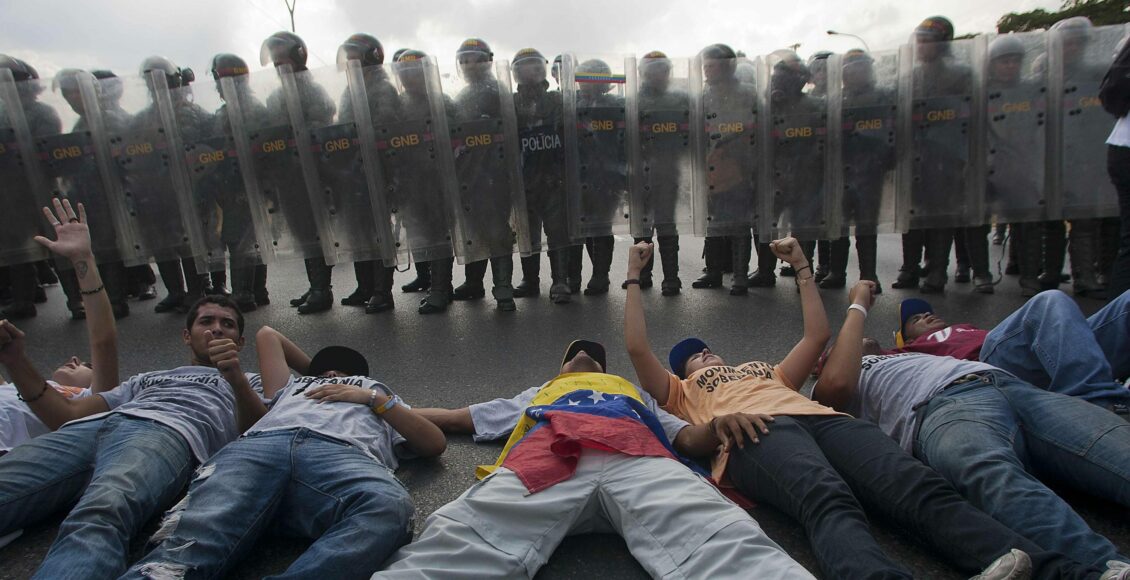 Venezuela is in the midst of a significant political and economic crisis that will have wide-ranging implications for regional security.

As the conflicts in Ukraine and the Middle East, and the threat of escalations on the Korean Peninsula continue to draw the majority of international media attention, Venezuela’s deepening political and economic crisis rapidly grows regarding significance for security in the Americas.

To understand the complexities the perfect storm of food and economic insecurity, political repression, and violence stemming from the absence of any form of law and order, we spoke to Jennifer McCoy, Ph.D., distinguished University Professor of Political Science at Georgia State University. Dr. McCoy served as Founding Director of the Global Studies Institute at GSU (2015-16), and Director of the Carter Center’s Americas program (1998-2015) where she led projects strengthening democratic institutions, provided mediation and encouraged dialogue and hemispheric cooperation. Her latest book is International Mediation in Venezuela (co-authored with Francisco Diez, 2011).

Dr. McCoy directed the Carter Center’s projects on Mediation and Monitoring in Venezuela (2002-2004), the Ecuador-Colombia Dialogue Group (2008-2010), and the U.S.-Andean Dialogue Group (2010-2011), and led over a dozen election monitoring and observation missions.

According to Dr. McCoy, three main scenarios could potentially play out. One of these is the current situation; people willing to publicly protest led by a unified opposition with specific demands are being met by the government with repression. If no concessions are made by the government, the unrest could potentially peter out if no change occurs.

This has happened twice before in the past three years. Venezuelan’s went out into the streets, drawing international attention, and resulting in dialogues that were sponsored by the international community. Each time, an exchange was sponsored and then protests died down, but nothing was changed as a consequence of the inter-party dialogues. The government and its economic policies continued, the social situation deteriorated, setting the stage for another crisis like the one we see now.

But what makes this round of protests different and more sustained is the lack of elections as an alternative means to resolve differences. The cancellation of all election options, as well as the Supreme Court’s undermining the authority of the legislature (the only institution controlled by the opposition), means the people are losing hope of peaceful means of changing the situation.

Russia and China have provided the Venezuelan government with financial support as it tries to hang on. The government is counting on the situation to improve—i.e., for oil prices to rise—before the presidential elections scheduled for late-2018. They’ve already delayed or all-out suspended local, regional, and governor elections and successfully halted an effort by the opposition to have a recall referendum that would cut short the president’s term.

The worst-case scenario for Venezuela

A prolonged economic crisis and food shortages, coupled with rapidly escalating violence and unchecked arms proliferation could lead to a civil war.

If there isn’t any meaningful resolution of the crisis or a decrease in public anger, Dr. McCoy says a significant escalation in tensions and armed conflict is possible, from what is currently mainly peaceful protests with low levels of violence.

Harsh repression has been widely propagated by the government or by government-armed militias and gangs. However, the risk of escalation increases due to the large number of young Venezuelans that are coming out and setting up barricades in the streets, mainly in the evenings after protests have ended, and engage in fights with police, the National Guard, and the government-armed gangs.

Dr. McCoy notes that the youths coming out in opposition aren’t using firearms. Instead, they’re using Molotov cocktails, sticks, and are setting fires in the streets. The danger here is if this low-level of violence escalates and spirals out of control with increasing levels of chaos and violence between civilian protesters, the political opposition, government-armed militias and street gangs, and government police and military forces.

Is Venezuela the Next Syria?

In some ways, it is possible Venezuela’s situation could escalate to the level currently observed in the Syrian civil war. That would be the absolute worst-case scenario, according to Dr. McCoy, with some fundamental differences. Both crises arose from food and resource shortages, but ethnic and religious factions—like those engaged in the Syrian civil war—don’t exist in Venezuela.

In Syria, the military has supported Assad partly because of the ethnic and religious alignments in the region and—to some degree—the belief that the armed forces best chances of survival lay with Assad. In Venezuela, the socialist Chavez movement arose from the military. It was when it incorporated some civilian leftist intellectuals that it became a hybrid civic-military coalition movement.

The Venezuelan military, however, has a long professional history, and members of the armed forces have been very reluctant to fire on their citizens, and have been pushing for the military to maintain the legitimacy and professionalism of the institution of the armed forces. Still unclear, however, is the degree to which the military has been politicized in Venezuela.

Since Chavez and his supporters came to power 15 years ago, they’ve made political promotions within the military, but it is unclear how far lower-ranking troops, who are also suffering from low salaries and food and medicine shortages, will support their superiors if they are called on to repress their fellow citizens.

How will the events in Venezuela affect the region geopolitically?

Geopolitically speaking, the situation in Venezuela is much different than the conflict in Syria. Venezuela’s neighbors are democratic. The Maduro government is also very conscious of legitimacy; it doesn’t want to be seen as an authoritarian regime—and a military takeover would carry the stigma associated with an authoritarian ruler. In this day and age, military coups aren’t as accepted in the Western hemisphere.

While the worst case scenario is Venezuela devolving into civil war, Dr. McCoy believes that point is still some ways off. Venezuela’s democratic neighbors—Columbia, or Brazil, for instance—would likely exert tremendous pressure on the government and security services in Venezuela to negotiate an end to hostilities before it escalates into a full-blown civil war.

If the worst is to occur, with continued failures of the state to govern effectively, if the country enters a state of general lawlessness, then there will be repercussions for the entire hemisphere, as well as Europe, Dr. McCoy says. While Venezuela doesn’t produce drugs, it’s a major transport hub for drugs going to Europe and even to Africa before making their way to Europe.

Drug trafficking increases under lawlessness, as we saw in Honduras after 2009. There was a coup, and for a while, the country was run by a fragile government, and lawlessness increased dramatically. Now, Honduras has one of the highest homicide rates in the world. Countries like the United States are seeing a significant increase in the number of people arriving from countries like Honduras that are plagued with violence.

An actual collapse of the state in Venezuela would likely mean large numbers of economic migrants and refugees fleeing the violence. Notably, the Venezuelan border with Colombia would be most fragile. For a while, Venezuela closed the border with Colombia as thousands of people would try to cross the Amazon into Colombia just to try and get food or medicine.

If the security situation in Venezuela worsens, the Colombian border would be the main point where people would cross. Internally, Colombia is just starting to get its peace agreement in place, so further destabilization in Venezuela could have significant ramifications for Colombia.

Dr. McCoy discussed a third potential outcome for the situation in Venezuela: a negotiated solution. A negotiated settlement means addressing the food and medical shortage and ensuring people’s basic survival needs are met while providing international economic support on the condition that specific political and institutional reforms are implemented.

Years ago, Venezuela cut itself off from the Inter-American Development Bank, the IMF, and the World Bank. Since then, it has been relying on loans from Russia and China in exchange for oil as collateral, but that’s increasingly becoming an unsustainable source of funding for the Venezuelan government.

China and Russia are becoming more leery about continuing to loan new money because of depressed oil prices, instability, and their internal problems. As a result, Venezuela’s financial options are thinning out. However, Dr. McCoy notes that negotiations could resolve this issue in this third scenario, which is the most optimal.

In exchange for international aid, the Venezuelan government would have to agree to implement changes in monetary and fiscal policy and to reinvest revenues, particularly in the nationalized oil sector. The national oil company has lost its capacity to produce efficiently and in the required volume. Venezuela’s commodity-based economy needs an efficient oil industry to generate sufficient revenue to reinvest in other sectors to promote a more diversified economy.

Additionally, the government needs to agree to political negotiations, as well. The independence of Venezuela’s democratic institutions has been critically undermined, so there needs to be a significant effort to restore the independence of the judiciary, the legislative branch, the security forces, and the media, in addition to setting in place a timetable for elections.

The problem, Dr. McCoy says, is that the government is reluctant to hold elections because if they perceive it as an all-or-nothing situation if they (the Maduro government) falls out of power. If the Chavez movement loses control of the Venezuelan government, they fear recrimination and are afraid of losing all the gains they’ve made—in their eyes—for the Venezuelan people through what Chavez called his “Bolivarian revolution.”

There is significant corruption that permeates the government and armed forces, and reported criminal activity, as well. Therefore, many officials will be reluctant to risk giving up power if they think they will be tried and punished, or if they expect a witch-hunt without due process.

Also looming over members of government is the possibility of extradition to the United States. This threat is particularly worrisome for those who’ve already been indicted in the U.S., or who have had sanctions imposed upon them by the U.S. in response to corruption, drug trafficking, or human rights abuses.

Transitional justice is usually implemented after countries have emerged from a civil war with a peace agreement, or after a transition from a military dictatorship or authoritarian regime to a democratic system. In the past, it has granted pure amnesty to everybody.

Now, Dr. McCoy says, transitional justice typically provides reduced sentences for abusers of human rights, and potentially for corrupt officials, conditioned on their agreeing to provide compensation to the victims or the country, acknowledge responsibility and tell the truth, and guarantees not to repeat the criminal activity.

Some form of negotiation must include elements transitional justice to ensure a peaceful transition of power, and more importantly, to even have the ability to hold elections where it’s possible that the government could be ousted.

What’s at stake for American interests?

A failure to reach a solution in Venezuela would have considerable implications for American interests, both economic and national security. A failure would result in a marked increase in the number of Venezuelan’s fleeing the country, either seeking better economic opportunity or fleeing political violence and oppression.

This risk involves the point that if there is a state collapse, oil production will likely cease in Venezuela and worldwide prices escalate. An interruption in oil exports to the U.S. from Venezuela has never before occurred, despite political tensions and lack of ambassadors in each country.

The criminal and extremist activity would increase in the absence of order. There have been allegations that Venezuela has sold visas to Hezbollah in Iran, Dr. McCoy says, noting that these haven’t necessarily been concretely proven, but provide a window into the range of threats that could emerge from Venezuela if it became a failed state.