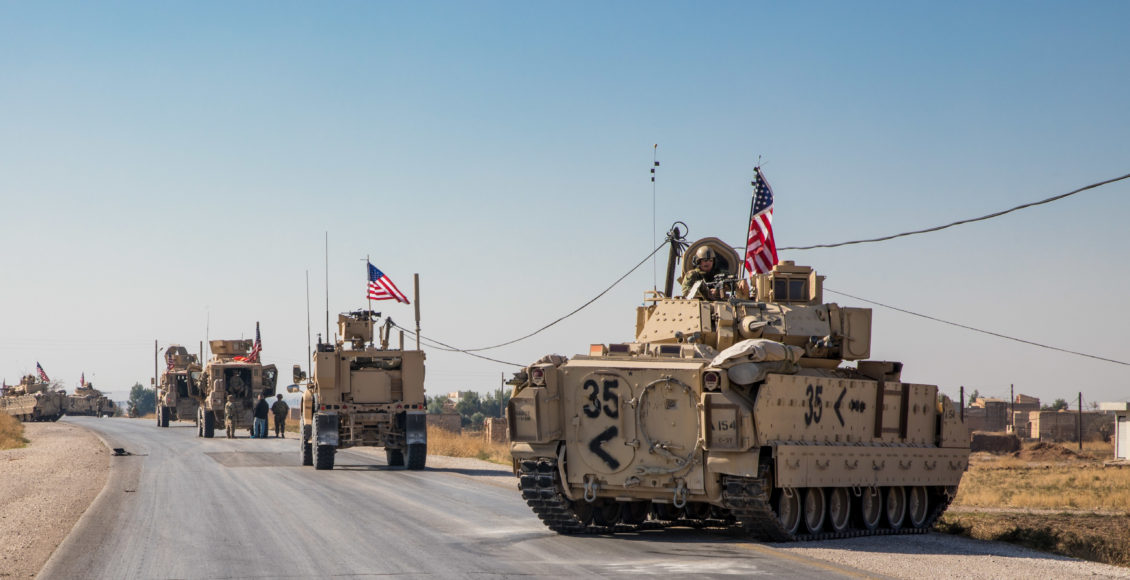 It’s been nearly a decade since the war in Syria began due to public discontent towards the regime’s handling of the country’s political affairs. Resentment grew into open revolt, which grew into a civil war, begetting chaos, bloodshed, and foreign intervention. Over the years, many experts and pundits have that Russia and Turkey are the new major players in Syria. However, the situation is far from what it seems. The reality is that the United States has and will continue to be a dominant influence in Syrian and Middle Eastern affairs for the foreseeable future. Regardless of the reduction of American troops in Syria, the U.S. has been successful in utilizing other powers in aiding its policies in Syria.

There is a chance that Bashar Al Assad is going to depart from his position of power in the near-term. The regime, however, will continue to hold power—the U.S. prefers to maintain the current regime, which has been a long-term American policy. For the United States, the maintenance of the current regime is the only viable solution, which can aid its interests in the future. This dilemma of whether or not to replace the current Syrian regime has been ongoing since the Obama era, where an alternative regime could not be found to replace the existing one. Thus, the Obama administration initiated a covert CIA program to fund the Free Syrian Army (FSA) factions in southern and northern-western Syria that the administration deemed to be moderate. The reason for this program was to create a stalemate between the regime and the rebels due to Obama’s stated goal of reducing the presence of U.S. troops in the region as a result of the Bush Administration’s debacles in Iraq and Afghanistan. In short, the Obama administration wanted to maintain the regime while preventing it from prevailing over the country.

There is also another reason for upholding the Syrian regime, which benefits both the U.S. and Israel. Over the years, both Hafez al Assad and his son Bashar have utilized a rhetoric of invoking the Golan height lost due to the 1967 war as bolstering the regime’s popularity and the regime’s survival. Thus, it is arguably in the interests of both the U.S. and Israel to preserve a weakened Syrian regime. And Turkey and Russia have been aiding the U.S. plan in Syria for some time now.

When Donald Trump assumed the U.S. presidency, he disputed the efficacy of Obama’s strategy as well as the presence of American troops in Syria. Thus, Trump disregarded the notion of backing rebel groups in Syria, arguing that it would fuel further Islamic extremism. Besides the tensions between the U.S. and Russia, which is standard between adversarial great powers, there has also been much cooperation between the two. Russia has maintained a presence in Syria since Obama’s time to support the Syrian regime and in fighting ISIS. After Obama, President Trump has also coordinated with Russia over the past few years in accelerating the defeat of ISIS through forming a temporary partnership based around counterterrorism—something which Obama could not fully accomplish.

The Trump Administration’s objectives have been based on withdrawing U.S. troops from Syria as much as possible while leaving Russia to back the Assad regime through military force.  Where America has continued to utilize Russia in supporting Assad from the air and simultaneously in defeating ISIS. In reality, however, Russia is not content with being in the region since Syria is not a geopolitical imperative for Russia unlike, Ukraine, the Caucasus, and the Baltics; therefore, Russia has remained trapped in Syria.

Russia also hoped that cooperation with the U.S. by getting involved in the Syrian crisis could somehow aid in removing the U.S. and EU sanctions due to its Crimean annexation of 2014. Mike Pence suggested that the administration’s decision on sanctions would depend on whether “we see the kind of changes in posture by Russia and the opportunity perhaps to work on common interests,” including making common cause against the Islamic State. As for the E.U sanctions, they can be removed by the U.S. pressuring the Europeans through applying sanctions on Nord Stream 2 pipeline, which Europe depends on. Although Russia has learned to work around the sanctions, they have continued to pose a considerable amount of pressure on its economic health. Perhaps more importantly, Russia intervened in Syria to convey its material heft to the world, which makes more sense psychologically than strategically. Putin’s ultimate goal has been to show off Russia’s military capabilities and preserve its commercial interests. When Russia sustained an air campaign in Syria for an approximate period of two months, the world was amazed by its military capabilities. Putin is most concerned with the appearance of Russia’s strength.

Thus, Russia cannot withdraw from Syria without achieving some sort of military victory on paper. Otherwise, the whole Syrian intervention would be useless—a scenario that Putin wants to avoid at all costs. By creating a quagmire, America has restrained Russia in Syria to create further complications for Moscow since being in Syria would distract Russia from its primary geopolitical imperatives. This is why the Trump administration did not reject Russia’s presence in Syria after Obama’s departure as it did in comparison to the U.S. funding of rebels and the presence of American troops in Syria.

The justification for both the Trump and Obama administrations to coordinate with Russia is twofold: it enables the U.S. to focus its military power elsewhere, also trapping Russia in Syria, further economically straining the Kremlin. Russia will always remain a foe in America’s eyes and vice versa. Clinton, Bush, Obama all have tried to carve out Russia over the years since America’s policy revolves around Eurasia, and Trump is not so different. The installation of missiles in Poland in 2007, the Withdrawal from the Anti-missile ballistic treaty (ABM) in 2002, which was criticized by former U.S. Secretary of Defense William Perry, and NATO. Are are all indicators of the U.S-Russian rivalry, which goes back to 1917, and America has continuously tried to apply a different approach to prevent a rise of a regional hegemon in Eurasia. The overall policy remains the same, but the styles and means of carrying out that will continue to change—successive presidents will employ different strategies in executing the same policy.

Russia’s role in Syria really demonstrates the United States’ paramount power: it wields a significant amount of influence in the Middle East despite the fact that U.S. relative power is diminishing. Putin thought that Syria would be a simple mission, which would help to restore Russia’s great power image, but reality begs to differ. So far, Russia has revolved around American policies within Syria, which is quite embarrassing for a self-described great power. This is because the Middle East remains within America’s sphere of influence, not Russia’s.

Turkey’s role strictly orbits around America’s policy towards Syria. Just days after the U.S. envoy for Syria arrived at Ankara in December 2018, Turkish President Erdoğan announced a Turkish incursion within northern Syrian. However, this was a massive blow to the Kurdish fighters in Syria- American allies. During the same month, Pentagon spokesperson Sean Robertson stated that any unilateral action within northeast Syria was “unacceptable”. This statement was released since the Turkish intervention would affect the U.S. relationship with its Kurdish partners, which Turkey planned on targeting. Following the Pentagon’s statement, Turkey paused its new military operation in northeast Syria as it found itself trapped between two conflicting views emerging in Washington. After the dispute was settled in Washington, a few days later, the Turkish president then announced the continuation of the military operation in northeast Syria. Erdoğan and Trump spoke by phone and agreed to ensure “more effective coordination” between their countries’ military operations in Syria. These events indicate that Turkey is broadly abiding by American policies.

When Trump decided for the second time in 2019 to withdraw more U.S. troops from Syria, it left Kurdish fighters in Syria even more exposed to Turkish military assaults. Why would the U.S. betray its allies in such a manner? The reason for the withdrawal was to help the Assad-regime regain its grip on the country, where it left the Kurds with no other alternative except to surrender and return to Assad, and once again come under his regime’s control. There was no other rational option that the Kurds could have pursued to maintain their survival. Thus, the withdrawal of U.S. troops has brought the U.S. plan one step closer to fruition, which is preserving the Syrian regime in a weakened state. James Jeffrey stated, “we want to have cooperation with Turkey across the board on all Syrian issues. He further pointed out that the Kurds were always a tactical maneuver in Syria.

Turkey has aided the U.S. plan for Syria by fighting ISIS and forcing Kurdish fighters to align themselves with the Assad regime. In early March of 2020, the Turkish shelling of the Russian-backed Assad regime forces left the regime vulnerable—having failed to protect their frontline against repeated Turkish and rebel assaults. However, Russia was unwilling to respond to Turkey’s actions. A week later, Russia and Turkey reached a cease-fire in Idlib province, which was subsequently violated by the Assad regime within 15 minutes of implementation. Moreover, Erdoğan warned a month later that Damascus would suffer “heavy losses” if it continued to violate the cease-fire, where the Syrian regime was using the novel coronavirus as a pretext to yet-again renege on the agreement.

Both Russia and Turkey have played a role in supporting U.S. policy in Syria, which is to preserve—in a weakened state—the Assad regime. Thus, Russia has allowed the Syrian regime’s hatred for the Turkish to manifest into military action, which would result in Turkey retaliating through its military assaults on the regime’s land forces, which would result in weakening the regime even further than it already is. As Russia helped the regime regain back most of the territory in Syria, it had simultaneously allowed occasional Turkish assaults on Syrian forces. This illustrates that both powers—Turkey and Russia—are working (wittingly or unwittingly) to achieve the U.S. plan in Syria- even though both sides have displayed animosity towards each other, but has not got in the way of supporting the U.S. America is able to achieve all this since the international system is based upon U.S. hegemony.

Hashim Abid is a political analyst and researcher with a degree in International Relations from the London School of Economics.