After a cryptic department-wide memo some are asking if Secretary James Mattis is trying to send a message.

Early in August and without pretext, Secretary of Defense James Mattis circulated a memorandum to Defense Department staff stressing the importance of ethics, saying he expects all staff, uniformed and civilian, “to play the ethical midfield.”

The Department did not provide any further specificity regarding Secretary Mattis’ motives in sending the memorandum. The memo, dated August 4, 2017, reads as follows:

MEMORANDUM FOR ALL DEPARTMENT OF DEFENSE EMPLOYEES

SUBJECT: Ethical Standards for All Hands

I expect every member of the Department to play the ethical midfield. I need you to be aggressive and show initiative without running the ethical sidelines, where even one misstep will have you out of bounds. I want our focus to be on the essence of ethical conduct: doing what is right at all times, regardless of the circumstances or whether anyone is watching.

To ensure each of us is ready to do what is right, without hesitation, when ethical dilemmas arise, we must train and prepare ourselves and our subordinates. Our prior rejection and our choice to live by an ethical code will reinforce what we stand for. so we remain morally strong especially in the face of adversity.

Through our example and through coaching of all hands, we will ensure ethical standards are maintained. Never forget, our willingness to take the Oath of Office and to accept the associated responsibilities means that even citizens who have never met us trust us to do the right thing, never abusing our position nor looking the other way when we see something wrong. I am proud to serve alongside you.

Mattis’ framing of the idea of training as mindfully engaging in ethical conduct—at all times—could be interpreted as a subtle nod towards potentially trying events to come. Events, where the Department of Defense, must maintain its integrity and ethical responsibility at all costs. 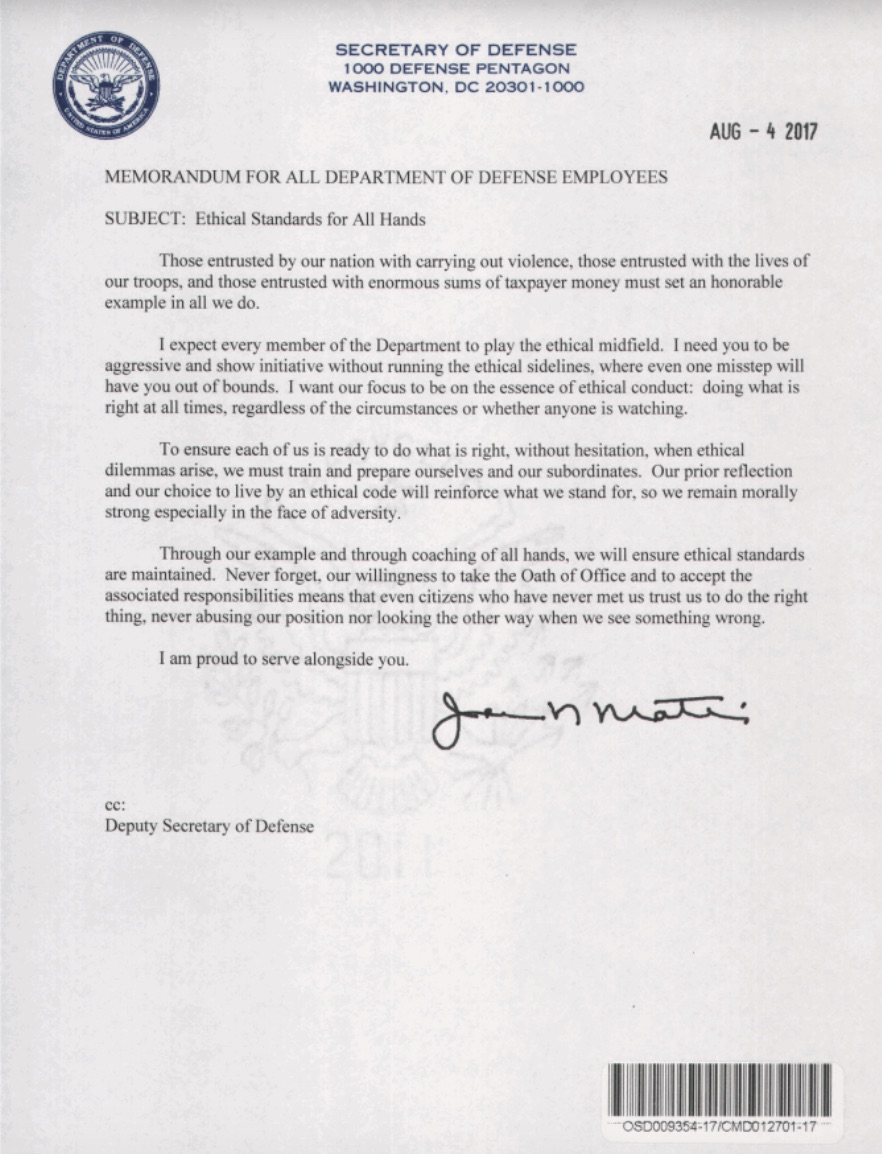 Also worthy of recognition is Mattis’ point about upholding the trust that others place in the organization. The trust Mattis speaks of is far more valuable and significant than the trust an employee has in an employer. He speaks of the faith the American people have in their armed forces in their ability to protect them and the national security of the United States. The legitimacy of the U.S. is partially guaranteed by its supposedly civilian-controlled military, and Mattis (while a retired 4-star general) knows that trust and legitimacy must be maintained at all costs.

Why was the memo distributed?

One assessment is that Mattis could be telegraphing a message that staff should still respect and work with transgender employees. Other military leaders have already begun dismissing the president’s directive.

Another read of the memo is that Mattis is warning DoD employees against obeying any illegal orders that Trump might soon issue, on Twitter or otherwise. One can’t dismiss that idea either, especially since Congress just departed for August recess. If Trump wanted to try something crazy (firing attorney general Jeff Sessions and special counsel Robert Mueller, for example), now would be a natural time for him to do so.

Mueller has convened a grand jury to keep pressing the investigation into possible collusion between the Trump campaign and the Russian government. Subpoenas are flying. Document requests have been sent. One target of the investigation seems to be erstwhile national security adviser Michael Flynn, who served in the Army for 33 years until he was forced out in 2014. Then he began his second career shilling for Russia and Turkey.

Department employees or serving members of the armed forces may have documents in their files that Mueller wants to read. Mattis may be reminding them that, even in these bizarre and difficult times, they are duty-bound to do the right thing.