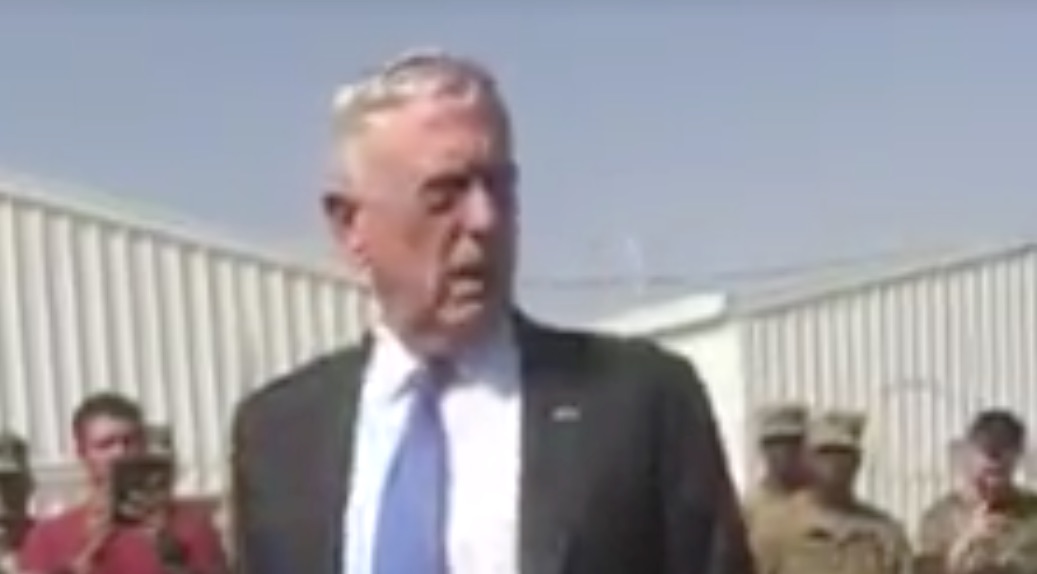 In a candid conversation caught on video, Secretary Mattis urged troops to “hold the line until our country gets back to respecting each other and showing it.”

A video has emerged on Facebook of Secretary of Defense James Mattis telling a small group of American troops, “You’re a great example of our country right now.” He went on, “Our country, right now, it’s got problems that we don’t have in the military. You just hold the line until our country gets back to understanding and respecting each other and showing it.”

Mattis added that the United States has historically had “two powers” in facing the rest of the world: inspiration and intimidation. The U.S. has lost the former, the secretary said before saying, “we’ll get the power of inspiration back. We’ve got the power of intimidation, and that’s you…If someone wants to screw with our families, our country, and our allies.”

“You just hold the line,” Mattis told the troops—hang on to your toughness and your values—until things back home straighten out. The question is how far that line extends and how far he would go to hold it.

Mattis is using specific words for a specific reason.

Mattis seemed to stop short of crossing any lines in the president’s authority. He didn’t rebuke Trump directly or even mention him by name or title. It’s worth repeating the preface to Mattis’ “hold the line” imperative: “You’re a great example of our country right now. Our country, right now, it’s got problems that we don’t have in the military.”  Seen as a “Praetorian guard-like” statement by some, another interpretation of the impromptu speech is that Mattis is reiterating that the armed forces are apolitical and that the integrity of the military must remain intact, and continue to do so in the event of further political friction or even violence.

The use of the word “until” when Mattis says “hold the line until our country gets back to understanding and respecting each other and showing it” is worth noting. It could imply that Mattis sees the domestic political situation as being more top-down than grassroots; that it will be solved or at least alleviated to a measurable degree within a reasonable amount of time. Beyond this is speculation, but we do know that Mattis chooses his words mindfully, understanding the extent to which his words matter.

Is Mattis the “acting” Commander-in-Chief?

In May, NSA Director Mike Rogers reportedly told agency employees that the agency is in possession of damning SIGINT evidence relating to the Russia investigation. As Defense Secretary—a senior-level cabinet member, and a Principal member of the National Security Council—Secretary Mattis would undoubtedly be aware of any such evidence.

This isn’t quite how democracy is supposed to work in the United States. There’s a reason the Founding Fathers stressed the need for civilian control of the military. The founding documents of the Defense Department—formed 70 years ago—re-iterate that. It’s customary for the armed forces to serve as the bulwark against foreign enemies; they’re typically not used to do so against the whims and outbursts of the country’s elected commander in chief.

While unusual, this isn’t the first time the military has had to deal with an unstable President.  During the final weeks of Richard Nixon’s presidency, Nixon was so out of touch that he was losing the ability to exercise the powers of his position.

For weeks, the day-to-day operations of the White House — and, really, the Presidency itself — were handled by General Alexander Haig, a four-star Army general and the White House Chief of Staff. Secretary of State and National Security Advisor Henry Kissinger had near-total control and oversight over U.S. foreign policy.

Even early into his presidency, Nixon exhibited instability. Describing events that occurred nearly five years before Nixon’s resignation, Former CIA analyst George Carver reportedly said that when the North Koreans shot down a US spy plane in 1969, “Nixon became incensed and ordered a tactical nuclear strike… The Joint Chiefs were alerted and asked to recommend targets, but [Secretary of State] Henry Kissinger got on the phone to them. They agreed not to do anything until Nixon sobered up in the morning.”

“Al Haig is keeping the country together, and I am keeping the world together.” – Secretary of State Henry Kissinger in 1974

In the weeks immediately preceding Nixon’s resignation, Secretary of Defense James R. Schlesinger urged General George S. Brown, Chairman of the Joint Chiefs of Staff, not to take military orders directly from the President. In an attempt to save the country from any extra-constitutional power grab by a desperate President, the military chain-of-command took the extra-constitutional step of removing the President from the loop.

Schlesinger also considered options to remove the President from office forcibly. If it were necessary, the Defense Secretary’s tentative plan was to send the 82nd Airborne from Fort Bragg, North Carolina to Washington, D.C. As it turned out, Nixon resigned, and these contingencies remained just that.

If events spiraled in another direction, and if Brown had obeyed Schlesinger instead of Nixon, that would have amounted to significant insubordination. In another country, similar events would be considered to be a coup. While haven’t reached that point today, one can certainly imagine Secretary Mattis and Chief of Staff Secretary John Kelly thinking what they might do if an increasingly embattled President Trump issued an unusual order of his own.