After the conspicuous 2008 invasion of Georgia, the 2014 Crimea operation employed subtle tactics to seize critical points of interest and secure order. 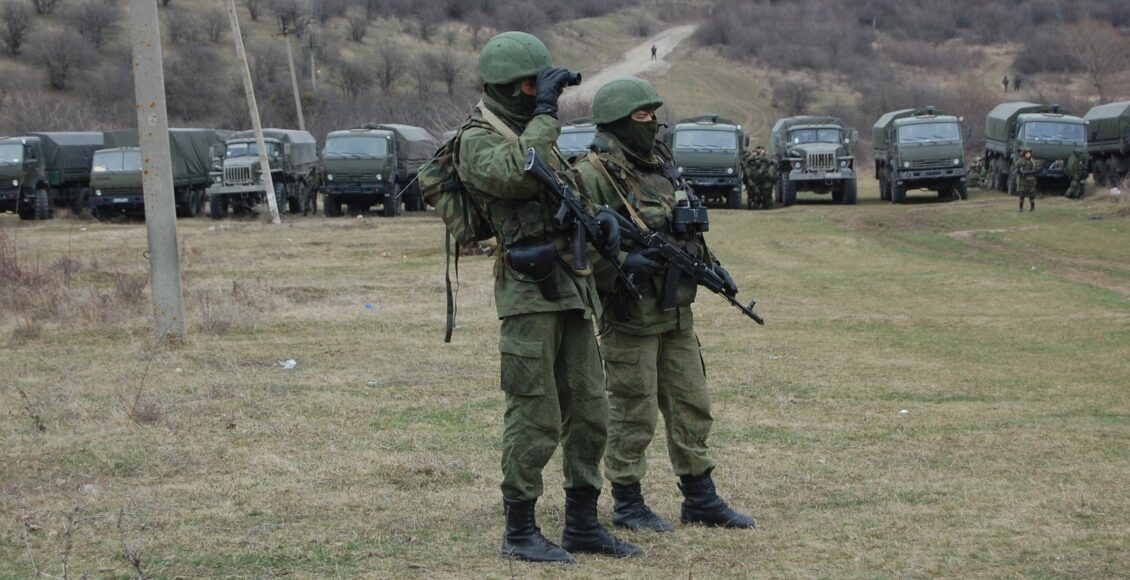 Russian special forces in Crimea. Sometimes called "little green men," they were one of the offensive "columns" that resulted in their annexation of Crimea from Ukraine.
Share

From the beginning of Russia’s engagement in Crimea, there was a profound emphasis on maintaining a degree of plausible deniability.

The Russian flag was raised by residents of Crimea, not Russian soldiers. Russian forces were stripped of any identifying markers or insignia. Cyber attacks launched at Ukrainian infrastructure and internet domains were structured in a manner that obfuscated Russia’s involvement.

It’s widely understood that Russia was responsible for the violation of Ukraine’s sovereignty. However, the confusion spawned by the disinformation campaigns, cyber attacks, and unmarked special forces, and the later actions in eastern Ukraine, would see the west committing further inaction allowing the Kremlin to consolidate, and then normalize the acquisition of Crimea by the Russian Federation.

After the conspicuous invasion of Georgia in 2008, the 2014 Crimea operation employed subtle paramilitary and special forces to seize critical points of interest while securing internal order. Russia applied a  broad swath of non-military, hybrid or “non-linear” warfare tactics designed to foster the rapid integration of the Crimean political, security, media, and financial sectors with those in Russia.

The period between the initial “invasion” of information and cyber attacks and the eventual referendum deciding Russian sovereignty over the peninsula was little more than a month.

The military involvement served as a deterrent to Ukrainian troops, while the lack of insignia or identifying features on Russian special forces provided a degree of plausible deniability. Accordingly, the NATO powers in Europe and North America would not have apparent cause to intervene.

Simultaneously, the political, economic, and information warfare campaigns that had been set in motion were masked by the threat of a full-scale Russian invasion in other parts of Ukraine.  Russian troop mobilizations and activity near the Ukrainian border diverted international attention from Crimea while pro-Russian non-military measures were implemented to politically, socially, and economically integrate the Crimean peninsula with Russia.

Having learned the mistakes of overt military action, and the risks that such action has for becoming embroiled in a heated civil war, Russian military strategists employed a mixture of both state-sponsored actors, state actors, and pro-Russian Crimean civilian protestors and militia groups.

All state-actors in Crimea were bereft of identifying marks that would associate Russia with the incursion.

All that was required for the Kremlin to deny any responsibility was for their special forces to show up wearing un-flagged uniforms. Regarding ensuring the viability and legitimacy of their actions in Ukraine, Russia proceeded to launch an aggressive campaign in the United Nations. As they had done before their 2008 invasion of Georgia, their disinformation campaign extended to Russian delegates at the United Nations.

Russia’s ambassador repeatedly—and forcefully—asserted that Ukrainian authorities were threatening and committing acts of violence against ethnic Russians in Ukraine. Superficially, the carefully crafted (artificial) legal context for this argument was structured similarly to the 1999 NATO bombing of Yugoslavia.

It must be noted that the latter was to ensure the security and existence of critically vulnerable civilians. This is a stark contrast to the underlying reason for Russian aggression, which is to provide the continued hegemony of Russia in the post-Soviet space.

The efficacy of the Crimean campaign (and Russian non-linear warfare as a strategy) is evidenced by two factors.

One is the degree to which Russia was able to normalize the annexation. The other is the masterful execution of diplomatic and legal rhetoric which rendered the West inability of Western military intervention, to realize a controlled process of de-escalation and normalization.

The ongoing exploitation—and arguably weaponization—of International law and legal framework by State actors posits a critical urgency to reform theoretical conceptualizations of international law governing conflict, especially since purely conventional battles will be the exception in the 21st century. The blending of non-linear tactics with plausibly deniable conventional forces actively threatens the rule of law in the international order.