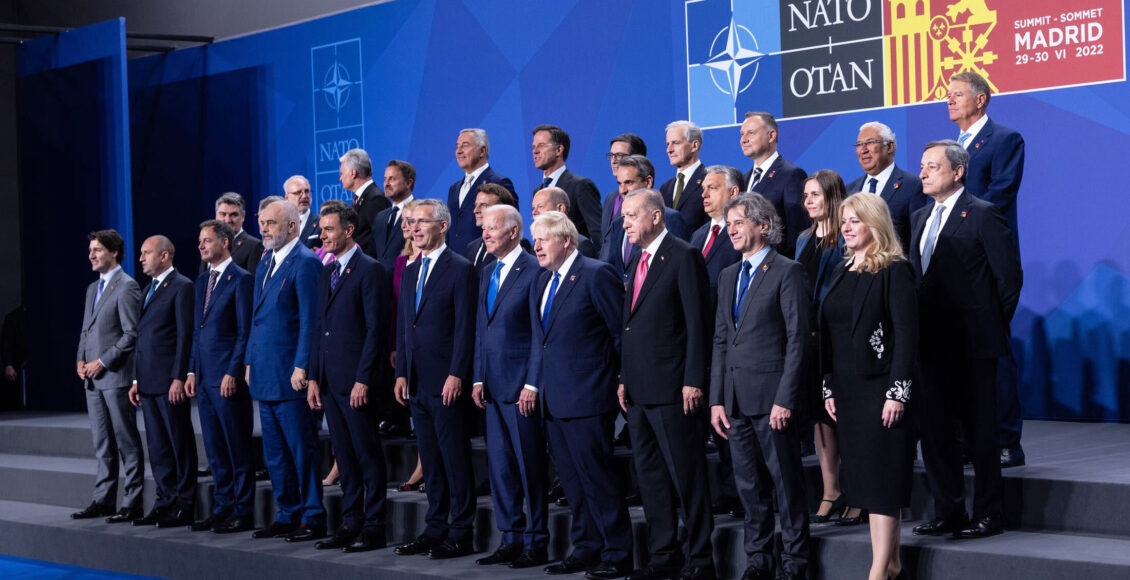 Official portrait of NATO Heads of State and Government
Share

As the world gazed upon Speaker Pelosi’s flight route last month, be it via flight tracking apps, minute-by-minute coverage on CNN or various policy speculators huddled in D.C. corridors, one aspect was clear collective American and, by defacto, NATO might was emulated via the office of the Executive, represented by the Speaker upon arrival, not the systematic functions of the State Department seeking to place diplomatic ‘balance’ above the individual commitment to global security amidst a slew of threats from Beijing.

Amongst the backdrop of the shared concern for Taipei’s security threats permeated all levels of society from the People’s Republic of China via the Chinese Communist Party or, in other words, directly from Xi Jinping himself, with each statement indicating a China that has now positioned itself as not simply our competitor but rather our collective foe.

The capabilities of the Chinese People’s Republic are correlated heavily to a system of governance allowing them to grant the Executive with a full ‘vestiture’ of power, able to threaten our way of life in an instance and further strike at us via hypersonic missiles that no longer require local positioning close to our borders to reach our very zip codes themselves. China doubles down on its executive privilege by being able to bypass (via non-existence) the equivalent of Senate Appropriations to arm our foes. At the same time, we are left to the mercy of special interest groups and biased lobbies when seeking to arm NATO allies such as the Republic of Turkey. They require a trifecta of F-35s, Patriot missile defense systems, and shared hypersonic missile placement to counter the Russian Federation on the Southern and Eastern Flank of the Transatlantic Alliance. The case is clear for more power to be granted to the Executive in the United States as well as NATO nations to ensure that we can utilize statecraft at its ‘maxima’ concerning both committing to and executing both our unilateral and shared national security objectives against President Putin who enjoys the largesse of a modern Ivan the Terrible and Xi Jinping seemingly governing China in a manner akin to Emperor Wenzong of Qing.

A system of governance that vests further direct command to NATO leaders domestically, notably in matters concerning military deployment as well as the provision of strategic hardware amongst allies, is imperative in the current backdrop globally, which is far more reminiscent of the permeations before the First World War juxtaposed with that of the implicit build-up to the Cold War. To enable such prowess overseas, notably in countries that already function within a Presidential system within NATO, such as the United States and the Turkish Republic, domestically, systems must be in place to ensure local stability. One such successful structure that provided our security in the West for many decades against the Soviet Union was referred to as GLADIO or, in other words, “Stay-Behind,” with the coinage being that military-civilian structures were in place to ensure both the continuity of the state in the event of a Comintern invasion or domestic subversion campaign and on day-to-day basis combat local anti-NATO illegal organizations and cells from endangering the lives of one’s populace and to halt any infiltration at the time by Soviet assets within Western governments. Recently, Chinese assets were identified within the U.S. Treasury Department, and Russian Agents were charged with acts amounting to seeking a total dismantling of the American political system; therefore, our foes have already commenced actions indicative of exploiting our systematic institutional weaknesses and domestic “Stay-Behind” structures are crucial to combat China and Russia’s campaign to use our form of Democracy, with all its benefits and caveats, in a manner to undermine our way of life.

There are two very successful organizations in this regard which were exemplified historically by the United Kingdom and the Republic of Turkey, one being the “Force Research Unit” (F.R.U.) and the other “Kontrgerilla” (Counter-Guerrilla) respectively for both nations. The F.R.U. exemplified the British Army’s clinical response to the thousands of killings carried out by the Separatists in Northern Ireland with heroics displayed by the late Captain Robert Nairac, with the section’s activities being noteworthy in combatting both the domestic strife caused by the illegal separatists as well as stopping overseas support provisioned to them by the Soviets. In the Turkish Republic, against a backdrop of compounding political tensions between the 1970-the 80s, Counter-Guerrilla successfully defeated a plethora of illegal Stalinist, Marxist and Leninist groups seeking to destabilize the NATO member nation domestically and thus ensuring the structure and continuity of the state while cutting off Soviet support for such cells providing NATO with shared security from Istanbul to Washington.

Whilst the populace in the United States bemoans a political system where such discontent is evident by the recent creation of the Forward Party whereby though insignificant with regard to political clout, is sufficient emphasis that those chosen to lead our nations are not fulfilling their vows “spoken upon thee” when first seeking office, the fact is that no matter the individual, no matter the party, unless the Executive has parity of power with regard to governance at a level that is comparable with the executive privilege enjoyed by our superpower foes who are seeking to undermine the rules-based international order, then we run the risk of losing the war of “Great Power Competition” and unless we streamline our institutional governance to prioritize whomever we choose to lead us, empowering them also with the apparatus to mobilize and safeguard our national security via clandestine our very way of life in the West itself may be at the mercy of the next stage of Beijing’s Hypersonic missiles.

Alp Sevimlisoy is an internationally published geopolitical strategist & national security expert on NATO’s role within the Mediterranean, focusing on regional unionism and defense policy and a Millennium Fellow at the Atlantic Council headquartered in Washington, DC. Alp Sevimlisoy is also the CEO of his flagship private asset management corporation & hedge-fund headquartered in Istanbul. He has also published extensively on the role for a unified Mediterranean Command Structure within NATO. He has served as an advisory board member at Bayes Business School (formerly Cass Business School). Alp Sevimlisoy has been featured by Newsweek, the National Journal and the Foundation for Defense of Democracies (FDD) and the Centre for the National Interest (CFTNI). Alp Sevimlisoy’s editorials have been regularly published in the National Interest, The Hill and Israel Hayom.

Peter Woodard is an executive with a geopolitical focus on the moving parts within NATO and the potential for an expanded role within the region. He has spent considerable time consulting stakeholders in Mexico on its role in supporting Western initiatives including USMCA (formerly known as NAFTA). He has co-authored editorials focused on international affairs. Peter Woodard’s editorials have been regularly published in the National Interest, The Hill and Israel Hayom. Peter’s publications have been featured by the Foundation for Defense of Democracies (FDD) and the Center for the National Interest (CFTNI).