Middle East Versus the West? How a UN Diplomat’s Christian Perspective Resonates with Today 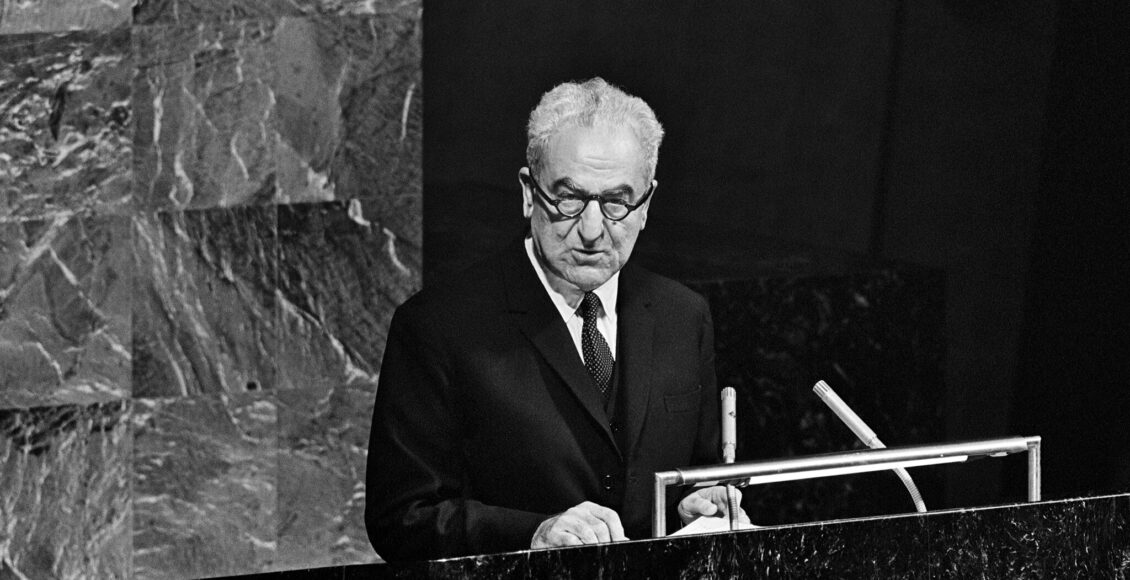 “Lack of love. Strategy, commerce, exploitation, securing an imperial route: these were why the West, for the most part, came to the Near East, not because it loved us. Add to this the immense racial arrogance of modern Europe. The West has not been true to itself, and therefore it could not have been true to us.” – Charles Malik, “The Near East: The Search for Truth,” Foreign Affairs, Jan. 30, 1952

August 2, 1990: the end of the Cold War and the revival of imperialism in the Middle East. American troops have indisputably experienced the darkest bounds of these wars. Still, no one warned us about the consequences that three decades of missile launches would have on Middle Eastern civilians, their culture, and quotidian lives — except renowned philosopher, diplomat, and scholar — Charles Malik. The former UN Diplomat and General Assembly President faithfully preached for an autonomous  Near East and disapproved of any external engagement that deterred it.

To understand why foreign interference hinders the chances of peace and prosperity in the region, we must first acknowledge its significant effects on its indispensable assets. Malik humbly reminded us that all of humanity culturally and genetically originated within a 900-mile radius around Jerusalem, Beirut, or Damascus — including modern-day cities of Alexandria, Constantinople (Istanbul), Athens, and Mecca. In a 1952 Foreign Affairs piece, he referred to the complex region as the “Cradle of Civilization,” rich in ancient history, culture, and common agricultural staples which advanced human progress.[1] Malik aimed to synthesize two perspectives that many considered antithetical; the West and Near East are deeply linked, a departure from the perspective that the two civilizations would always clash. Since Malik’s era, the modern dichotomy exacerbated from the Cold War to the War on Terrorism. In our post-9/11 minds, the West seems to perceive the other to be unsaveable.

Malik lived through arguably the most volatile decades of the 1900s, coming from a region stitched with eternal violence and genocide. His bold ideas were unique and challenged powers who sought to define borders according to their interests, including the British and French mandates for Syria, Lebanon, Palestine, and Iraq. Despite his Christian Orthodox faith, he sided against the British, another Christian Empire, and their century-long occupation that hindered Egyptian sovereignty and its potential to lead the region into a new era of peace and security. Malik particularly disapproved of France’s influence on his Lebanese homeland and the post-World War I Sykes-Picot Agreement that essentially placed its population (along with Syria) under French social and economic control. Though Lebanon declared its independence in 1926, the struggle for complete autonomy would last an additional twenty years.

As Lebanese Ambassador to the United States and the United Nations, the thriving scholar embraced his political inclinations when he vocalized without hesitation his disapproval of global powers’ “formula after formula to reconcile imperial interests” and advocated for Arab independence from the West.[2] Malik promoted Lebanon and the rest of the Near East’s autonomy through his fight for human rights and fundamental freedoms of conscience, reason, and liberal expression. One of his most celebrated contributions to this cause was the adoption of the UN’s Declaration of Human Rights when he did not hesitate to vocalize the importance of the rightful hegemony of Cradle countries from external interference.

Malik did not believe in the UN as a replacement authority to fill the vacuum of power within the Post-WWII Cradle of Civilization, rather as the premier mechanism to display how humanity could fulfill its highest ideals. Instead, he looked to the West’s major thinkers and events as a blueprint, cultivating its highest ideas, such as natural rights from the Cradle’s Abrahamic faiths.

Yet much to Malik’s detriment, the British would return for Suez, France would come back for the Levant, the US would send arms to the Israelis, and even the Soviet Union would intervene on behalf of various regimes. Nevertheless, Malik still hoped that the Cradle could progress economically, socially, and politically without external interference.

According to Malik, the American-led West became a shell of what it once was in the name of countering communism. The West had a blueprint for multi-societal civilization to prosper under liberty. Still, it traded its core virtuous idea for short-term gains over lands that it had no legitimate claim to against a rival who also had no legitimate claim.

The West’s previously enlightened pursuit of reason, liberty, and progress is expelled in the apparent chase for oriental treasures in the name of power, profit, and geopolitical chess. The above quote, though written decades ago, can be applied today, perhaps even more appropriate. Yet what is most profound, as Malik would point out today, the Post-Cold War West, in search of another superpower foe, thought it could revamp a superpower region, a land which the scholar remarked as “eternal,” the Cradle of Civilization.

Malik’s fight for the right to a peaceful and prosperous life for the Near East is nowhere near its end. Humanity’s genesis from this exceptional region makes today’s Near East issues even more relevant to our daily lives. The West has enjoyed the Cradle’s food, dance, entertainment, and language for decades, romanticizing the unique aspects of its culture while ignoring its most crucial humanitarian issues, such as the genocide and banishment of minorities like the Assyrians.

As Malik would argue today, only when we realize that our connection to its thousands of years of war, migration, and progress lies deeper than the pursuit of superficialities such as power, natural resources, and profit will we realize the staunch impact that our passiveness wields on these pressing conflicts that ultimately affect us all? Charles Malik did not use the term “Cradle of Civilization” lightly, and it is up to us to vindicate its use.

[2] Malik, Charles. “The Near East: The Search for Truth.” Foreign Affairs Journal, January 1952.

Lora Karch is an independent analyst focusing on security, cultural, political, and economic issues in the Near East. She is passionate about human rights, religious minorities, and safeguarding the legacies of forgotten civilizations. She lives in Washington, D.C.