India-China Dispute on the Doklam Plateau 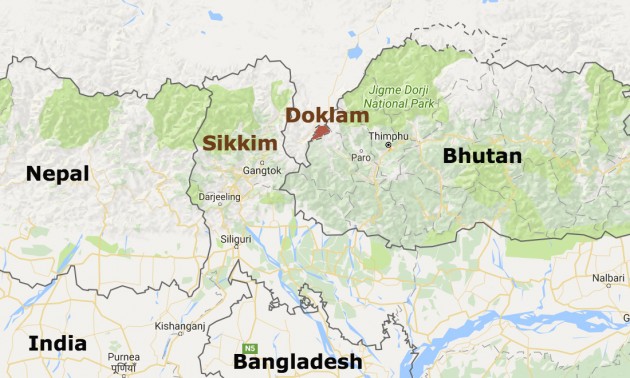 The location of the Doklam Plateau within the greater Himalayan region.
Share

The border dispute between China, India, and Bhutan on the Doklam Plateau carries on to be unresolved and seems to be escalating.

India has ignored China’s August 19 deadline for withdrawing Indian troops from the Doklam Plateau. Despite Chinese threats of ‘annihilation,’ the deadline has come and gone, raising questions about how this dispute will be resolved—or further escalate. Both parties, at the time of this briefing, have agreed to stand down their respective troops deployed along the Line of Actual Control. However, India and China have both made it clear that they are not relinquishing their respective claims, leaving the door open for heightened tensions down the road as this dispute continues to develop.

For nearly two months, China and India have been engaged in a tense standoff on the Doklam Plateau. Indian and Chinese troops are positioned just meters apart along the Line of Actual Control. The dispute began on June 16 when Indian forces physically prevented Chinese soldiers and construction workers from constructing a roadway through the Doka La mountain pass. India justified its actions by stating that Bhutan had requested Indian assistance, under the terms of a Bhutan-India treaty agreement. Bhutan claims the pass is within its internationally recognized territory on the tri-junction border it shares with China and India.

While India ignores the August deadline, China has warned citizens against traveling to India.

China’s August 19 deadline for Indian withdrawal from the plateau was a rarity. In issuing such a deadline, China has backed itself into a corner, a potentially embarrassing scenario for Chinese President Xi Jinping. It can either find a way to save face (domestically and internationally) by ending the dispute with India on mutually beneficial terms, or it can escalate the situation further.

The former option would be risky in that China risks looking weak, like a “paper tiger.” Conversely, the latter option would hurt China’s image abroad but would give China’s leaders the ability to play upon growing domestic nationalist sentiments. However, conflict is highly risky in that China would also risk economic disruption which would hinder its’ strategic political and economic interests.

The Chinese government claims that the tri-junction is actually several miles south of Doka La, therefore placing the pass within Chinese territory.  China’s actions in the area are seen as a threat by India due to close proximity of Chinese troops and development projects to the Siliguri corridor, which narrowly connects India’s remote north-western territory to the Indian mainland. Maintaining sovereignty over the Siliguri corridor is a geostrategic priority for India; an incursion would cut off any connection between India proper and the Indian northwest.

On August 9, the Chinese government claimed that Bhutan’s government told Beijing through diplomatic channels that Bhutan doesn’t regard the Doklam standoff as being within Bhutanese territory. However, Bhutan refutes the Chinese claim and reiterated that the Bhutanese position is that Chinese actions violate existing agreements.

In an effort to craft an alternative narrative where Bhutan recognizes the Doklam Plateau as belonging to China, not Bhutan, Chinese state media has routinely insisted that Bhutan and China have no dispute. China also reportedly has been using disinformation campaigns and psychological warfare tactics against Indian targets to intimidate troops and manipulate public opinion.

Troop Deployments and Military Exercises on the Doklam Plateau

India’s armed forces do not plan for additional troop deployments to the plateau, as their intent is to deter China while avoiding an escalation in tensions. However, India’s military command has moved its forces into a state of “No war, no peace,” a state of alert where soldiers take up pre-determined positions in the event of a conflict.

The Indian Army also conducted its planned Operational Alert training exercise early. Originally planned for later in September or October, the Operational Alert exercise began in early August. It was designed to acclimate troops to operating high altitude, while showcasing the battle readiness and deployment of Indian troops, without provoking Chinese soldiers stationed just meters across the border.

The Doklam standoff could have domestic political consequences, particularly in China.  The Communist Party’s 19th Congress will convene in November. President Xi Jinping expected to further consolidate his power during the Congress.

But, if Xi’s political credibility is damaged due to perceived weakness, his political future will be in jeopardy, as would the legitimacy of the communist party he has structured around him. Alternatively, Chinese political discourse may alter in the aftermath of the conference, allowing the Chinese military to withdraw troops without running afoul of the more disruptive, nationalist voices within the country.