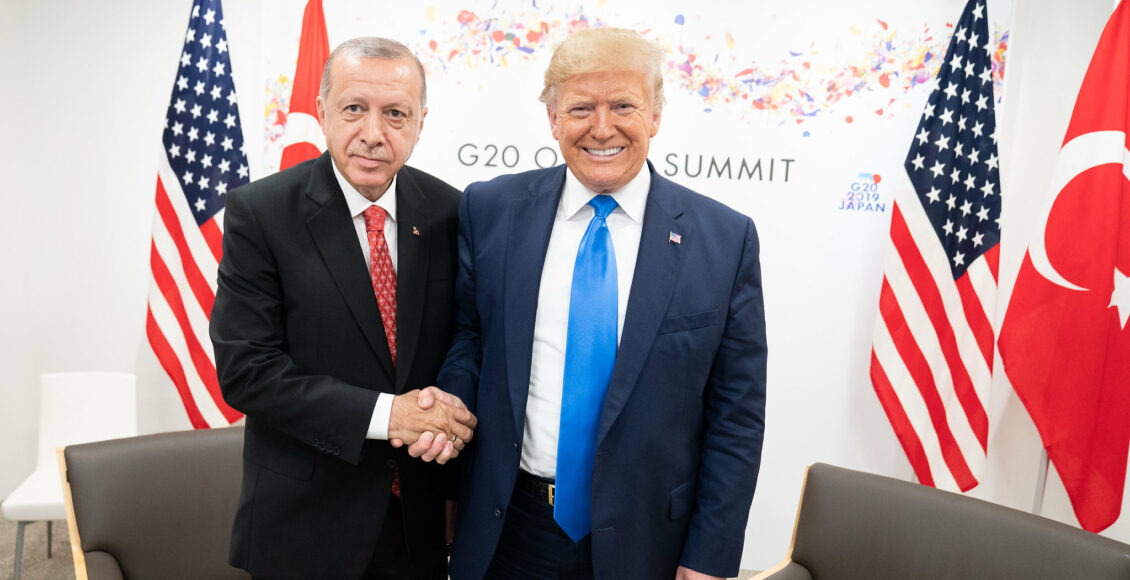 Illegal oil drilling, Russian influence, and an entente of unlikely powers in the Eastern Mediterranean leave the U.S. with many questions.

“We have already drilled two wells in waters to the east and west of the island of Cyprus, and the [ship] Yavuz will be drilling our third well. Such activities will continue with determination,” Turkish Energy Minister Fatih Donmez recently said at the Turkey Energy Summit.

Current drilling by Turkish President Recep Tayyip Erdoğan’s government has provoked a wide array of actors in the Eastern Mediterranean including Israel and Egypt, both U.S. allies. Illegal Turkish drilling vessels in Cyprus’ Exclusive Economic Zone (EEZ) are even accompanied by military vessels. The activity has many in Nicosia and abroad worried as international oil companies have major stakes in the region since the discoveries of hydrocarbons off of the Cypriot coast several years ago.

Why is the Eastern Mediterranean so vital to the world economy? The U.S. Geological Survey believes 122 trillion cubic feet of gas is in the area, however, the exact potential for gargantuan wealth to be found is yet to be confirmed. The area contains a vast amount of potential energy for Europe, which is heavily reliant on imported gas. This is especially true for the EU’s dependence on imported gas from Russia, the world’s second-largest exporter with a roughly 18.6% share of global production. European energy needs are extremely crucial for the global economy, and, of course, the President of the United States, as he is using the message of U.S. economic growth and record-level fossil fuel production as a foundation for his 2020 campaign.

Meanwhile, since the discovery of hydrocarbon reserves in the Eastern Mediterranean, states that once held no close ties with one another are now actively working together to maintain regional security. For the past decade, Greece, Cyprus, and Israel engaged in trilateral talks on energy cooperation for electricity and oil (catching the attention of communities at home, an inspiration for the creation of a “Hellenic-Israeli Alliance” in the U.S. Congress). Gas pipelines are currently under development and will reach into Europe via the Greek mainland.

The “Energy Triad” made progress with neighboring Egypt as well. In fact, Israel has begun exporting gas to Egypt as obstacles impeding cooperation are removed while Cyprus announced a strengthening of ties with Egypt through economy and tourism. Egyptian President Abdel Fattah Al-Sisi also seeks to strengthen and modernize Egypt’s navy in response to the threat posed by Turkey in the region to protect the country’s growing Mediterranean and Red Sea oil and natural gas interests.

“Countries that were once not talking are now coming together”, said Georgios Lakkotrypis, Cypriot Minister of Energy and Commerce in a recent interview. Talks between the four have brought Italy, Jordan, and even the Palestinian Authority to the table.

The restructuring of alliances to hedge against Turkey is similar to the unofficial anti-China coalition forming in the South China Sea, as powers are converging against Beijing—so are Mediterranean powers against Ankara. Yet Moscow has emerged as another major player in the Mediterranean. Russian President Vladimir Putin has not only been instrumental in the aid of Syrian President Bashir Al Assad’s government but also recently sold the S-400 missile system to America’s NATO ally, Turkey. Congress then barred Turkey from acquiring the American F-35 fighter as punishment—further straining Turkey’s relations with the West and undermining its reliability as an ardent partner in the Middle East.

Meanwhile, since the Greek-led 1974 coup d’état in Cyprus and subsequent Turkish invasion, the island has been divided, with Turkish forces illegally occupying the north while the internationally recognized government of Cyprus controls the south. With no military except for a small defense force, outfitted with small patrol boats and anti-tank weapons from the former Soviet Union and Yugoslavia, the Cypriot government is essentially defenseless. But Russian influence in the region is further complicated by Cyprus’ decision to actively hold Russian money, leading to skepticism regarding the inclusion of Cyprus into the American sphere. However, a recent U.S. Congressional delegation announced that the Cypriot government is working to terminate the laundering boogeyman head-on.

What are the options for President Trump with an increasingly aggressive Turkey and a resurgent Russia in the region—as an entente of economic and military cooperation forms in the Eastern Mediterranean?

John Gay, Executive Director of the John Quincy Adams Society, a nonpartisan Washington, D.C. based organization whose stated aim is to steer foreign policy conversation in direction of “More strategy. Less war”, takes the issue of Turkish self-interest back to the President’s administration:

“Trump has rightly pointed out that many U.S. allies do not do much to defend themselves, instead preferring to rely on the United States to defend them. The best way out of this is for those allies to become more capable of defending themselves. This has a twofold benefit for the United States: first, they do more (or all) of the fighting; second, they have a stronger interest in their own survival and well-being than we do, so they can make more credible commitments and threats against those that endanger them than we can make on their behalf. That’s especially true with a state like Cyprus since we don’t have a formal alliance commitment to them. If we believe a strong, independent Cyprus offers benefits to U.S. security, letting them buy our weapons is a way to get that on the cheap.”

The first option for the President is to make arms and modern radar systems available for Cypriot purchase to improve the country’s defensive capabilities, including but not limited to: short- and medium-range artillery, guided anti-tank missiles, and surface-to-air missile technology. At present, Cyprus remains barred from purchasing weapons from the U.S. A bipartisan bill to lift the Cyprus arms prohibition, co-sponsored by U.S. Senators Bob Menendez (D-NJ) and Marco Rubio (R-FL), failed to make it out of the Senate.

However, within the new National Defense Authorization Act for Fiscal Year 2020, Section 1270I, the prohibition can be lifted so long as one major obstacle is overcome: Russia (See: Section 1270I, e, 1, a and b). For Cyprus to receive arms from the U.S., it must first cooperate with Washington to counter Russian money laundering in Cypriot banks and terminate any refueling of Russian naval vessels that frequent the island on Eastern Mediterranean patrols.

The President may waive these requirements for one year if he chooses (See: Section 1270I e, 2). Arming Cyprus could be an effective way to apply pressure to a NATO ally pursuing objectives contrary to the interests of the United States.

Another option for President Trump is to reduce, block, or obfuscate Turkey’s role in NATO. Erdoğan values its membership in NATO, but Turkey’s membership is only one means to arm and defend itself (as the case was made when they purchased weapons from Russia). President Emmanuel Macron of France has already vehemently condemned Ankara’s actions in the Cypriot EEZ and recently dispatched French naval forces to deter further Turkish actions in the area.

While European Council President Donald Tusk recently affirmed that “the European Union stands united behind the Republic of Cyprus and expects Turkey to respect sovereign rights of the member states,” the situation is further complicated by Erdoğan’s cooperation in certain areas, such as participating in the Defeat ISIS Coalition. “Turkey opened its military bases to the United States and Coalition partners in July 2015. Since that time, Incirlik Air Base has been critical in the effort to degrade and ultimately destroy ISIS in Syria and Iraq,” the U.S. State Department said earlier this year.

However, taking action against Ankara may backfire, Turkey could pivot even further towards Moscow and Tehran. The three have already met to discuss the future of Syria without the consultation of the United States. Estranging Turkey from NATO cooperation could ultimately backfire as the U.S. could lose an ally for its future Eurasian interests.

The final, most immediate, and detrimental action against Turkey is economic sanctions—a move that may further exacerbate the state of Western-Turkish relations. Turkey is very dependent on foreign investor influence, especially Germany. Trade between the EU and Turkey is valued at approximately $220 billion. U.S. trade with Turkey is worth some $24 billion. While European and American political parties may be easy to jump to economic retaliatory means, they must also remember Erdoğan’s trump card.

The Turkish president has publicly stated that if Western powers take action against him, he will retaliate by sending over 3.6 million Syrian refugees to Europe. The Turkish economy has already felt a considerable impact with the recent devaluation of the Lira and, theoretically could save a significant amount of money by sending refugees to Europe if hit by further economic hardship (although Europe, and possibly the U.S., would almost certainly retaliate to impose further economic costs on Turkey).

President Trump must make a decision along with the support of lawmakers and the Pentagon that will uphold international law and standards on illegal economic activities by entities of one state in the EEZ of another sovereign state. Turkey’s illegal oil drilling shows no signs of abating in a region vital to the global economy and crucial to U.S. geopolitical interests.

Jack Dulgarian is an independent analyst focusing on security, cultural, political, and economic issues in Eastern Europe and the Near East. He has worked in the defense industry, Capitol Hill, and a refugee humanitarian foundation based out of Athens, Greece.