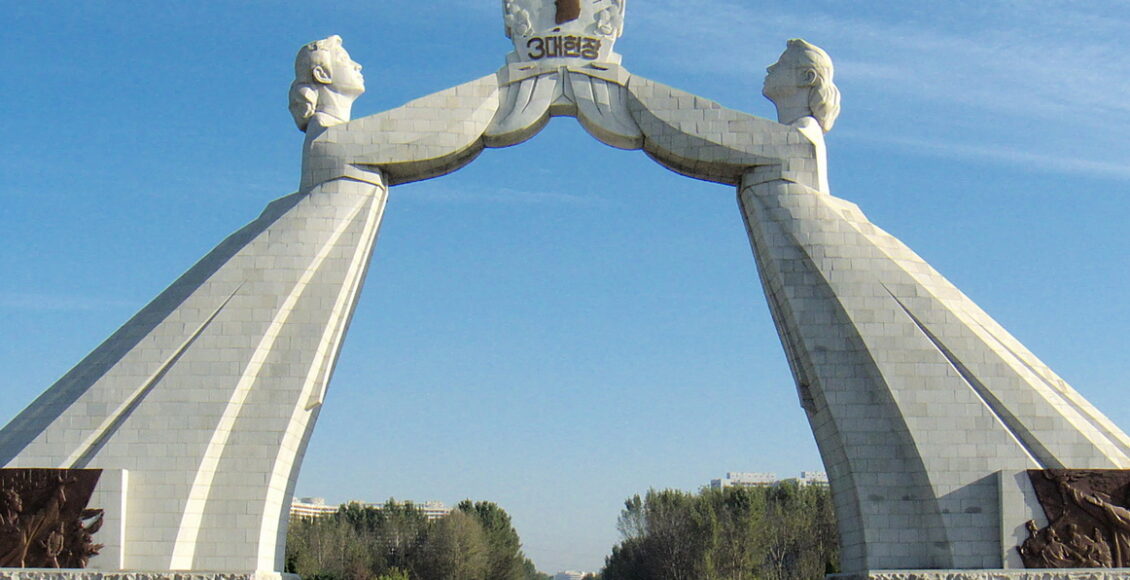 Monument to Three Charters for National Reunification in Pyongyang
Share

A few days later, the South Korean government reported that Kim had promised to give up his nuclear arsenal under certain conditions.

While some viewed the summit with skepticism and issued reminders about Kim’s villainous past, others began talking of a unified Korea – a reasonable reaction considering that the leaders signed a document called the Panmunjom Declaration for Peace, Prosperity, and Unification of the Korean Peninsula.

The intentions of these two leaders are key. While Donald Trump and Xi Jinping and Vladimir Putin may tweet and hold meetings, it is the nearly 80 million Koreans who will determine the future of how they will share their peninsula.

As scholars who study Japan, Korea, and East Asia, we know that the “Cold War” has always been “hot” in Asia. That’s why we suggest the focus now should be on forging new ties with North Korea. The question of how South Korea and North Korea will merge can be left for the future.

To understand why it’s helpful to remember why Korea was split into two countries in the first place.

In August 1945, in the basement of the State Department in Washington, D.C., two American army officers traced a line across a National Geographic map and divided the Korean peninsula – at the time colonized by Japan – at the 38th parallel.

This division was part of an Allied vision of Japan’s impending defeat.

Many – especially the Russians – had anticipated that Japan would be divided like Germany.

After all, it was Japan, not occupied Korea, who was the enemy combatant. Yet the Soviets acquiesced to the American idea.

Ideological camps among Koreans that had taken root under Japanese oppression challenged one another for expression in the following months. Eventually, the communists gained leadership in the North and their challengers in the South.

Five years later the Korean War erupted to claim the lives of one in eight Koreans. Tens of thousands of international participants would also die in what history books flatly name the first major conflict of the Cold War.

The 1953 armistice ending the fighting in Korea more or less followed the 1945 line. Under this agreement, Koreans who had collaborated, resisted or simply endured Japanese rule prior to the Korean War (1950-1953) now found themselves assigned entirely new identities: “North Korean” and “South Korean.” The meaning of these names has diverged and morphed into new realities on both sides since then.

The view from South Korea

In South Korea, people often refer to the Korean War as yugio – literally 6.25 – referring to June 25, 1950, when the grandfather of today’s North Korean leader ordered his troops to cross the border and attack the South. This state-sanctioned narrative reinforces an antagonistic relationship. The North is framed as the aggressor, the South as an innocent victim, and the U.S. and the West as the savior of South Korea. Not unimportantly, North Koreans call the same history “The Fatherland Liberation War.”

While the 2015 Asan Report finds that more than 80 percent of South Koreans “dutifully” answer that Korea should be reunified, fewer than 20 percent support immediate reunification. Their sense of an ethnic bond is decreasing, and reunification is mostly seen as an economic burden.

In 2010, former president Lee Myung-bak proposed a “reunification tax” to support the costs of reunification, whenever it came. The tax proposal received little support from the public or among politicians, especially after the North’s attack on a South Korean warship Cheonan and the shelling of the South’s Yeonpyeong Island later that year. Speaking in 2014, former President Park Geun-hye also tried to promote a positive image of reunification, calling it a “jackpot” (daebak).

She claimed that reunification – a combination of North Korean labor and South Korean technological advancements – would create jobs and strengthen the Korean economy.

Despite government’s effort to reposition the reunification issue, public opinion data show that South Korean youth are only increasing their detachment from North Korea.

So, if an older generation’s understanding of reunification is a hard sell, what is the path forward?

South Korea could instead seek a peaceful coexistence of two Koreas with free trade, free exchange of people and no military threats. Perhaps public support for reunification may reemerge and strengthen as ties are strengthened through increased exchanges at the civil level and greater economic independence in the North, thereby lowering the “costs of reunification.”

One of the main reasons there has not yet been a resolution to the “North Korea problem” has been persistent, divergent dreams of reunification. For the U.S. and South Korea, a reunified Korea would be a liberal, capitalist democracy. For North Korea, China, and Russia, a reunified Korea would not be a close ally of the United States and certainly would not host U.S. troops.

Over the last 30 years, the benefits of a divided Korea have only increased for those outside the peninsula. Initially, North Korea served as an important “buffer state” between the communist China and Russia to the north and the democratic and capitalist countries of South Korea, Japan – and their ally, the United States. Even after the Cold War ended, ideological differences among these important geopolitical players has continued, reinforcing the benefits of North Korea’s liminal status.

If we can follow public opinion in South Korea and temporarily abandon the dream of a single Korea, it is possible to see that everyone would benefit from a peaceful, prosperous, nonnuclear North Korea. China’s economic success has demonstrated that a country can take advantage of markets without becoming a capitalist democracy. It can offer North Korea guidance on how to develop using the Chinese model.

If neighboring countries opened up their markets to trade and offered targeted foreign direct investment, North Korea can experience the kind of economic miracle that Japan, South Korea, and China have already enjoyed.

If the United States and its allies can offer security guarantees to North Korea, it should not need to hold onto its deadly nuclear weapons.

If North Korea can recognize that it is in everyone’s interest that North Korea not only continues to exist but becomes more prosperous, then perhaps Kim Jung Un will make good on his promise to let go of his nuclear ambitions.

Once North Korea is more economically independent, maybe reunification can be conducted as a joyful reunion between equals. That day is far in the future, however. In the present, powerful negotiators must find the skill to chart a path toward peace and prosperity for North Korea. If they can manage it, they will have left a great legacy to the world.

Professor at the University of Connecticut

Professor at Wesleyan University
Thanks for signing up! Please check your inbox for an email confirming your subscription.
Via The Conversation
ChinaJapanNorth KoreaRussiaSouth KoreaUnited States
Share
You might also like
Energy