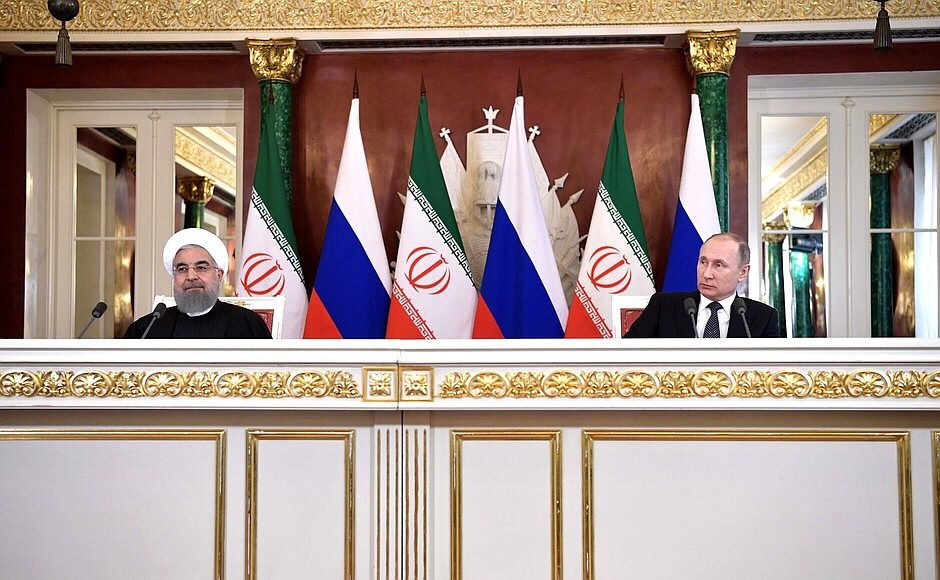 The U.S. withdrawal from the Iran nuclear deal sets in motion a complex power play that introduces new risks for global oil markets.

It is often said, perhaps with some hyperbole, that Iran’s nuclear deal with world powers was the best hope for conflict resolution in the Middle East. Its architect John Kerry argues instead that the 2015 deal’s limited parameter of closing Iran’s pathway to a nuclear weapon is sufficient on the merits. The Trump administration is taking a different view, focusing on Iran’s escalating threats to U.S. allies Israel, Saudi Arabia, and the United Arab Emirates. Those threats, which have included missile, drone, and cyberattacks on Saudi oil facilities, are looming large over the global economy because they are squarely influencing the volatility of the price of oil. One could argue that the U.S. decision to withdraw from the Iranian deal, referred to as the Joint Comprehensive Plan of Action (JCPOA), has injected an even higher degree of risk into oil markets, where traders now feel that the chances of Mideast conflict resolution are lower.

But, the Trump administration could argue otherwise. From its perspective, the United States extended to Iran $6 billion in frozen funds, opened the door for a flood of spare parts to be shipped into Iran’s suffering oil and petrochemical sector, and looked the other way while European companies rushed in for commercial deals. In exchange, it’s true, Iran began to implement the terms of JCPOA, but as Secretary of State Pompeo laid out in a major speech on the subject, the nuclear deal has failed to turn down the heat on the wide range of conflicts plaguing the Mideast region.

Rather, Secretary Pompeo explained, Iran’s proxies have raised the stakes for U.S. allies, and regional conflicts have been dangerously escalating. U.S.-Iranian exchanges in Syria are also on the rise. The deal could still move forward, according to Secretary Pompeo, but not until Tehran addresses a laundry list of U.S. demands. Washington expects its action and rhetoric to spur more productive negotiations that would allow the United States to link restoring the nuclear deal with political negotiations to de-escalate conflicts. Since re-imposition of renewed oil sanctions doesn’t take hold for several months, wiggle room still exists for such diplomacy. But markets reflect doubt about those chances, reflecting the view of many respected commentators. Oil prices hit $80 a barrel and even the five-year forward oil price rose above $60 for the first time since the end of 2015. Speculators are still holding substantial long positions and industry has been slower to hedge, lest oil prices go higher still.

In the world of oil, it’s hard to compartmentalize complex geopolitical conflicts. In condemning the Trump administration’s move, Iran’s hardliners actually accused the United States of withdrawing from the JCPOA to raise the price of oil and called on the Organization of Petroleum Exporting Countries (OPEC) to raise its production to resist the United States. In a tweet from the Iranian Oil ministry via @VezaratNaft on May 11, Iranian oil minister Bijan Namdar Zangemeh is quoted as saying “President Trump playing double game in oil market. Some OPEC members playing into U.S. hands. U.S. seeking to boost shale oil production.” Simultaneously, Iranian media promulgated a spurious rumor that Saudi leader Crown Prince Mohammed bin Salman had been assassinated. The context for both was dialogue between the United States and its regional Arab allies (kicked off by a Trumpian tweet on OPEC) on the need to cool off the overheated oil market with higher oil production to ensure that the re-imposition of sanctions did not destabilize markets further.

In seeking “better terms” for the Iranian nuclear deal, the Trump administration is counting on the fact that the Iranian government faces more internal opposition from its population than it did when the deal was negotiated back in 2015. That popular discontent is palpable and explains why the Iranian rhetorical response to the U.S. withdrawal announcement has been relatively mild compared to historical precedents. But this is no cakewalk, since Iran is counting on Europe and other major trading partners to resist U.S. sanction efforts.

In recent years, China has established its own networks of financial channels and institutions that could be used to allow Chinese companies to pay Iran in its currency, the yuan, in a manner that avoids the Brussels-based SWIFT financial messaging system, which can be subject to U.S. tracking and intervention. China has already tested using the yuan to pay for imports from Russia and Iran via China National Petroleum Corporation’s Bank of Kunlun. The Tehran-based business daily The Financial Tribune suggested that other countries, including Europe, could tap “alternative Chinese financial networks.” But the practicalities of China taking the lead on behalf of Tehran when other U.S.-China bilateral trade issues loom large is more complicated now than it was back in 2012. In 2012, China agreed to meet the Obama administration’s request that it cut its Iranian imports by the minimum 20 percent. As robust a response as the United States may now say it wants from Beijing on Iran, Washington similarly has to consider other priorities on the table with China right now, including negotiations regarding North Korea.

Iran has been exporting roughly two million barrels a day (b/d) of crude oil. Europe purchases over a quarter of that volume and is—if push comes to shove—likely to go along with U.S. policy if no diplomatic progress can be made. For now, European leaders are trying diplomacy to keep the nuclear deal alive separately from the United States and to press Iran to address some of the common concerns on Secretary Pompeo’s list. Back in 2012, Europe cut virtually all of its oil imports from Iran. Japan had already conservatively lowered its purchases from Iran in March and even India’s oil giant IOC is now saying publicly that it is looking for alternative barrels to replace its 140,000 b/d of purchases from Iran, suggesting the oil will be made available to India from Saudi Arabia. South Korea is also expected to wind down its purchases from Iran given the imperative to display common ground with the United States; Seoul has already reduced purchases from 360,000 b/d last year to 300,000 b/d more recently. In sum, although Iran can conduct oil for goods barters with Russia and Turkey, it could potentially lose one million b/d of sales or more, if it the current geopolitical stalemate stands.

But more is at stake for Iran than short run oil sales since Tehran has learned it can get those back eventually if the political will towards sanctions wears off over time. The curtailment again of international investment in its natural gas industry is a bigger setback for Tehran, which needs natural gas not only to inject into its oil fields to drive production but also for residential and commercial use. If the United States manages to drive French firm Total back out of the important South Pars natural gas venture, the chances of Iran reestablishing itself as a major liquefied natural gas (LNG) exporter dissipates once again, possibly this time for decades given potential U.S. exports and other market conditions. China, which is also an investor in South Pars, does not have experience developing LNG exporting projects. Unfortunately, the global natural gas stakes could make it harder to draw Russia along with any U.S.-led conflict resolution effort. Even if Tehran was willing to cooperate in Syria or Yemen, Russia—a major natural gas exporter to Europe and Asia—benefits from U.S. sanctions that block competition from Iranian exports. Motivating the Kremlin into any diplomatic deal that restores U.S.-Iranian cooperation could be a heavy lift.

Russia is expected to begin supplying natural gas by pipeline to China via the Power of Siberia pipeline by late 2019 but Russia’s Gazprom has had difficulty locking down sales to China from additional pipeline routes. Successful negotiations on the Korean peninsula could help in that regard, since one potential fix to North Korea’s energy needs could be a Russian gas peace pipe. But the availability of direct natural gas exports to China and South Korea from the United States muddies the waters further.

Beyond holding Iran out of the long run natural gas market, Russia could similarly be unwilling to agree to conflict resolution in Yemen and Syria because of the benefit it enjoys from keeping Saudi Arabia under financial and political pressure. Riyadh’s economic pressures, driven in part from its high military spending in Yemen, have made Saudi Arabia all the more willing to collaborate with Moscow on managing oil markets—a geopolitical reality that has strengthened Russia’s global standing significantly. It’s hard to see what would motivate the Kremlin to let Saudi Arabia off the hook given that a resumption of a tight alliance with Washington and Qatar is a material danger to Russia’s geopolitical and economic well-being, as demonstrated when the three countries collaborated in the early 2010s to weaken Moscow’s grip on European energy markets.

Russia’s posture is not the only barrier, however, to conditions that would allow progress on U.S.-Iranian conflict resolution. Even if the economic penalty of the re-imposition of U.S. sanctions were sufficient to motivate Iran back to the negotiating table, it remains unclear to what extent Tehran can influence its own proxies who have independent goals that could not align fully with any conflict resolution deal Iran could strike with the United States and its allies. Moreover, it is similarly unclear whether the United States could draw Saudi Arabia into a workable political settlement for Yemen. Thus, while the United States could have a strategy in mind that could improve upon the status quo in the Middle East, a deeper dive into the energy realpolitik of the matter shows the complexities that stand in the way of progress. With so much at stake, an incredibly disciplined and patient hand will be necessary to work through the wide host of internecine, interconnected issues.

David M. Rubenstein senior fellow for energy and the environment and director of the Energy Security and Climate Change program at the Council on Foreign Relations
Thanks for signing up! Please check your inbox for an email confirming your subscription.
Via The Council on Foreign Relations
ChinaEuropean UnionIranRussiaSaudi ArabiaUnited States
Share
You might also like
Defense & Security