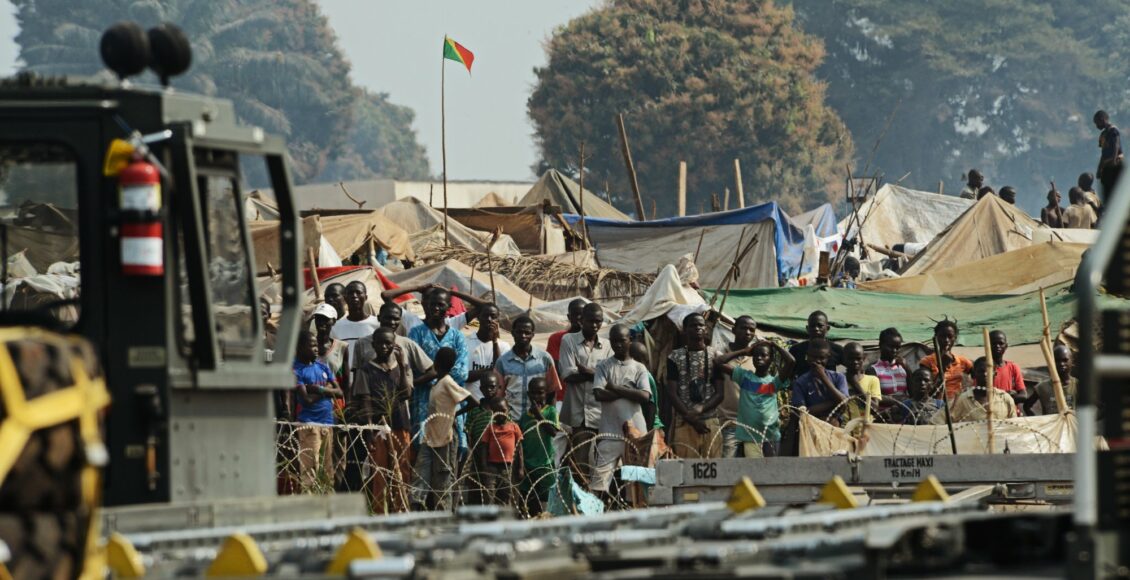 Refugees from the Central African Republic observe as Rwandan troops arrive to fight rebels in the country.
Share

Following the decolonization of Africa in the 1960s and 1970s, African governments decided against redrawing arbitrary national borders that were created by European powers. In many states, this decision gave rise to political, ethnic, and religious violence for the latter half of the 20th century. The Central African Republic (CAR) is one such state, having wavered in and out of conflict since its independence from France in 1960.

The CAR’s population is primarily split between into two regions: most of the country’s minority Muslim population inhabits the Sahel, while the majority Christian community is located mainly in the savanna. The present conflict between both groups erupted in 2012 and continues today. The conflict was ignited when Muslim rebels of the Seleka group seized power from the Christians. In response, Christians formed the anti-Balaka faction. Since 2012, government forces have become involved, leading to a number of severe humanitarian crises that threaten to destabilize the country further.

In 2013, then-Secretary-General of the United Nations Ban Ki-Moon stated that the Central African Republic had experienced a “total breakdown of law and order” that threatened both its security and stability and that of its neighbors. While government forces remain in control of the capital of Bangui, armed groups have taken over 70 percent of the country, subjecting civilians to regular attacks. The nature of the conflict has heightened ethnic tensions, as hundreds of localized groups beyond the Seleka and anti-Balaka factions taking control of territory throughout the CAR.

Fighting between the two rival groups and government forces has made life difficult for civilians, who are increasingly fearful of leaving their homes or allowing their children to attend school. The conflict in the CAR is at a tipping point and threatens to push the country into a state of famine. Peacekeeping and mediation efforts have stagnated, making it essential to promote an alternative approach to providing conflict resolution and humanitarian assistance in the CAR. Intervening organizations must engage at the community level to stem the flow of fighters entering the conflict.

Conflict at the Community Level

The violence in the Central African Republic has affected communities large and small. Towns and villages have been destroyed as young men are increasingly attracted by the possibility of income from joining a militia. Political disruption, violence, and a weak economy have perpetuated a lack of adequate medical services, hindered internal migration, and prevented communities from modernizing necessary infrastructure. Disease is nothing new to the CAR, but the conflict has exacerbated the inaccessibility of healthcare leading to increased mortality rates.

As violence spreads, higher numbers of CAR citizens have been forced to flee to refugee camps. As of 2018, the U.S. Central Intelligence Agency estimated that almost 550,000 individuals had been internally displaced. The conditions in these refugee camps are less than adequate. In regular communities, access to medical facilities is limited, and transit to and from first aid areas is minimal. However, individuals in refugee camps are faced with “little or no humanitarian assistance,” and are often left to fend for themselves.

The Evolution of Humanitarian Issues in CAR

As of 2018, half of the CAR’s population requires humanitarian aid, more than two million people. The CAR is mostly comprised of rural communities that lack access to medical facilities or basic first aid, the capital of Bangui, for example, has just one major hospital. According to the CIA, many suffer from treatable diseases, such as malaria or malnutrition, due to a weak healthcare system exacerbated by violent conflict. With a poor transit system destroyed by a conflict that makes it difficult for rural residents to travel for medical care, mortality rates remain high. Even if they can make it to a medical facility, those who suffer life-altering injuries resulting from the conflict are often unable to afford medical services and pharmaceuticals.

The ongoing conflict has weakened the country’s economy, leaving 75 percent of the population impoverished. Attacks at a local level have increased, which have primarily come in the form of violent attacks on refugee sites and on educational and healthcare facilities. Growing numbers of internally displaced peoples has made it challenging to provide clean water at refugee camps, and obstacles to trade and farming have inflated the prices of food and other essentials.

Humanitarian aid groups face difficulties in their attempts to assist the affected population. Threatened with violence and robberies, the movement of humanitarian groups within the CAR has been limited. As of September 2018, seven of these groups have withdrawn their services from the nation.

A Solution Starts at the Local Level

To decrease the attractiveness of joining armed groups, there is a need for solutions at the community level to improve economic and living conditions. As shown by the largely ineffective peacekeeping missions in the region, external mediation with the government and militias has been difficult.

A focused and localized approach within the CAR’s communities could have a more lasting effect, providing other outlets for civilians while stemming the flow of new militia recruits. As such, there are five recommendations to engender an improved situation in the country:

Protecting the Hazara People of Afghanistan is a Moral…

Humanity on the Move: Migration in the Age of Walls and…

The Price of Inequality: The Dangerous Rural-Urban Divide in…

Recently, a number of peace agreements and non-aggression pacts at a local level have had a stronger effect on reducing violent conflict within rural communities. These peace deals bring prominent community actors and organizations together, including women’s organizations, religious leaders, and local government authorities, to mediate peace offers between rival groups.

2. Address the conflict’s religious and ethnic characteristics at the source

To prevent the conflict from strengthening at the national level, it is critical to address the issues at the core of the conflict at the local level. That means promoting tolerance in communities and helping local religious leaders and other respected leaders to influence their communities to pursue reconciliation. Since the conflict in CAR is of a religious nature, it is imperative to intervene with education for youth so as not to perpetuate divisions between ethnic and religious groups.

Young men in the CAR are the most likely to impede future peace agreements between rival groups. Thus, it necessary to provide alternative outlets for these individuals to prevent them from perpetuating the conflict at the national level. To keep them from joining armed groups, local groups and international mediators will need to create and provide new forms of employment in numerous communities. This is already happening in a number of CAR’s communities, but it is essential to expand these practices across the nation.

Currently, many work projects “involve restoring public goods, including schools, clinics, bridges, roads, as well as churches as mosques,” according to a piece published by Foreign Policy. The benefit of this is not only to make potential militia fighters unavailable while rebuilding the country’s infrastructure but to provide tangible skills and training in community roles that can develop into careers and boost both local and national economies. With the potential for a job, young men are provided with other income options that make joining militias less attractive.

4. Invest in technology and medical facilities in rural areas

Technology will bridge the equality gap between the people of cities and rural communities and will distribute vital information to rural dwellers who have little access to resources on politics and economics.

Rural communities desperately need access to medical facilities, especially with the spread of disease in areas hospitable to insects like tsetse flies and mosquitoes. This requires the creation of new medical facilities and improved transportation and communications infrastructure.

5. Crackdown on the sale of weapons

National and local governments must impose stricter regulations on the transfer of military-grade weaponry throughout the CAR. These weapons often end up in the hands of local rebels, who incite violence in communities, further exacerbating the conflict. To limit these sales, it is essential to shut down the black markets that distribute weapons to rebels.

Looking to the Future

The situation in CAR will take time to resolve. Promoting tolerance at the local level while helping respected leaders to arrange reconciliation, promoting understanding, and helping respected leaders facilitate dialogue between rival groups. While international assistance is necessary, successful mediation will require a broader effort from community actors and CAR citizens to resolve this conflict at the grassroots level.

Thanks for signing up! Please check your inbox for an email confirming your subscription.
African UnionCentral African RepublicEuropean UnionUnited States
Share
You might also like
Energy