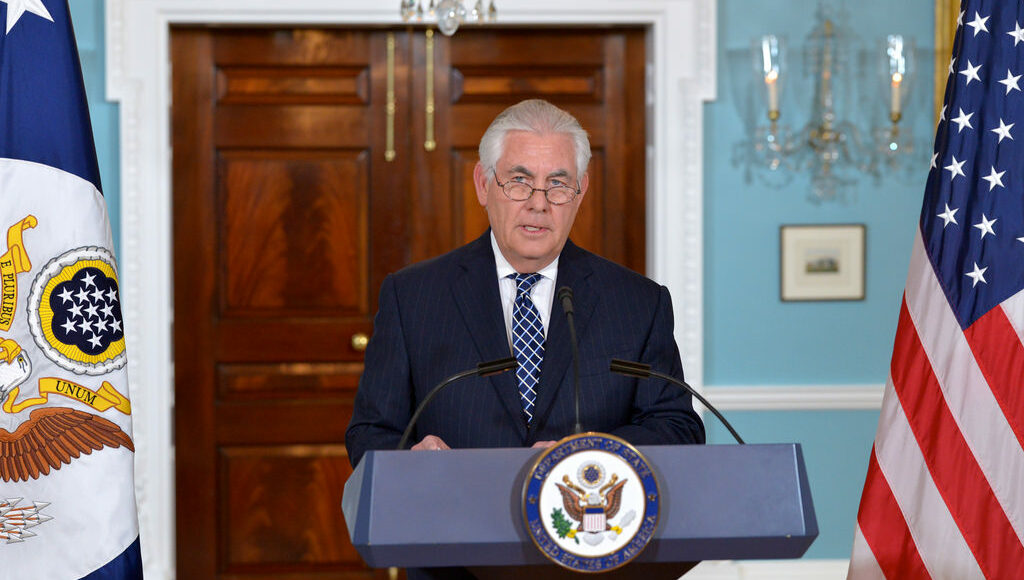 Secretary of State Rex Tillerson may have to resign by the beginning of 2018. A report published by the New York Times comes at a time when the relationship between Tillerson and U.S. President Donald Trump is increasingly strained.  White House officials were cited in a report detailing that a plan is being discussed to replace the current Secretary of State.

According to the New York Times, “The White House has developed a plan to force out Secretary of State Rex W. Tillerson, whose relationship with President Trump has been strained, and replace him with Mike Pompeo, the C.I.A. director, perhaps within the next several weeks, senior administration officials said on Thursday.” The report added,  “John F. Kelly, the White House chief of staff, developed the transition plan and has discussed it with other officials.”

On Thursday, President Trump responded to questions from reporters by saying, “He’s here. Rex is here.” White House Press Secretary Sarah Huckabee Sanders later rejected the reports in a statement: “There are no personnel announcements at this time.” Sanders added, “Secretary Tillerson continues to lead the State Department, and the entire cabinet is focused on completing this incredibly successful first year of President Trump’s administration.”

What’s the Potential Cause of Tillerson’s Ouster?

Tillerson and Trump diverge sharply when it comes to foreign policy.  The BBC’s Barbara Plett compared the two to ‘chalk and cheese in temperament and the way they work…Mr. Trump is also said to have complained that his secretary of state is too ‘establishment.’”

Their differences in foreign policy have repeatedly come to light. The Secretary of State has sought diplomatic engagement with North Korea but has repeatedly been rebuked by the President.  When Tillerson stated that back-channel engagements with the North Korean regimes had been established, Trump tweeted, “I told Rex Tillerson, our wonderful Secretary of State, that he is wasting his time trying to negotiate with Little Rocket Man.”

During the GCC crisis, President Trump apparently supported the Saudi-led bloc and said that the blockade against Qatar was “the beginning of the end to the horror of terrorism.” Conversely, Tillerson has issued statements warning about the humanitarian impact of the blockade and warned that the embargo against Qatar might adversely affect the fight against terrorism.

The New York Times later reported that “President Trump tweeted on Friday that reports he would soon fire Secretary of State Rex W. Tillerson were ‘fake news,’ and that ‘I call the final shots.’ The tweet came just hours after Mr. Tillerson called reports that the White House wants him to resign ‘laughable,’ even as one of his closest aides planned to leave the department.”