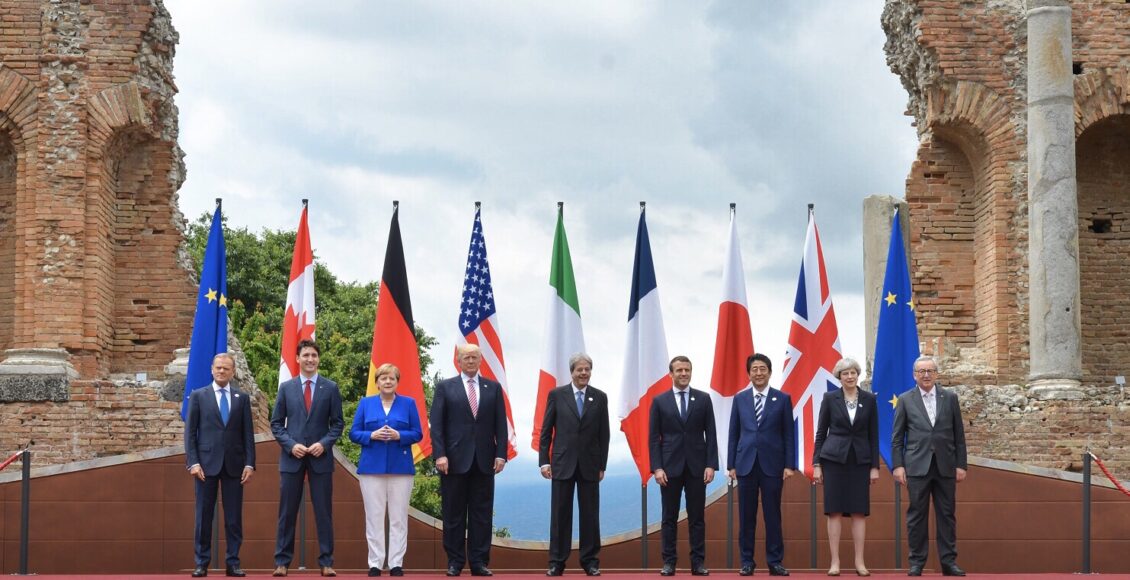 There’s no question that the post-Soviet world order is undergoing a seismic shift.

The real question is, how? The post-World War II international order that enabled today’s political, economic, and security arrangements and institutions is in question as power diffuses worldwide, shuffling seats at the table of global decision making.

Today, aspiring powers seek to adjust the rules of the international order and alter the global context in a way beneficial to their interests.

This complicates any reform of international institutions such as the UN Security Council or the Bretton-Woods institutions, also brings into question whether political, civil and human rights—hallmarks of liberal values and US leadership since 1945—will continue to be so.

Norms that were believed to be settled are increasingly threatened if present trends hold, and consensus to implement and follow standards can be difficult to build as Russia, China, and Iran seek to shape regions and international norms in their favor. Some features of the evolving global order are apparent:

Competition is on the increase as China and Russia seek to exert more considerable influence over their neighboring regions and encourage an order wherein US influence doesn’t dominate.

Although nations and organizations will continue to shape citizen anticipation about the future order, citizen and sub-national concerns will increasingly push states to the stage that international and domestic politics won’t be separable.

This may result in the near term in waning responsibilities to security concepts and human rights among several nations, even as many individuals and smaller groups advocate for ideas through platforms, venues, and institutions.

Authoritarian regimes are likely to reinterpret and manipulate human rights norms increasingly.  This may probably lead to decreasing consensus in the international arena on the extraterritorial obligations of nations, which might have implications for domestic societies and the resolution of humanitarian conflicts.

The norms and practices emerging around climate change—and their influence on global and state development policies—are the more than likely candidates for fostering a twenty-first-century set of universal principles.  Majorities in 40 nations, according to a poll by Pew, say that climate change is a significant issue, with a median of 54 percent saying it’s an issue.

The near-term likelihood of international competition leading to doubt and global disorder will stay raised as long as ad-hoc internationalism persists.

As dominant nations limit cooperation to a subset of issues while asserting their interests in regional matters, international norms and institutions are likely to hamper and the global system to fragment in favor of contested regional spheres of influence.

Governments and institutions will face considerable challenges over the next decade.

In the short-term, these global trends will increase the threat posed by all types of terrorism, and the ability for asymmetrically-powerful state and non-state actors to adversely affect the International order and the global balance of power.

Tensions are rising because citizens around the world are raising questions about the relationship that exists between governments and themselves.

The social contract that exists between society and their governments is unraveling as people demand increasing levels of security and prosperity. Globalization means that domestic conditions are shaped, to an ever-greater degree, by occurrences overseas.

Tensions between governing elites and their citizens are reshaping global geopolitics. Growing populism in the West threatens an international order governed by rule-of-law.

A weakened United States would mean less of an emphasis on human rights and would threaten the existence of a liberal global order. Less of a U.S. presence on the global stage—perceived or in actuality—creates gaps for authoritarian powers like China and Russia.

It also means a heightened risk of conflict arising between competing for regional powers like India and Pakistan, Iran and Saudi Arabia, or Iran and Israel. The status quo could be gradually or rapidly replaced by an international order comprised of competing spheres of influence.

In the wake of the 2016 Brexit vote and election of Donald Trump as U.S. president, many questions were raised about the long-term viability of a Western-led international order.

This perception, mainly by the Russians and the Chinese, substantially heighten the risk of increased instability in areas of persistent tensions like the Korean Peninsula.

While globalization has dramatically increased the degree of economic interdependence among the world’s major powers, this is not, in-and-of-itself, a guarantor of stability.

Countries like Russia are in perpetual search for ways to decrease their dependence on other major powers, reducing their vulnerability to economic pressures like sanctions and allowing them to pursue their national interests more aggressively.

As geopolitics trend from a unipolar order to an increasingly multipolar system, the threat from terrorism grows greater. This pattern, combined with proliferating technologies, disinformation (“fake news” propaganda), employment shortages, and demographic trends, means greater disorder on a global scale.

Thus, fundamental questions will be raised—and subsequently need to be resolved—about laws, institutions, and balance of power in the international order.

Beijing and Moscow will seek to lock in competitive advantages and endeavor to right what they perceive as historical wrongs before economic and demographics headwinds further slow their material progress and the West regains its foundation.

Both Beijing and Moscow maintain worldviews where they’re rightfully dominant in their regions and retain the right to mold regional geopolitics and economics to match their security, political, and economic interests.

China and Russia have moved aggressively in latest years to exert more considerable influence in their regions, to contest the US geopolitically, and also to force Washington to accept exclusionary regional spheres of influence—a situation that the US has historically opposed.

For instance, China views the continuing presence of the US Navy in the Western Pacific, the centrality of US alliances in the region, and US protection of Taiwan as obsolete and representative of the continuation of China’s “one hundred years of humiliation.”

Recent cooperation between China and Russia has been tactical and is likely to come back to competition if Beijing jeopardizes China’s dramatic growth has highlighted greater gaps between poor and rich.

Russian interests in Central Asia could be threatened as Beijing explores options for cheaper energy supplies beyond Russia. Furthermore, it isn’t clear whether there’s a mutually acceptable boundary between what Russia and China consider their natural spheres of influence. Both share an extensive—and historically contested—border, which could be a potential point of tension in the long-term.

Russian assertiveness will harden viewpoints in the Baltics along with other portions of Europe, escalating the potential risk of conflict.

Russia will seek, and sometimes feign, international cooperation, although openly challenging norms and rules it perceives as a counter to its interests and providing support for leaders of fellow “handled democracies” which promote resistance to American policies and personal tastes.

Moscow has little stake in the rules of the international economics and may be counted on to take actions that weaken the United States’ and European Union’s institutional advantages.

The Kremlin will test NATO and resolve, seeking to undermine Western authenticity; it will attempt to exploit splits between Europe’s both north and south and east and west, and also to drive a wedge between the US and the EU.

Likewise, Moscow will become more active in the Middle East and these areas of the world wherein it believes it can check US influence. Lastly, Russia will Stay dedicated to atomic weapons as a deterrent and as a counter to stronger conventional military forces, as well as it’s ticket to superpower status.

Russian military doctrine allegedly calls for the limited use of nuclear weapons in a situation where Russia’s vital interests are at stake to “de-escalate” a conflict by demonstrating that continued conventional conflict risks escalating the emergency to a large-scale nuclear exchange.

In the meantime, India’s growing economic power and profile in the region will further complicate its foreign policy calculations, as New Delhi navigates relations with Beijing, Moscow, and Washington to shield its expanding regional and global interests.

India and China will become increasingly competitive, both politically and militarily, as each seeks to maintain and advance their respective national interests.

The West: Regrouping or in Retreat?

Western governments will need to educate their voters on the importance of foreign policy and the role it plays in supporting domestic tranquility, rather than giving into xenophobic rhetoric and nativist policies to appease voters.

Liberal Western powers like France, Germany, and Japan are filling the void created by the newfound erratic and transactional rhetoric and behavior emanating from the executive branch of the United States government.

Newton’s third law—“for every action, there is an equal and opposite reaction”—applies to international relations as much as it pertains to physics.

An abrupt and sudden departure from the status quo by one actor will result in numerous responses by that actor’s allies, rivals, dependents, and institutions that will impede or exacerbate the impact of that action.