Trial by Fire: Guaidó Calls on Venezuela to Oust Maduro 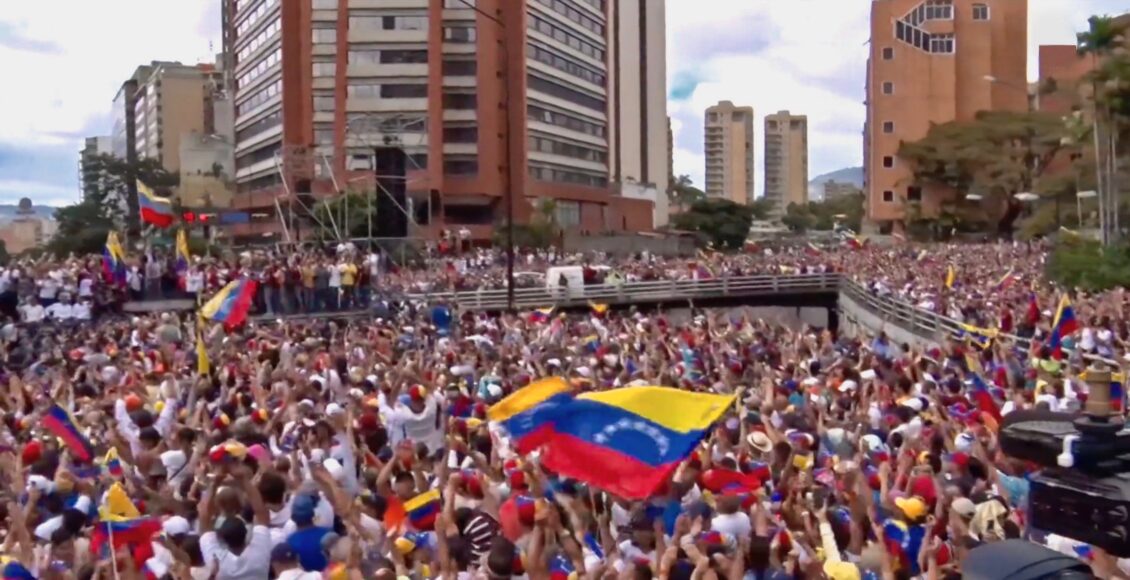 Venezuela kicked 2019 off with a turbulent and fragile political start of the year. President Nicolás Maduro began his second presidential term on January 10th. The May 20th presidential election last year was internationally decried as illegitimate by the United States and the 14-member Lima Group throughout the region. On January 5th, a new face in Venezuelan politics emerged, Juan Guaidó, the 35-year-old newly elected President of the National Assembly.

As public and military support continue to mount, Guaidó is preparing to challenge Maduro and has called for a change of power. At Guaidó’s behest, the first public rally for Maduro to resign took place on January 23rd, with a massive protest against the Maduro government.

Guaidó rapidly emerged as a young new leader of the opposition in the National Assembly. Following his participation in the 2007 student protests of Hugo Chavez, Guaidó began to make a name for himself within the Venezuelan opposition. His involvement in the protests ultimately led him to Leopoldo Lopez, the long-standing leader of the Venezuelan opposition. Lopez ultimately mentored Guaidó through the Voluntad Popular (Popular Will) political party, preparing him to assume the Presidency of the National Assembly.

With Lopez’ continued house arrest and ban from serving public office, Guaidó emerged as the leader of the opposition within the National Assembly. Upon assuming his new position, on January 5, Guaidó became increasingly vocal through his first few weeks in office, declaring Maduro a usurper of the presidency. On January 13, Guaidó was briefly detained by police officers in La Guaira on the way to a town hall rally. A video of the detainment taken by a motorist rapidly circulated social media. Guaidó was soon released, but the detention spread international awareness about the opposition’s struggle and brought Guaidó to the international stage.

Despite Guaidó’s prominence in the National Assembly, his efforts will lead to limited results without the support of the armed forces. While the military command remains under the control of the Maduro regime, personnel have begun to desert their ranks. Voluntad Popular has called on the National Guard to break ranks to help bring about a transition in government in exchange for amnesty. Videos were circulated on Monday of dissident soldiers swearing loyalty to Guaidó in Cotiza. The soldiers in question headed to the special security unit headquarters to commandeer military vehicles and call for a local uprising. On Monday, 27 soldiers of the National Guard were detained for their insubordination in connection to the transgression.

Maduro has overseen a steady decline in his executive power and public approval since taking office. In 2017, protestors took to the streets of Caracas for months, beginning in March and ending in August. Despite their conviction, the protestors were forced to discontinue their demonstrations after six months of continuous protesting and heavy-handed police repression. The repression of political dissent in Venezuela caused many countries within the Lima Group began to question the policy of diplomatic support for Maduro. In August of 2017, a bizarre drone attack was launched against Maduro during an open air rally. The Maduro government blamed the Lima Group for organizing the assault.

Debate and politicking over the Venezuelan Crisis is not confined to the domestic space. For years, the United Nations, U.S., Europe, and neighboring states have decried the abuse of executive authority, illiberal governance, and repression of the Venezuelan public. Now, it seems, the world is ready to assume a more active role in countering Caracas.

In the past year, Trump expressed on several occasions that all options remain on the table with the Venezuelan conflict. In September 2018, the New York Times reported that the Trump administration had met with dissident Venezuelan military officers about plans to overthrow Maduro. The meetings proved inconclusive — U.S. officials ultimately decided not to aid the officers in a coup attempt. However, the fact that the U.S. administration actively considered a kinetic engagement to support a regime change in Venezuela at a time when President Trump is scaling back the United States’ military presence in the Middle East underscores the dire threat that Maduro’s grip on power poses to regional stability and the level of engagement that the international community believes necessary to restore democratic governance to Caracas.

As widespread disapproval across the region for a military coup persists and the U.S. government remains mired in its own political showdown, it is unlikely that Washington will sponsor or encourage a military coup d’état in Venezuela. However, Guaidó has already indirectly presented the United States with a way to support the struggling democratic opposition. By amplifying Guaidó’s message and drawing attention to the conflict — Washington has already contributed to Guaidó’s international image and credibility.

The United States and the Lima Group have already voiced public support for Guaidó and backed his denouncement of the Maduro regime as illegitimate. Taking it a step further, on January 15, U.S. Vice President Mike Pence spoke on the phone with Guaidó and expressed the U.S. government’s “unwavering support” for the opposition. That message was then amplified by a public video that the Vice President released on Twitter, expressing the U.S. government and American people’s support for both the Venezuelan opposition and general public.

In the video, Pence affirms that “We will stay with you until Democracy is restored and you reclaim your birthright of Libertad.” In response to the video, Maduro has called for a revision of diplomatic relations with the United States on television and on Twitter, claiming that Pence is overstepping his authority.

Diplomatic reprisals in U.S.-Venezuelan relations are nothing new. In 2008, President Hugo Chávez expelled U.S. Ambassador Patrick Duddy from Caracas, citing a U.S.-crafted coup plot against his administration. Since then, the United States has been unable to send an official ambassador to Venezuela, relying on Foreign Service Officers to serve as the Chargé d’Affaires. That tenuous diplomatic thread was finally cut last year after Maduro targeted the remaining leadership of the diplomatic mission and expelled the U.S. Chargé d’Affaires Todd D. Robinson and the Deputy Chief of Mission Brian Naranjo. Given the current state of relations, it is difficult to see how Maduro can take any meaningful action against Washington short of military escalation, which would immediately undermine his efforts at diverting international engagement.

In addition to the brazen violation of civil liberties and human rights, the U.S. Government has denounced Venezuela’s burgeoning relationship with Russia. The Russian government has become a key ally of the Maduro government, providing aid in the form of debt-restructuring, the creation of the petro crypto-currency, and recently, procurement of military bomber planes. Russian Foreign Minister Sergei Lavrov publicly criticized American support for the Venezuelan opposition.

Regardless of the outcome, these events will prove to be a turning point in Venezuela. Either the opposition will succeed in rallying the people and the military to overthrow Maduro with the support of the Lima Group, or Maduro will demonstrate his unshakable control over Venezuela’s government. The culmination of the opposition’s appeal to the people combined with the gravitas placed upon the outcome by the international community has given the occasion particular weight. The opposition must demonstrate to the Venezuelan people and the international community that they can — and will — bring about a peaceful democratic transition. The time is now, or never.

In a grand gesture, Guaidó timed the widespread protests to coincide with the anniversary of the 1958 ousting of Venezuelan Dictator Marcos Perez Jimenez. Responding to a fellow member of the National Assembly on Twitter, Guaidó proclaimed, “We only have one clear action: to remain united and firm for a democratic and free Venezuela.” The stage is set. Whatever follows will influence Venezuelan politics and governance for years to come.

This article was originally published on The International Scholar.

Emily Tatum is the Senior Editor for Latin American Affairs at The International Scholar.