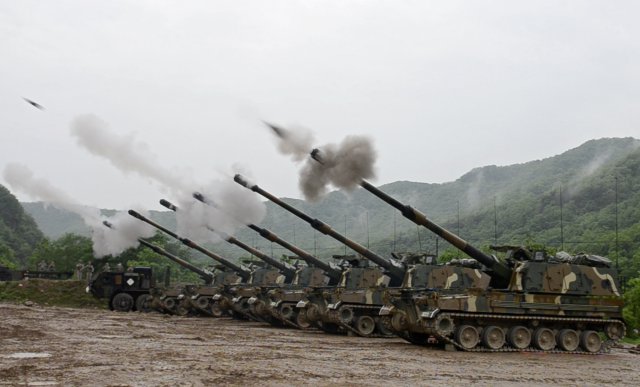 The escalating war of words between U.S. President Donald Trump and North Korean Leader Kim Jung-Un has effectively created a situation in which the U.S. Government has three strategic options.

The Trump administration could execute a complete policy reversal and accept North Korea’s nuclear arsenal in negotiations. This would undermine American foreign policy in that it would be seen as the capitulation of the United States to the rogue state of North Korea.

The North Korean government will, in no way, sign a nuclear weapons agreement with the Trump administration that sees them left without a nuclear arsenal. The concept of nuclear deterrence is fundamental to not only North Korea’s national security strategy but to the survival of the Kim family itself.

Based on the stated end-goal of “denuclearization” on the Korean Peninsula, it is unlikely that the U.S. would submit to demands like talks without preconditions, or agree on a framework for future negotiations. Such an action would look as if the U.S. was weak in upholding a stated national security objective.

The president is likely to make this decision (to attack), and we need to be ready.

It would also be seen as a sign of weakness by countries like Iran, Russia, and China. The alternative would be to use military force—something that seems increasingly likely to occur.

Senator Tammy Duckworth (D-IL), an Iraq War veteran and Purple Heart recipient, said: “we are far closer to actual conflict over North Korea than the American people realize. Everything we’re doing shows a military that, in my personal opinion, has turned the corner.” Senator Duckworth added, “the president is likely to make this decision [to attack], and we need to be ready.”

A conflict in North Korea could erupt with an overwhelming pre-emptive strike by the U.S. on North Korean government, nuclear, artillery, and military targets. This would involve strategic planning to ensure all necessary assets are in the region at the right time.

Despite the outdated nature of North Korea’s military forces, they remain a formidable adversary. North Korea ranks fourth among the world’s largest militaries with more than 1.1 million personnel in the country’s armed forces, accounting for nearly 5 percent of its total population.

Article 86 of the North Korean constitution states “National defense is the supreme duty and honor of citizens,” and it requires all citizens to serve in the military. The regime spent an average of $3.5 billion annually on military expenditures between 2004 and 2014, according to a U.S. State Department report.

Although its neighbors and adversaries outspend Pyongyang in dollar-to-dollar comparisons and defense experts, say it operates with aging equipment and technology, the regime’s forward-deployed military position and missiles aimed at Seoul ensure that Pyongyang’s conventional capabilities remain a constant threat to its southern neighbor. U.S. Secretary of Defense Jim Mattis has cautioned that war on the Korean peninsula would be “catastrophic” and he has described North Korea as “the most urgent and dangerous threat  to peace and security.”

“Sleepwalking” the path to war with North Korea

The alternate route to war is more subtle than an overwhelming pre-emptive strike. As the U.S. military steps up its air surveillance and show-of-force flights along North Korean borders, the risk of an incident occurring grows by the day. North Korean forces may perceive a show-of-force flight by a U.S. bomber as a critical threat and shoot it down, or they may believe it to be within North Korean airspace (even if it isn’t) and shoot it down just the same.

If an event such as this were to take place, there is little debate that the U.S. President would order a counterattack. North Korea has a significant number of artillery and short-range missile batteries within range of Seoul. There is little doubt that, in the event of an escalation to conflict, these would be used immediately to inflict as much damage as possible on South Korean and American positions (both military and civilian).

In contrast to Syria, where American destroyers launched Tomahawk cruise missiles at a target within Syrian territory from the safety of the Mediterranean and without much of a risk for a counterattack, U.S. forces engaged in a counterstrike against North Korea in such a scenario would be land, air, and sea forces of overwhelming capability. There would be very limited time to secure critical military assets and positions before they could be used against U.S.-allied forces.

The U.S., South Korean, and (presumably) Japanese forces would need to concentrate initial efforts on disabling North Korea’s artillery batteries and missile installations that are within range of Seoul, eliminating the regime’s command-and-control capabilities over their troops, and securing North Korea’s nuclear arsenal before it can be used.  It would be nearly impossible to execute a pre-emptive strike that minimized civilian and military casualties. Any war, conflict, or use of force on the Korean peninsula will risk a resulting death toll of a size not seen since the last Korean War.