Similar to the Great Recession, the COVID-19 pandemic could yet again provide evidence to PRC leaders that their country is rising while the U.S. is falling. 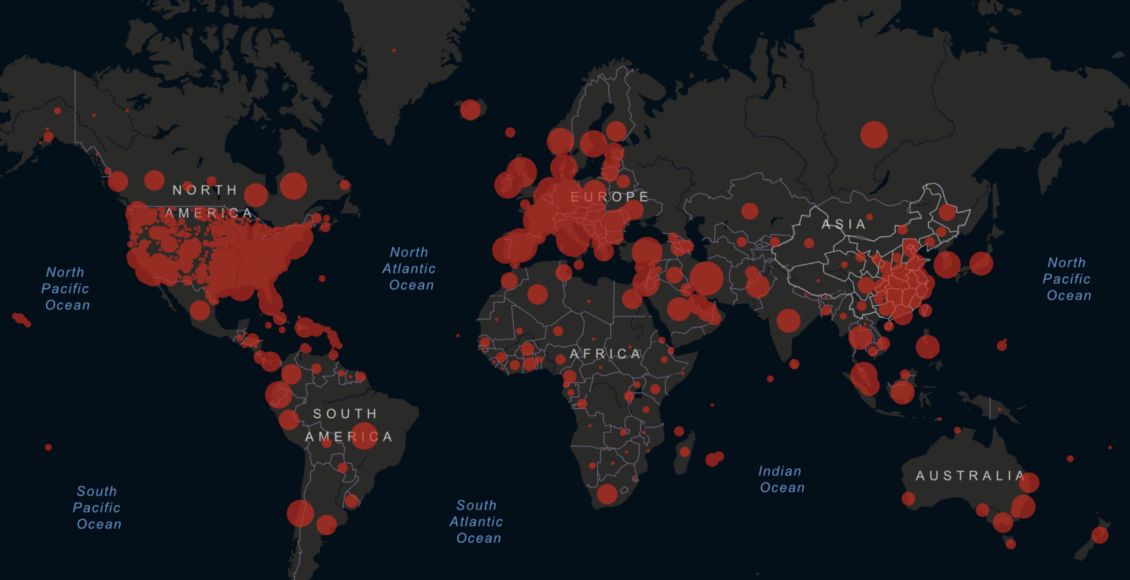 Cumulative confirmed cases of COVID-19 as of April 2, 2020 (Credit: Center for Systems Science and Engineering at Johns Hopkins University)
Share

As the world continues its battle with COVID-19, new questions are emerging about how the virus could reshape the global geopolitical landscape and economic order. These questions dovetail with concerns about thpe future of China’s increasingly assertive foreign policy. Some analysts may now begin to wonder: will China see in the COVID-19 pandemic the same sort of opportunity it saw in the 2008 financial crisis?

The Great Recession of 2008 was America’s worst financial crisis since the Great Depression. Millions of Americans lost their jobs and homes, and trillions of dollars evaporated from U.S. stock markets. By several metrics, the U.S. has yet to recover some 12 years later.

What is frequently overlooked is how well China weathered the financial crisis. At its worst, China’s economic growth slowed from a high of 14% in 2007 to a low of 9.4% in 2009. Meanwhile, the American economy’s meager 1.8% growth in 2007 eventually bottomed out with a 2.5% contraction two years later.

The Great Recession became a pivotal moment for leaders and analysts in China. Many took note of the discrepancy between the performance of the two economies, attributing the difference to how each government responded to the crisis in their respective countries. The change that the PRC’s success induced was psychological. It marked the moment that many in China began to give more support to two interrelated propositions. The first being that China is on the rise. The second is that the U.S. is on the decline. Many people in China did not hide or mask this conclusion. For example, in 2017, China’s Vice Minister of Foreign Affairs He Yafei wrote that 2008 was possibly the “watershed year” that ushered in the end of the era of American hegemony, Pax Americana.

Given this assessment, the PRC likely saw the Great Recession as a strategic opportunity. Its government proceeded to shepherd through challenging and profound changes to its foreign policy approach. The most notable of these changes involve the gradual but continued shift from a restrained policy to a more assertive one. In the decade since China has shown its ambitions to reshape the international order more to its favor, press forward with unilateral claims in the South China Sea, assert itself more forcefully in diplomatic encounters and countenance the prospect of maintaining unstable relations with the U.S. to achieve other strategic interests.

China reaped enormous gains as a result of the distraction and momentary weakness of America and its allies. Chinese-led multilateral institutions are increasing in number. The PRC continues to maintain militarily uncontested control over its illegal maritime territories. CCP General Secretary Xi Jinping’s landmark grand strategy, the Belt and Road Initiative, has been pursued with vigor, mainly to the benefit of China’s economic, political, and security interests. Furthermore, China has yet to buckle under pressure from the U.S. to resolve the trade war.

China reported an outbreak of a new contagion to the World Health Organization (WHO) in December 2019. This virus subsequently came to be known as COVID-19. After initially bungling its response, the PRC snapped into action and took drastic measures, enacting the most widespread and comprehensive lockdown of its population in the country’s history. Months later, the final weeks of March have demonstrated the effectiveness of its approach. China regularly reports that homegrown cases are down to zero. Life in Wuhan will soon return to normal. And China is dispatching medical supplies and hundreds of doctors to Italy to help the country’s beleaguered hospitals.

If the United States' response fails to adequately address the crisis, the damage to the economy, people’s livelihoods, government credibility, and even international reputation could be tremendous.

Meanwhile, almost 90 days after China’s first report to WHO, the U.S. has continued to struggle on nearly all fronts. The United States took virtually no action in the lead-up to its own outbreak and has had a disjointed and spastic response since. The process of manufacturing and procuring ventilators from the private sector has been marred by vacillations within the Trump administration. Efforts to obtain test kits and put them to use have faced complications due to uncertainties about financing and eligibility. Congress spent weeks haggling over much-needed bailout provisions. As of March 26, the U.S. has the highest number of confirmed coronavirus cases of any country in the world. Meanwhile, Americans are left confused by the tangled web of preventive measures that can differ from state to state, county to county, or even city to city.

If the United States’ response fails to adequately address the crisis, the damage to the economy, people’s livelihoods, government credibility, and even international reputation could be tremendous. This, of course, is all in addition to the tragic loss of human life that would result.

In contrast, China has recently gone on a propaganda blitz. PRC Foreign Ministry spokesperson Geng Shuang has stressed that the coronavirus will be a “major impetus” for friendship and cooperation. In phone calls with world leaders, Chairman Xi Jinping of the Chinese Communist Party has preached his country’s desire to offer assistance and cooperation. And Jack Ma, the founder of the Chinese internet juggernaut Alibaba, has pledged to send 500,000 test kits and one million masks to the U.S. China, in effect, is trying to frame itself as a global leader, a capable partner, and a steadfast friend in the fight to contain the coronavirus.

Apart from some criticism by Western officials such as U.S. Secretary of State Mike Pompeo and EU High Representative Josep Borrell, China has faced little resistance in promoting its narrative as the world’s savior. One reason is that China’s help is genuinely needed in many countries struggling to battle the epidemic. But another reason is that China effortlessly stepped into a gaping leadership vacuum left by the U.S., Europe, and their allies. This may only be the first (and most innocuous) step in an intensified effort by the PRC to pursue greater strategic objectives.

It is still too early to say how this epidemic will play out in the United States. A lot may depend on what the U.S. government does—and does not do—in the coming weeks. However, it is not too early to speculate about how a perceived success by the PRC coupled with the perception of a U.S. failure could impact the former’s calculus. Similar to the Great Recession, the COVID-19 pandemic could yet again provide evidence to China’s leaders and analysts that their country is rising while the U.S. is falling. And just like the developments that followed in the wake of the Great Recession, this could once again energize China to take advantage of a relatively weakened and distracted West by doubling down on its commitment to proactive foreign policy pursuits.

China’s own rapid recovery is far from guaranteed, and the U.S. still has time to respond.

At the same time, other factors could further facilitate Beijing’s ambitions. Reputationally, China may score additional gains among countries that recognize China’s response and recovery as more effective. Economically, U.S. businesses may be hit twice. First, American companies will suffer the direct effects of an economic slowdown at home. Second, U.S. businesses operating in a prolonged recession may be at a disadvantage to Chinese businesses enjoying the benefits of an earlier economic recovery, resulting in the potential loss of billions in missed business opportunities.

However, China’s own rapid recovery is far from guaranteed, and the U.S. still has time to respond. As Singapore’s Foreign Minister Vivian Balakrishnan said in a televised CNBC interview on March 10, COVID-19 is “a test of preparedness on all fronts […] The United States has got enormous resources at its disposal […] I would never count the Americans out.”

James Gannon is a M.A. candidate in Security Policy Studies at The George Washington University's Elliott School of International Affairs. Most recently, he conducted research and translation work for Trivium China, a Beijing-based international relations consulting firm. Prior to Trivium, James also did research and translation for two DC-based organizations: the Center for Advanced China Research and the US-China Education Trust. In 2019, James was the recipient of the National Security Education Program's Boren Fellowship and the State Department's Critical Language Scholarship. James holds a B.A. in International Studies from the University of Missouri.