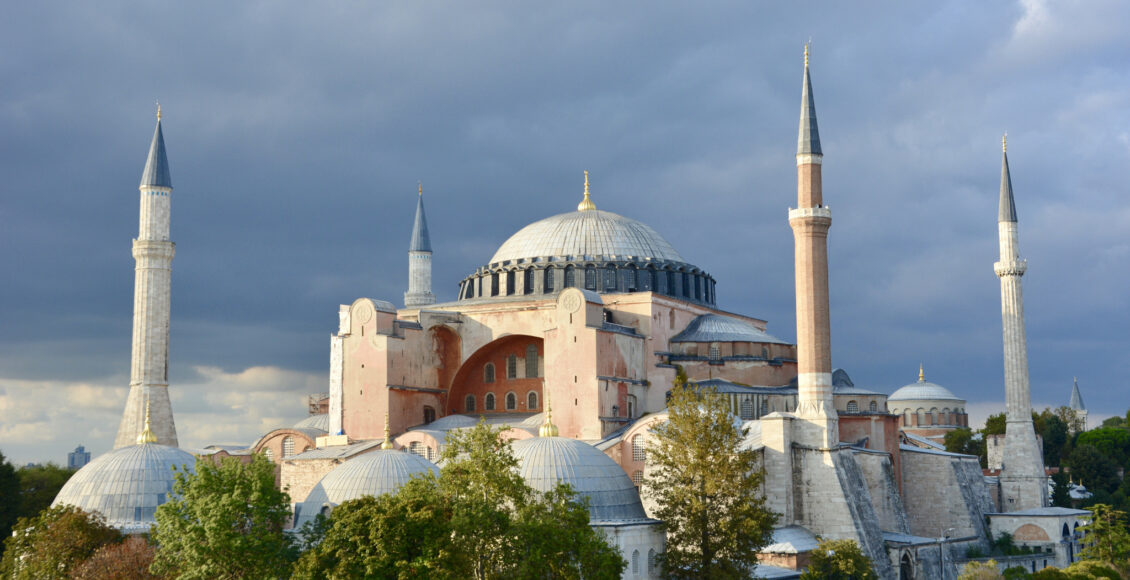 Europe is now home to one of the world’s strangest paradoxes. The continent’s most prominent mosque, the Great Mosque of Cordoba, has served as a church since the year 1236. Meanwhile, Ankara in July converted Europe’s most prominent church, the Hagia Sophia of Istanbul, from a museum into a mosque for the second time in the last six centuries. Turkey’s Islamist-rooted Justice and Development Party (AKP), ruling the country since 2002, has cited the 1236 conversion of the Cordoba mosque to justify Hagia Sophia’s conversion. The AKP’s rekindling of medieval revanchist sentiments gives voice to a conquest mentality that is best left in the past and one that spells trouble for interfaith relations.

While the two edifices are on opposite ends of Europe, they have much in common. Both are arguably the most beautiful standing expressions of Mediterranean civilization, and both represent a vanquished world. Hagia Sophia was the crowning architectural achievement of Orthodox Christianity and the Byzantine Empire, and the Great Mosque of Cordoba remains the unparalleled testimony of Islamic identity in Spain. When the civilizations that built the monuments collapsed, both structures underwent forced conversions.

Speaking after the July 10 decree to turn Hagia Sophia from a museum into a mosque, Turkish President Recep Tayyip Erdoğan wasted no time in riling up Islamist support for his controversial decision, saying it appeals to those from “from Bukhara to Andalusia.”Andalusia references the Mosque of Cordoba – which, although it resides in Spain, has long been a point of obsession for AKP elites with visions of restoring what they view as the golden age of their civilization. They believe that this civilization is locked in an irreconcilable struggle with Christendom.

Other key members of the AKP have made their feelings about the Cordoba Mosque well known. Foreign Minister Mevlut Cavusoglu recently cited the conversion of Cordoba into a church to defend Ankara’s decision to convert Hagia Sophia into a mosque. Likewise, former Turkish Prime Minister Ahmet Davutoglu justified the Hagia Sophia decision by evoking the Cordoba mosque, opining that under Spanish administration, “the miracle of Cordoba Mosque almost disappeared.” Davutoglu further asserted that it was hypocritical to discuss Hagia Sophia without talking about the Great Mosque of Cordoba.

Yet this comparison is merely a pretext for supremacist policies. In fact, notwithstanding their similarities, there are vast differences between the two buildings. While the Great Mosque of Cordoba is the primary historical monument to Islamic civilization in Spain and was of regional significance, its influence and place within Islam were not comparable to Hagia Sophia. As the former capitol of Orthodox Christianity, Hagia Sophia has a place within the Orthodox world that is more comparable to the Kaaba for Muslims or Saint Peter’s Basilica for Catholics – it was the capitol and cultural center of Orthodoxy. Hagia Sophia is, according to Theophilos III, the Greek Orthodox patriarch of Jerusalem, “The heart of the Eastern Orthodox Christian world as a site of Christian worship, sanctified by the blood of martyrs.”

Moreover, the AKP’s rhetoric of right by conquest belies its disingenuous concern for the Great Mosque. Popular Turkish discourse influenced greatly by the AKP, portrays the 1453 conversion of Hagia Sophia into a mosque, an event that represents the culmination of the conquest of the Christian Byzantine Empire and Constantinople, as a moment of glorious military triumph, the capstone in the myth of the creation of the Turkish nation. “In our civilization,” said Erdogan in late August, “conquest is not occupation or looting – it is spreading the dominance of Allah in the conquered land.” Thus, according to Ankara, the conquest of Hagia Sophia is fundamentally good and therefore dissimilar to the conquest of the Great Mosque.

Hagia Sophia and the Great Mosque of Cordoba are priceless artifacts of a now long-lost world. To subject them to conquest rhetoric and to use them to settle scores disgrace their multi-faith legacy.

Philip Kowalski is a research associate at the Foundation for Defense of Democracies, a Washington, DC-based, nonpartisan research institute focusing on national security and foreign policy. Follow him on Twitter @philip_kowalski.