As Russia Identifies as a Eurasian Power, It Turns Away from Europe 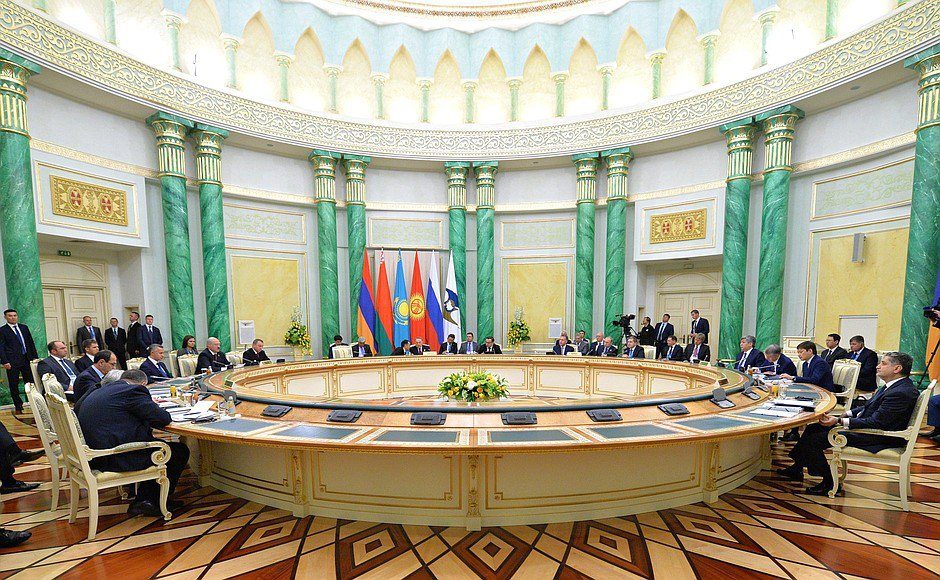 The relationship between Russia and the E.U. is at its lowest point since the Cold War.

The E.U. first decided to impose sanctions in the wake of the March 2014 annexation of Crimea, which were expanded a few months later after Russia began a destabilizing hybrid war in eastern Ukraine, and after a Russian-made missile destroyed Malaysia Airlines Flight MH17 over eastern Ukrainian territory controlled by separatist forces backed by the Kremlin.

In 2018, E.U. members states joined the United Kingdom and the United States in expelling a record number of Russian diplomatic and intelligence personnel in response to the reportedly Kremlin-ordered attempted assassination of former Russian military intelligence officer Sergei Skripal, in which the nerve agent Novichuk was used on U.K. soil.

At the turn of the century, Russia saw itself as European. However, as E.U.-Russia relations have steadily deteriorated over the past decade, Russia has turned away from Europe, identifying instead as a Eurasian power. In the aftermath of the Soviet Union's collapse, Russian President Boris Yeltsin promoted the idea of E.U. integration for Russia, and upon becoming president in 2000, Vladimir Putin pursued a similar path.

The 2000 Russian Foreign Policy Concept, a whitepaper produced by the Kremlin that defines Russia's foreign policy, identified the E.U. as being critically important for Russia as one of Moscow's primary "political and economic partners." While the Kremlin still perceived NATO and the U.S. as Russia's foremost national security threats, in addition to impeding Russia's long-term goal of restoring its status as a "great power," the European Union was viewed favorably.

However, this perception did not last. Following the 2003 invasion of Iraq, led by the U.S., Putin became increasingly vocal about the necessity for Russia to reestablish itself as a "great power" to adequately defend its interests in the post-Cold War era. Concurrently, the Kremlin, in both rhetoric and action, became increasingly assertive about what it considered its right to dictate the foreign policy of neighboring states, located in what Russia historically regards as its sphere of influence.

In 2004, the Baltic republics of Estonia, Lithuania, and Latvia (former Soviet republics) joined the E.U. along with multiple former members of the Warsaw Pact, such as Poland. In response, the Kremlin denounced the E.U.'s expansion, accusing the bloc of creating divisions across the European continent.

The expansion of the E.U. into what Russia viewed as its sphere of influence, combined with the wave of "color revolutions" in several former Soviet republics between 2003 and 2005, led the Kremlin to begin regarding the E.U. as a power with expansionist ambitions that threatened Russian sovereignty and strategic foreign policy aims.

Under Putin, Russia grew convinced that both the E.U. and the U.S. played a part in the "color revolutions" in Georgia, Ukraine, and Kyrgyzstan, which either could have—or did—shift the alignment of those states towards Europe, at Russia's expense.

The perception in Moscow of the E.U. as a distinct and separate entity from NATO and the U.S. faded between 2004 and 2008. From Russia's point of view, all three actors were working to impede Russia's foreign policy, and undermine its sovereignty by imposing on Russia an international order that was at odds with Russia's interests.

Less than eight years after desiring greater integration with Europe, Putin regularly accused the U.S. of unipolar hegemony and argued that the post-Cold War order was unfair. In a speech delivered at the 2007 Munich Security Conference, Putin asserted that the U.S. "overstepped its boundaries in all spheres—economic, political, and humanitarian." As a consequence, he stated that Russia would follow an "independent foreign policy."

The Russian Foreign Policy Concept released in 2008 subsequently downgraded the E.U. from a "main political and economic partner" to "one of the main trade-economic and foreign policy partners." In the same year, Russia invaded Georgia and occupied the regions of Abhkazia and South Ossetia, situated along Georgia's border with Russia.

In response, the E.U. halted negotiations on what would be a new Partnership and Cooperation Agreement that would define Moscow-Brussels relations. In 2009 the E.U. launched its Eastern Partnership initiative with six former republics of the Soviet Union.

The following year, the Eurasian Customs Union (ECU) was formed by Russia, Belarus, and Kazakhstan. The ECU was intended as a counterweight to the E.U. and was designed to consolidate Russia's influence in the post-Soviet space to guarantee its national interests better and increase its global standing.

Russia Turns Away from Europe—to Eurasia

In 2012, Moscow was overwhelmed by large-scale protests over the reported rigging of the 2011 parliamentary elections. The Kremlin, again, saw the protests as being part of a Western plot to destabilize Russia's political system and foment regime change. Putin, having returned to the presidency that year, began instituting structural reforms that would impede Western influence within Russia, while simultaneously promoting Russia as the conservative defender of traditional values.

The 2014 Maidan Revolution in Ukraine that toppled the pro-Russian government of President Viktor Yanukovych was seen by Putin as yet another example of Western interference in Russia's historical sphere of influence. Just months after Yanukovych fled Ukraine, Russia annexed the territory of Crimea from Ukraine and stoked a devastating civil war in eastern Ukraine.

In recent years, Russia has gone on the offensive against the West, interfering in multiple elections and exploiting political divisions in Europe and the United States. From the Russian perspective, this is only logical. The Kremlin maintains that the E.U and the U.S. were engaged in a plot designed to destabilize and weaken Russia, so it attempts to do the same.

Relations between the E.U. and Russia largely reflect the broader relationship between Russia and the West. Russia's 2016 Foreign Policy Concept eliminates any reference to the European Union, instead emphasizing "Eurasian integration," a reference to the Eurasian Economic Union (EAEU), the successor to the ECU. Currently, Russia, Belarus, Kazakhstan, Armenia, and Kyrgyzstan are members.

The EAEU is intended to facilitate the economic integration of former Soviet republics into a single economic entity. Russia's reorientation towards Eurasia through the EAEU is a signal that it now sees the E.U. as something that, instead of cooperating with, must be confronted.