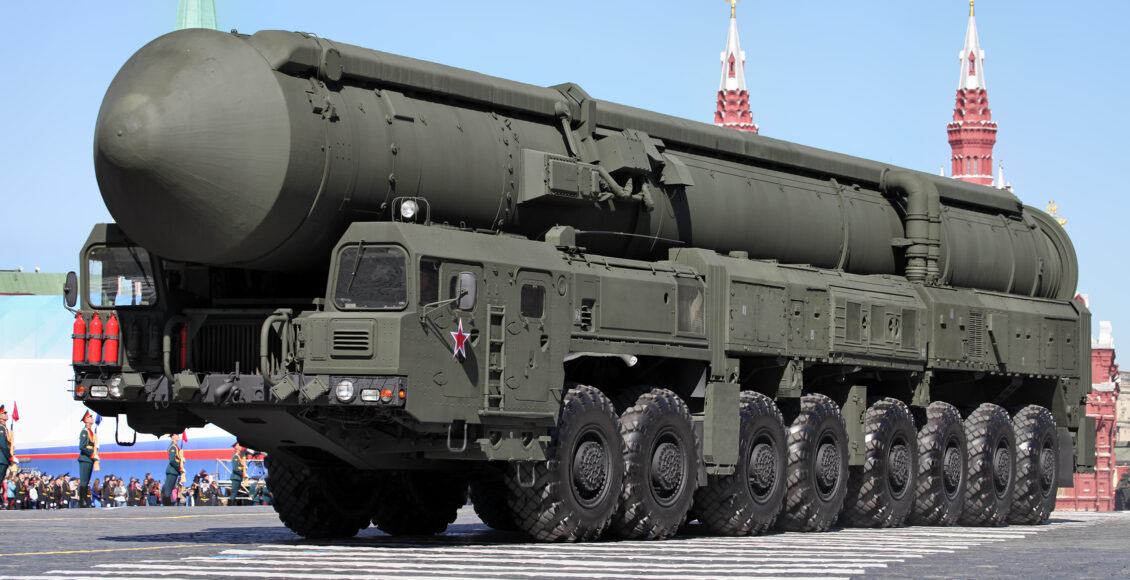 This article was originally published on August 20, 2018 as “Nuclear De-Escalation: Russia’s Deterrence Strategy.”

Russia’s military doctrine dictates the use of nuclear weapons in response to any non-nuclear assault on Russian territory.

Russia’s military doctrine encompasses a broad range of potential national security threats, including local, or small-scale wars, regional, or large-scale wars, internal and foreign military threats, the Russian military’s budget, and a host of military-related technical, political, social, and economic issues. Additionally, the doctrine defines the circumstances under which nuclear weapons are to be used by the Armed Forces of the Russian Federation in response to a threat to Russia’s national security.

The current edition of the Russian military doctrine—when compared to the national security strategy and military doctrine published in 1993—significantly lowers the threshold under which the use of nuclear weapons is permitted. While the 1993 doctrine allowed the first use of nuclear weapons only when the “existence of the Russian Federation” is threatened, the versions published since 2000 explicitly state that Russia “reserves the right to use nuclear weapons to respond to all weapons of mass destruction attacks” on Russia and its allies.

Furthermore, the doctrine released in 2000—and all subsequent versions—allows for nuclear weapons use “in response to large-scale aggression utilizing conventional weapons in situations critical to the national security of the Russian Federation.” Succinctly put, Russia’s entire national security strategy is predicated on the concept of nuclear de-escalation.

In the year before the release of Russia’s 2000 military doctrine, Russia’s military and political leaders warily observed as NATO executed an efficient and precise conventional military operation in the former Republic of Yugoslavia. In 1999, Russia was facing renewed tensions in Chechnya in the aftermath of the disastrous war that broke out following the Soviet Union’s collapse.

It was clear that the United States (and its allies) possessed far greater conventional military capabilities than Russia. Plus, the underlying ethnic and religious issues in Kosovo which led to NATO taking action were seen by Russia as almost identical to those underlying the first Chechen war. These similarities, combined with Russia’s historical view of Serbia—the successor state to the Republic of Yugoslavia—as its “little brother,” led to Moscow developing deep anxiety that the United States would involve itself in another within Russian borders.

In 2000, Russia released an updated military doctrine in which it outlined the concept of de-escalation through a limited nuclear strike. This idea put forth the notion that if Russia were subjected to a major non-nuclear assault that exceeded its capacity for conventional defense, it would “de-escalate” the conflict by launching a limited—or tactical—nuclear strike. While this policy has never been publicly discussed with relation to any particular conflict, the concept of nuclear de-escalation undoubtedly was on the minds of Western leaders during Russia’s invasion of Georgia in 2008, and in the ongoing conflict in eastern Ukraine.

Conventional and Nuclear Deterrence During the Cold War

The Soviet Union’s collapse and the effective end of the Cold War in the 1990s left Russia and the United States with significantly less reason to fear that one would launch a massive, surprise strategic nuclear attack on the other. The role nuclear weapons played in the international geopolitical framework was fundamentally altered. Nuclear weapons no longer were the centerpiece of security relationship based on the concept of Mutually Assured Destruction (MAD).

Instead, they became status symbols; at the very most, they were considered the ultimate insurance policy against unforeseen aggression. Nuclear weapons maintained their role as the penultimate security guarantee; however, they had very much moved to the background of the international security stage. Many, particularly in the West, believed that global nuclear disarmament was an attainable goal.

During the Cold War, deterrence was effective in maintaining peace between the two superpowers because both states ensured that the other would be deterred on all levels in the event of escalating tensions. At the time, the security relationship between the U.S. and the U.S.S.R. was heavily dependent on the concept of parity.  Conventional forces were deterred with conventional forces of equal strength, while nuclear arsenals were positioned in support of mutually assured destruction.

As the Soviet Union broke apart, following years of economic stagnation, the United States and its allies were demonstrating their significant conventional military capabilities in their 1990-1991 campaign to expel Iraqi occupying forces from the oil-rich state of Kuwait.  Russia’s military and political leaders grew increasingly wary about the imbalance—to Russia’s disadvantage—in conventional power projection and efficacy.

This anxiety amongst the Russian military’s top brass further developed during the U.S.-led NATO 1999 intervention in Kosovo. The United States’ conventional military power became a clear and distinct threat to Russia. There were many similarities between the origins of the Kosovo conflict and Russia’s own internal war with Chechen separatists during the first Chechen War. What Russia feared most was that the U.S. would intervene in what Russia considered its’ internal affairs. If the U.S. were to launch a non-nuclear (i.e. conventional) assault against the newly formed Russian Federation, Russia’s conventional forces would be of little benefit.

As nuclear deterrence theory during the Cold War was predicated on the concept of “mutually assured destruction” (MAD), deterrence strategy required that effective and credible forces were maintained at every level—conventional and nuclear to be effective. The Soviet Union’s collapse decimated that military’s conventional force projection capabilities. The subsequent Russian military’s ability to deter any conventional U.S. or NATO military action against Russia was rendered ineffective.

The efficacy of the United States’ high-precision conventional weapons was demonstrated in both the Balkan and Iraqi campaigns of the 1990s. Unlike nuclear weapons, these precision-guided “smart bombs” were highly usable and effective—in stark contrast to nuclear weapons. Framed in this context, Russia’s military planners became painfully aware of their strategic disadvantage. Thus, the concept of nuclear de-escalation was born.

Before the conclusion of NATO’s Kosovo operation, Russia initiated the development of a new military doctrine that would deter any conventional or nuclear strike against Russia.  Responsible for the supervision of this effort was then-secretary of Russia’s Security Council, Vladimir Putin. Coincidentally, it was Putin who would sign this doctrine upon its release in 2000, having just become president.

De-escalation revises the scale of a possible nuclear strike. While Cold War deterrence was predicated on the threat of inflicting an overwhelming degree of damage on enemy military and civilian targets, de-escalation rests on the concept of “tailored damage.” The doctrine defines “tailored damage” as inflicting “damage subjectively unacceptable to the opponent [and] exceeds the benefits the [opponent] expects to gain as a result of the use of [conventional] military force.” In other words, Russia’s military planners believed that the threat of a limited or tactical nuclear strike against enemy targets would be an effective deterrence against a conventional attack by the United States or NATO.

Today, the concept of “nuclear de-escalation” continues to be in play, presenting a significant challenge to western military strategists. If Russia were to mount a successful invasion of the Baltic states, it is likely that Russia would consider these countries to be sovereign Russian territory, meaning that any conventional NATO military operation designed to restore the independence of the NATO members would likely be met with a limited nuclear strike. That is, of course, unless U.S. or NATO cyber or other non-kinetic capabilities can disrupt Russia’s nuclear command-and-control apparatus.