Kissinger Was Right: Statesmanship in the Digital Age 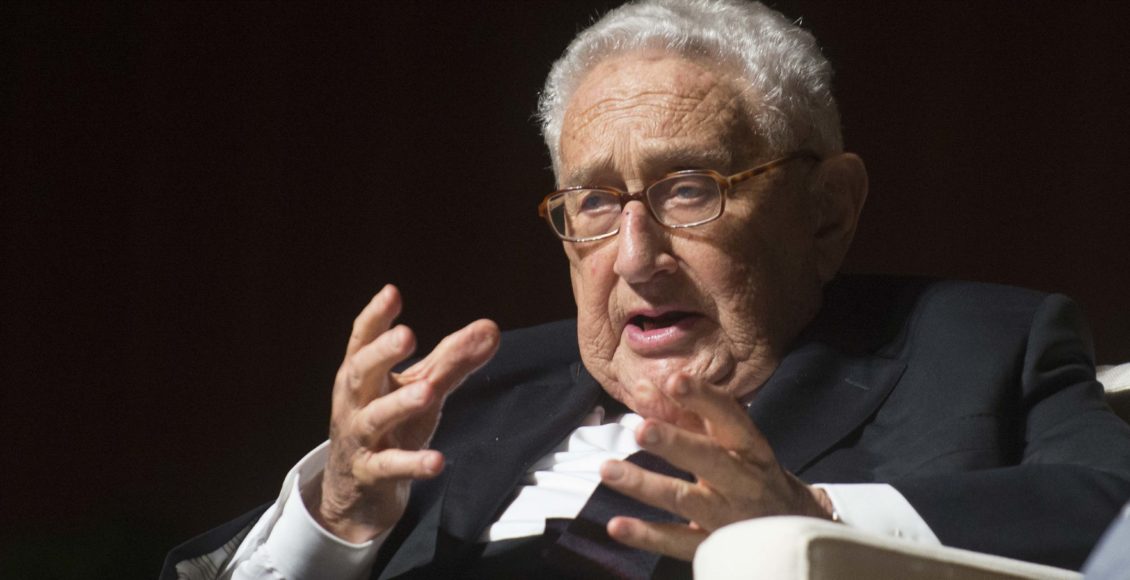 Technologists and policymakers often speak different languages and have difficulty understanding each other, such as Mark Zuckerberg having to explain how the internet works at a basic level to members of Congress. However, the coming problems with artificial intelligence (AI) will require a consistent dialogue on what the U.S. government must do, and former Secretary of State Henry Kissinger offers an essential guide for both technologists and policymakers.

Kissinger’s approach to statecraft and foreign policy is especially useful when applied to national security in the digital age. The rapid shift to an information-based economy has changed politics, society, and economics in practically every capacity, and these changes have disrupted almost everything technology has touched. Primarily, AI is already having a profound influence on the global economy, and AI will become an essential element of military power, such as warfare platforms, cybersecurity, target recognition, and threat monitoring. With the constant oscillations from new technologies, students, scholars, and practitioners need to maintain a proper framework of analysis if the US will achieve its strategic objectives and defend the national interest. Kissinger shows that these changes should not impact the fundamental goals of a country’s foreign policy.

Writing in Foreign Affairs, Scholar Amy Zegart and former Acting Director of the CIA Michael Morell argue that the U.S. intelligence community is behind the curve when approaching these rapid technological changes, and the failure to identify and respond to Russia’s interference in the U.S. presidential election in 2016 shows that policymakers need an overarching vision.

Great powers have started pursuing AI strategies in competition against each other that will upset the balance of power. President Trump has signed the executive order to establish the “American AI Initiative;” China has its “New Generation Plan” to be the world leader in AI by 2030; Russia’s Vladimir Putin even stated that AI would determine the future “rule of the world.” China has especially put efforts towards AI in an attempt to move academic, military, and commercial research towards its goal of domination. The U.S. is also willing to push for an increase in AI research as the Defense Advanced Research Projects Agency will spend $2 billion, and the U.S. Army will spend $72 million to research AI, both over the next five years. Such financial and political commitments signal a quickly shifting defense landscape that foreign policy leaders need to comprehend and then prepare for such a future.

At the Bush Center’s Forum on Leadership 2019, Kissinger summarized his view of statesmanship. He stated, “The task of a leader is to bring his society from where it is to where it has never been. And in order to do that, you need vision and courage. You need to be able to imagine what doesn’t yet exist, a better future for your people. And then you have to have the courage to withstand the attacks from those that have to alter their attitudes.” Considering the rapid technological changes that have taken place in the previous decade, and the significant changes that are likely in the next decade due to AI research, political leaders need to focus on the objectives that Kissinger describes in his early works to create such a future.

Kissinger’s first two books—A World Restored and Nuclear Weapons and Foreign Policy (both published in 1957)—are quintessential to understand his political philosophy and the lessons for those who work in foreign policy. A World Restored, Kissinger’s first book based on his dissertation, explored the consequences of the Napoleonic wars and how diplomats—especially Austria’s Metternich and Britain’s Castlereagh—created a legitimate and stable international order. As biographer Walter Isaacson observed, even in the 1950’s Kissinger’s dissertation topic exploring early 19th century court diplomacy was suspect (Kissinger also admits this in the opening sentence of A World Restored). Yet the text on the diplomacy of Europe in the 1800s would form a framework of analysis for Kissinger in confronting the Soviet Union.

The U.S. was at the beginning of the Cold War, and thermonuclear war was the most pressing issue for most scholars and politicians. However, Kissinger focused on how legitimate international orders are created and how such an order can contain a revolutionary state. Revolutionary states create chaos and significantly more injustices than any order (examples include the French Revolution and Napoleonic Wars, Russian Revolution, Cultural Revolution, Arab Spring, and many others in the previous two centuries alone. Although the text is a historical analysis, this work, in many ways, is an analogy of World War II and Hitler’s revolutionary state that upended the international order.

Nuclear Weapons and Foreign Policy took up the same theme of containing revolutionary states. Still, with this work, Kissinger incorporated how nuclear weapons impacted the United States’ “strategic doctrine” (translating power into policy) and maintaining the international order. A strategic doctrine is requisite because circumstances and technology will continuously shift and evolve. The U.S. will need to contain revolutionary states and/or rival powers that could upend the established order through advances in AI. Without a doctrine, the U.S. would have to act haphazardly and defensively, which will be a waste of energy, resources, and ineffective. For example, China’s current pursuit of AI in maritime operations will be a serious challenge to U.S. primacy in the Pacific. “Extra Large Underwater Unmanned Vehicles” (XLUUVs) researched by the Chinese Academy of Sciences could be used for anti-carrier operations through electronic and mine warfare. In the meantime, China is further modernizing its naval forces, and the People’s Liberation Army Navy already has more vessels than the U.S. Navy. If the U.S. falls behind in such areas without a strategic doctrine, then the ability to project power or coerce revolutionary states will be significantly diminished.

Therefore, the themes for Kissinger’s early works can be summarized as:

Writing in The Atlantic, Kissinger delineated the concerns of AI to statesmen, starting with a story about the game Go and machine learning. Machine learning, an AI method, does not require programmers to write rules for the system to follow. Instead, the machine will learn the rules by analyzing the data. Because of machine learning, AI is now utilized for disparate functions, from self-driving cars to diagnosing cancer. Kissinger wrote that at a conference on transatlantic issues, he attended a session on artificial intelligence and how AlphaGo (the AI program) was able to “decisively defeat” expert Go players after refining its algorithms through machine learning. Kissinger raises more questions than he answers and points to the inherent uncertainty of machines that can go beyond human intelligence or experience, such as mastering a game better than the experts. However, as he writes, “these algorithms, being mathematical interpretations of observed data, do not explain the underlying reality that produces them.” This will be the role of statesmen, explaining the underlying reality and forming a strategic doctrine based on it.

The power of such AI programs will radically alter the way wars are fought, and the global economy operates. For the military, modernization in areas such as autonomous systems will significantly increase the lethality of conflict in conventional wars. Iran is already moving its military industries towards robotics and autonomous systems. Even if they are currently behind, they and other adversaries are highly likely to catch up to the US, China, and Russia. Concerning the impacts to markets, AI will add between $13 trillion and $15 trillion to the global economy by 2030. Although there will be significant contributions to the global economy due to increased productivity, there will be negative impacts on the labor market as fewer people become needed for jobs.

It is without a doubt that artificial intelligence and the digital age have transformed conflict and economics, but this will only alter the balance of power rather than the objectives of countries.  Kissinger’s prioritization of the stability and legitimacy of the international system requires leaders to grapple with the global impacts of AI that range from automated production systems that increase unemployment to wide-ranging recognition software that raises a plethora of legal and ethical issues over lethality when related to the execution of warfare.

In 1957, Kissinger wrote, “[N]uclear technology makes it possible, for the first time in history, to shift the balance of power solely through developments within the territory of another sovereign state.” Now, the world’s nation-states are entering a new era in which the balance of power—economic and military—can radically alter within a sovereign state through developments in artificial intelligence. Even though there will be a multiplicity of technological changes in disparate areas of politics, the role of the statesmen is static while the circumstances change. This does not alter the goals of foreign policy; it alters how foreign policy is conducted. The reason: rapid technological evolution creates new problems when it changes the distribution of power in the international system.

To maintain its position, the U.S. must win on AI and fully move into a post-industrial economic model that re-trains the newly unemployed in emerging industries. To mitigate wars that cost lives and displace multitudes of people, the U.S. must win on AI military developments and keep U.S. military superiority–a superiority that is being challenged like never before due to technology. To ensure the lasting political openness of the world’s oldest democracy, the U.S. must push for AI developments in line with its values and norms.

As Kissinger wrote in his article on AI, “The digital world’s emphasis on speed inhibits reflection; its incentive empowers the radical over the thoughtful; its values are shaped by subgroup consensus, not by introspection.” This is the time for foreign policy practitioners to be reflective, thoughtful, and introspective, and Kissinger’s framework of analysis on a legitimate international order will help guide statesmen in the digital age.

Treston Wheat is a strategic intelligence analyst at AS Solution where he focuses on the intersection of geopolitics and cybersecurity. He received a M.A. from Georgetown University and a Ph.D. from the University of Tennessee.