Geopolitical Shifts in the Middle East 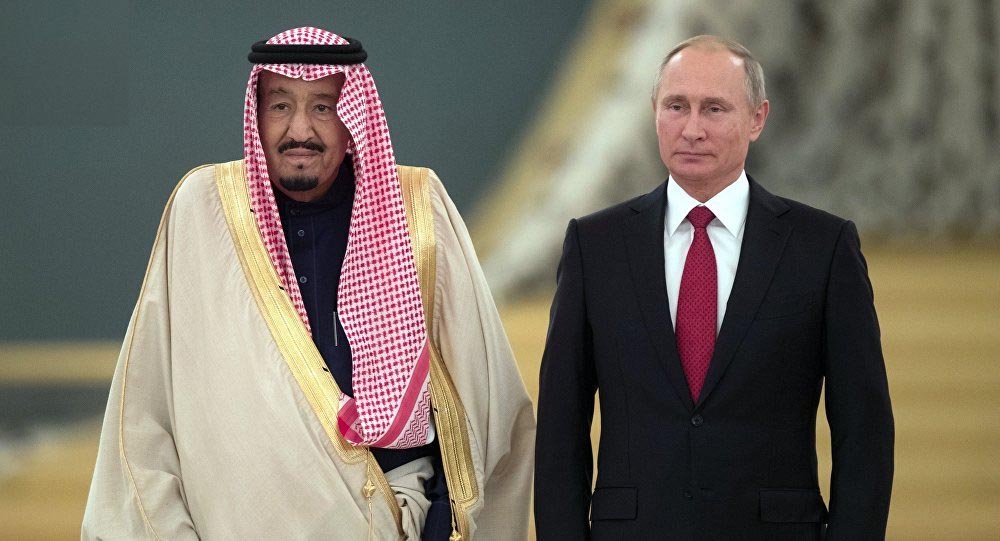 The emergence of a Russian-Iranian-Turkish triangle is a new reality. The Western hegemony in the MENA region has ended, and not in a shy way, but with a long list of military conflicts and destabilization.

The impact of the Arab Spring, the retraction of the U.S. military, and diminishing economic influence on the Arab world—as displayed during the Obama Administration—are facts. The first visit of a Saudi king to Russia shows the growing power of Russia in the Middle East. It also shows that not only Arab countries such as Saudi Arabia and the UAE, but also Egypt and Libya, are more likely to consider Moscow as a strategic ally.

King Salman’s visit to Moscow could herald not only several multi-billion business deals but could be the first real step towards a new regional geopolitical and military alliance between OPEC leader Saudi Arabia and Russia. This cooperation will not only have severe consequences for Western interests but also could partly undermine or reshape the position of OPEC at the same time.

U.S. allies Saudi Arabia, Egypt, Turkey and even the UAE, have shown an increased eagerness to develop military and economic relations with Moscow, even if this means dealing with a global power currently supporting their archenemy Iran. Analysts wonder where the current visit of King Salman will lead to, but all signs are on green for a straightforward Arab-Saudi support for a more prominent Russian role in the region, and more in-depth cooperation in oil and gas markets.

In stark contrast to the problematic relationship of the West with the Arab world, Moscow seems to be playing the regional power game at a higher level. It can become an ally or friend to regional adversaries, such as Iran, Turkey, Egypt and now Saudi Arabia. Arab regimes are also willing to discuss cooperation with Russia, even though the country is supporting adversaries in the Syrian and Yemen conflicts and continues to supply arms to the Shi’a regime in Iran.

What Investors Can Expect from a Moscow-Riyadh Rapprochement

Investors can expect Russia and Saudi Arabia to sign a multitude of business deals, some of which have already been presented. Moscow and Riyadh will also discuss the still fledgling oil and gas markets, as both nations still heavily depend on hydrocarbon revenues. Arab analysts expect both sides to choose a bilateral strategy to keep oil prices from falling lower. Riyadh and Moscow have the same end goal: a stable oil and gas market, in which demand and supply keep each other in check to push price levels up, but without leaving enough breathing space for new market entrants such as U.S. shale.

Putin and Salman will also discuss the security situation in the Middle East, especially the ongoing Syrian civil war, Iran’s emerging power, and the Libya situation. Until now, the two have supported opposite sides, but Riyadh has realized that its ultimate goal, the removal of Syrian president Assad, is out of reach. To prevent a full-scale Shi’a triangle (Iran-Iraq-Syria-Lebanon), other options are now being sought to quell Tehran’s power surge. Moscow is vital in this.

Putin’s unconditional support of the Iranian military onslaught in Iraq and Syria, combined with its support for Hezbollah in Lebanon or Houthis in Yemen, will be discussed and maybe tweaked to give Riyadh room to maneuver into the Russian influence sphere. The verdict on this isn’t yet out, but Riyadh’s move must be seen in the light of ongoing Moscow discussions with Egypt, Libya, Jordan and the UAE.

A growing positive Putin vibe in the Arab world is now evident. The strong leadership of Russia’s new Tsar has become a central point of interest for the (former pro-Western) Arab regimes. The U.S. and its European allies have only shown a diffuse political-military approach to the threats in the MENA region, while even destabilizing historically pro-Western Arab royalties and presidents. Putin’s friendship, however, is being presented as unconditional and long-lasting.

Even though geopolitics and military operations in the Middle East now are making up most headlines, the Saudi-Russian rapprochement will also have economic consequences. Riyadh’s leadership of OPEC is still undisputed, as it has shown over the last several years. Saudi Arabia’s eagerness to counter the free-fall of oil prices has been successful, but a much more significant effort is required to bring prices back to a level of between $60-75 per barrel. Russia’s role—as the largest of non-OPEC producers—has been substantial, bringing in not only several emerging producers, but also by putting pressure on its allies Iran, Venezuela, and Algeria.

The historically important Moscow-Riyadh cooperation in oil and gas is unprecedented.

Without Russia’s support, overall compliance with the OPEC production cut agreement would have been very low, leading to even lower oil prices. The Saudi-Russian rapprochement could, however, be seen as a threat by the West and OPEC itself. Western influence in the region has waned since the end of the 1990s, not only due to the peace dividend of NATO but especially because OECD countries are moving away from oil. Saudi Arabia had to find new markets, which happened with China and India.

The Saudi future is no longer based on Western customers or support but lies in Asia and other emerging regions. The FSU region has also popped up on Saudi screens. Investment opportunities, combined with geopolitical backing and military interests, are readily available in Russia and its satellite states.

For OPEC, the Moscow-Riyadh love affair could also mean a threat. Throughout OPEC’s history, Riyadh has been the central power broker in the oil cartel, pushing forward price and production strategies; most of the time this was done in close cooperation with all the other members, most of them being Arab allies. This changed dramatically after Saudi Arabia and Russia agreed to cooperate in global oil markets. Through the emergence of this OPEC/ non-OPEC cooperation, Moscow and Riyadh have grown closer than expected. The two countries now decide the future of global oil markets before they discuss it with some of the other main players like UAE, Iran, Algeria, and Nigeria. King Salman’s visit is seen as another step toward a more in-depth cooperation in oil and gas related issues.

Besides global oil market cooperation, Saudi Arabia is and will become more interested in investing in natural gas development, not only to have an interest in Russia’s gas future but also to bring in Russian technology, investment, and LNG to the Kingdom.

At the same time, media sources are stating that Saudi Arabia is NOT asking Russia to take part in the long-awaited Aramco IPO in 2018. Russian individual investors and financial institutions, however, are expected to take an interest.

For both sides, Moscow and Riyadh, the current constellation presents a win-win situation. Moscow can reach its ultimate goal in the Middle East: to become the leading power broker and knock the U.S. off the pedestal. For Riyadh, the option to counter the Iranian threat, while also bolstering its economy and hydrocarbon future, is now within reach.

King Salman’s trip could go down in history as the point of no return for the West. Pictures of Russian President Vladimir Putin and King Salman of Saudi Arabia could replace historic images of King Saud and U.S. President Roosevelt (Bitter Lake, 1945). In a few years, King-to-be Crown Prince Mohammad bin Salman might tell his children that this was one of the pillars that changed not only the Middle East but also supported his Vision 2030 plan of becoming a bridge between the old (West) and the new (Russia-Asia).