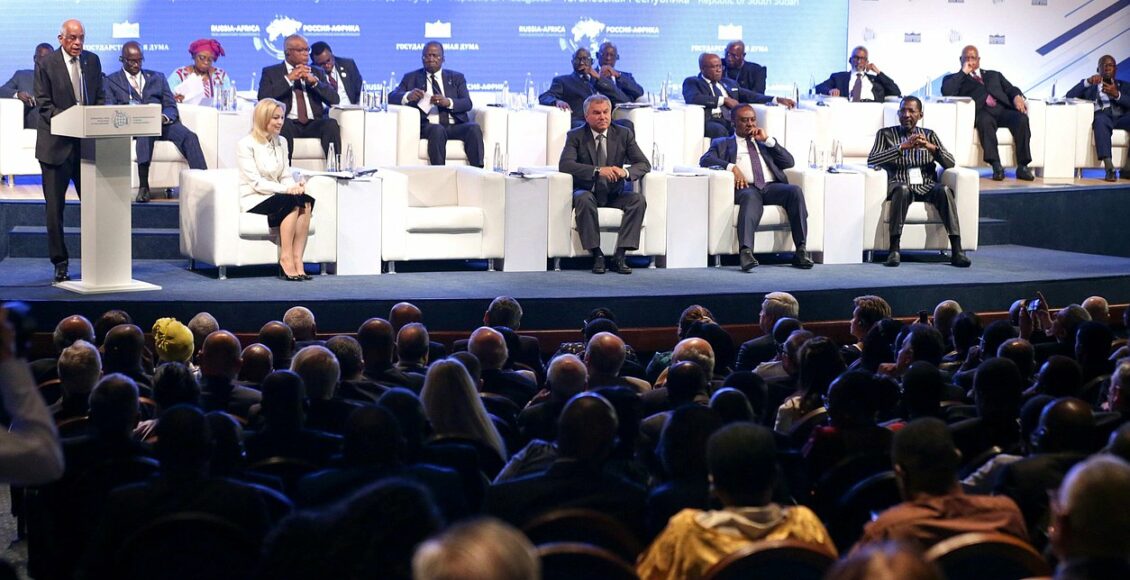 The 2019 The Russia-Africa Parliamentary Conference (Photo: The Federal Assembly of the Russian Federation)
Share

In Africa, Russia seeks more friends, more money, and more influence to offset U.S.-imposed economic isolation, while reasserting Russia’s role as a global power. On May 28th, Moscow announced a Russia-Africa summit to take place in October, with three thousand African business leaders and fifty African heads of state invited to the event. The summit follows a decade-long increase in Russia’s development of viable military and economic partnerships in Africa.

In response, the Trump administration’s 2018 “Africa Strategy” specifically targets Russia as a key geopolitical rival, presenting the United States’ potential African partner countries with an apparent choice between Cold War-style enemies. Again in March, the U.S. pointed to Russia as a threat in Africa, when Deputy Secretary of State John J. Sullivan warned Angola of Russia’s interests in Africa. The U.S. media environment has also fostered an ascendant vision of Russia in Africa, quoting “alarmed” U.S. officials who speak of Russia being “highly active” in the region.

This growing narrative pushes an inflated interpretation of Russia’s real capabilities while ignoring or footnoting the broader context. The relative size, scope, and trajectory of Russia’s gradual increasing economic involvement in Africa indicate an approach fitting with the behavior of other similarly sized economies. Russia’s military footprint and economic connections remain comparably marginal in Africa, while the French, Chinese, and U.S. hold entrenched positions. Meanwhile, Russian military adventurism on the scale of with its involvement in the Syrian Civil War is unlikely in Africa, owing to a Russian population increasingly vocal over domestic issues and opposed to foreign entanglements.

The Kremlin’s military priorities are planted firmly in Russia’s elongated peripheral regions of Europe, the Middle East, Central Asia, and East Asia. Insofar as Russia leaves these spaces, it is usually to counter the United States and allies (who are actively involved in Russia’s neighborhood themselves) with low-level incursions designed for disruption.

In terms of intentions, the Russians, unlike the Americans, do not fight a Global War on Terror across the Sahara/Sahel, requiring a lily pad strategy of U.S. drone bases for thousands of miles. There is not an internal security dimension to Russian involvement in Africa, precluding similarly scaled military deployment.

In terms of capabilities, Russia lacks a significant military or political command in Africa. Many African countries do not have a Russian embassy or even a small diplomatic mission, and Russia’s military footprint—outside of small contingencies of mercenaries—remains marginal, with no bases to bivouac within, and no host governments agreeing to allow them space.  Meanwhile, the United States has 5-6,000 soldiers across Africa and around 34 bases.

While the United States and ally France fulfill air-land-sea campaigns across multi-country theaters, Russia fills niche support roles with countries the United States does not have significant military relationships with—such as Zimbabwe, Tanzania, the Democratic Republic of Congo (DRC), Sudan, and South Sudan.

It is worth noting that the two most high-profile instances of Russian influence in Africa in recent years were borne out of economic enterprises for Russian businessmen. In 2017, mercenaries—not Russian soldiers—from the Wagner Group outfit began advising Central African Republic (CAR) on how to defend against militias in the country’s seven-year-long civil war.  In 2018, it was reported that Russian individuals arrived as consultants in several African countries to influence their elections, such as South Africa and Madagascar. As with the Wagner Group, it was possibly money that drew in the operatives, rather than clear strategic objectives from Moscow.

In addition to a smaller military presence, Russia is also a minor economic player in the region. Russia retreated from Africa after the 1991 collapse of the Soviet Union but reinvested in a sharp increase over the past 20 years. The increases are notable not for their scope but rather their steep return from much lower levels.

Russian trade with Africa makes up less than 1% of global trade with Africa, which is comparable to economies of its own size, though far behind the United States, China, and especially Europe.

Foreign wars are increasingly unpopular in Russia, reducing the risk of major interventions beyond Russia’s periphery

Russia will continue attempts to drum up economic integration with Africa to bring life to its weak economy, but military interventions involving long-term ground deployments to active conflicts, especially at the levels seen by the United States and France, are unlikely—owing to the growing unpopularity of foreign wars among Russians. Refocusing inward, Russia is less likely to afford attention to far-reaching foreign entanglement in the future, moving Africa further to the bottom of the Kremlin’s limited agenda.

Moving forward, and with this context in mind, the Cold War-esque U.S. government and media perspective may incur negative policy implications and misconstruing the United States’ geopolitical rivals’ roles risks miscommunication with current or potential African allies. The United States has the benefit of strong favorability in many Africa states. The U.S. should market itself as a productive partner irrespective of other outsiders, and remind African countries of their agency, rather than force a choice between supposed zero-sum competitors.

Cameron Evers is YPFP's 2019 Africa Fellow and a Senior Intelligence Analyst at WorldAware, Inc., a global risk firm, where he advises a Fortune 500 financial company on geopolitical risk. Previously, Cameron researched for US and Africa-based consultancies and publications with an emphasis on revolutionary movements, civil-military relations, and regime change. He has given talks on African politics within the U.S. government and universities. He holds a Master's degree in International Policy from the University of Georgia School of Public and International Affairs.

Thanks for signing up! Please check your inbox for an email confirming your subscription.
AfricaCentral African RepublicDemocratic Republic of the CongoRussiaSouth SudanSudan
Share
You might also like
Defense & Security