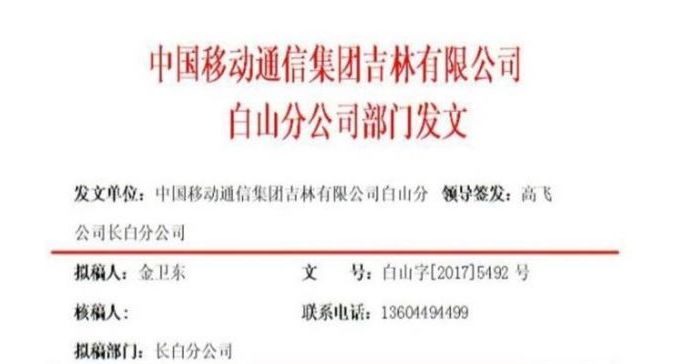 A leaked document published on the Chinese microblogging site Weibo, states that China is constructing numerous refugee camps capable of holding large numbers of asylum seekers fleeing potential disaster on the Korean Peninsula. “As the situation on the North Korean border intensifies, the Changbai County Government is preparing to build five refugee camps,” the document states.

The document has since been removed from Weibo. It remains unverified but is linked to the Changbai branch of the China Mobile Group, the largest state-owned telecommunications company in China. Changbai county sits on the Chinese side of the border with North Korea.

As the situation on the North Korean border intensifies, the Changbai County Government is preparing to build five refugee camps.

The document states that “as required by Changbai County Government, the local China Mobile branch will be responsible for ensuring the full functionality of mobile signals and communication networks in the region.” It adds that Shenhai Fu, the local branch manager is leading the team, and had inspected the alleged construction site earlier this month on December 2 under the instruction of the Changbai County Government.

“Shenhai Fu has led the team to visit the settlement, and performed communications tests,” the document continues, adding that signals were still not up to par and weak in specific areas. The document’s language, as well as the subtitle “North Korean refugee settlement plans” imply the telecommunications services and tests were one part of a significant project.

The validity of the original three-page document hasn’t been independently verified at this time, however, analysts say that the format it was written in, the language used, the level of detail, the mention of Shenhai Fu by name (whose social media accounts are linked to China Mobile), as well as the fact the original document had since been completely culled, have led many experts to conclude the report is genuine.

“It’s a perfectly sensible decision and to be expected that China will be putting contingency plans in place for a potential influx of large numbers of refugees from the Korean Peninsula given the current situation,” China-Korea expert Dr. Leonid Petrov told the Australian Broadcasting Corporation.

“I know that Russia — who also shares a small border with North Korea — has been building refugee camps some 15 years ago as part of its contingency plans, in case of an exodus triggered by famine or war or the like.” Petrov continued by saying “it’s only a sensible decision, and from the Chinese perspective, it would be wise to plan [in advance] and prepare the capacity to accept and absorb large groups of people, given that the neighboring provinces are heavily populated by ethnic Koreans.”

He added that “pre-empting that situation is, of course, the ideal, which is why Beijing officially maintains its position of denuclearization on the peninsula.” Dr. Petrov also said the logistics mentioned in the document and language used make “perfect sense” given the geography the region along North Korea’s border with China.