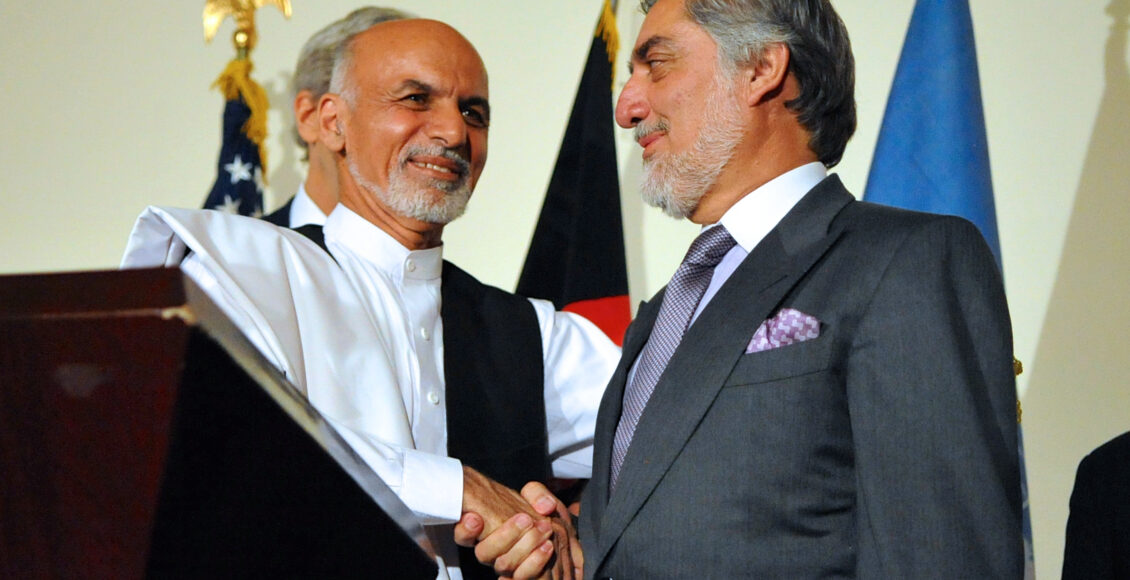 Seventeen candidates are running for the 2019 Afghan presidential election on September 28, 2019.

The two leading candidates are the incumbent President Mohammad Ashraf Ghani and Chief Executive Abdullah Abdullah, who serves as de-facto prime minister of the country.

President Ghani has studied and lived abroad. Before returning to Afghanistan, he worked as an anthropologist at the World Bank. In 2001, Ghani served as Special Adviser to Ambassador Lakhdar Brahimi, the UN Secretary General’s special envoy to Afghanistan.  He then went on to advise interim-President Hamid Karzai and served as Finance Minister in the Transitional Islamic State of Afghanistan until December of 2004.

After a stint as Chancellor of Kabul University, Ghani announced his nomination for the 2009 presidential election. Keen to bolster his credentials as the favorite candidate of the international community, Ghani hired Clinton-campaign chief strategist James Carville as his campaign advisor. In the end, however, he secured a minuscule 2.94% of the vote, against Abdullah securing about 40% and incumbent Karzai controversially securing around 49% of the votes.

Ghani ran for president again in 2014, trailing second behind the leading candidate Abdullah Abdullah. However, since neither candidate could secure 50-plus one percent of the vote, a majority, the election went into a runoff which became controversial due to widespread allegations of ‘industrial scale’ fraud. The United States Government intervened and brokered a power-sharing agreement between the two leading candidates, where Abdullah compromised to settle for the position of Chief Executive, and Ghani became President.

Abdullah’s career has been both colorful and reflective of Afghanistan’s tumultuous recent past. Trained as an ophthalmologist but perturbed by the repressive political environment in the wake of the Soviet invasion of the country in 1979, Abdullah opted to join the anti-Soviet resistance in the early 1980s. From the early days of the resistance up to the U.S.-led War on Terror and the campaign for the liberation of Afghanistan from the Taliban and Al-Qaeda, Abdullah’s relentless efforts for promotion of a peaceful and democratic Afghanistan have earned him both national and international recognition.

Following the ouster of the Taliban regime in late 2001, Abdullah played a crucial role in establishing the new Interim Administration where he served as Minister of Foreign Affairs from 2001 to 2006. He reinvigorated Afghanistan’s international relations, engaging in active foreign diplomacy to reestablish not only old ties but also to open new embassies as the country reeled from years of international isolation under Taliban’s rule and factional conflicts.

In 2009, Abdullah ran a highly impressive and dynamic campaign under the slogan of “Hope and Change” and a national agenda to institute needed reform and change Afghanistan’s system of governance from an over-centralized one to power devolved into local governance. Abdullah was the runner up against the incumbent Karzai who drew on all the resources and benefits of his incumbency could accrue to him.

A runoff election between the Karzai and Abdullah was called after the Afghan Electoral Complaints Commission decided through a rigorous verification process to invalidate a large number of questionable ballots, with the majority of those votes being in favor of Karzai. Having seen his efforts for reforms of the electoral bodies frustrated by the incumbent, Abdullah declined to participate in the runoff.

Iran, Algeria, Sudan, and Venezuela Have One Major…

After the United States brokered the National Unity Government accord, Abdullah brought a much-needed sense of sobriety and moderation to a beleaguered government as the Chief Executive, with a president known for his irritability. Abdullah’s credibility is further strengthened by his secure political connections with grassroots level politics, having worked in different roles during the resistance against the Soviet Union’s invasion of Afghanistan in the 1980s and the resistance against the Taliban and Al-Qaeda in the 1990s.

Ghani and Abdullah are widely considered the top two candidates in the presidential election scheduled for 28 September. However, Ghani’s ranks are increasingly depleted with the departure of influential erstwhile allies like General Abdul Rashid Dostum, Mohammad Karim Khalili, Anwarul Haq Ahadi, Hanif Atmar, Sayed Mansoor Naderi, and many others who felt alienated with the president’s highhanded governance.

Abdullah Abdullah has built a strong and multiethnic team under the banner of “Stability and Partnership” with leading politicians from across Afghanistan, including those who defected from Ghani’s camp as well as others. Abdullah is known as a trustworthy candidate with robust political networks and substantial public support.

The 2019 Afghan presidential election remains a serious matter for not only Afghanistan, but the international community, as well—especially at a time when the United States is in negotiations with the Taliban. It is essential to avoid political deadlock and crisis of the sort that afflicted the 2014 presidential election, requiring a tremendous effort to prevent any possible vote-rigging.

The country’s combustive internal identity politics could become worse if not controlled through a rational approach. One of the significant upcoming challenges for Afghanistan and its allies, particularly the United States, will be the question of how to handle the likely political deadlock as well as manage the peace process.

This could be done through backing a unifying national leader who has genuine popular support many regions of the country and can bring political leaders and ethnic groups together under one umbrella through a consensus. In such critical times, Afghanistan needs strong and reliable leadership that can position itself as a central player in the Afghan peace process by striking a delicate balance between engaging with the Taliban and maintaining strong relations with the international community.