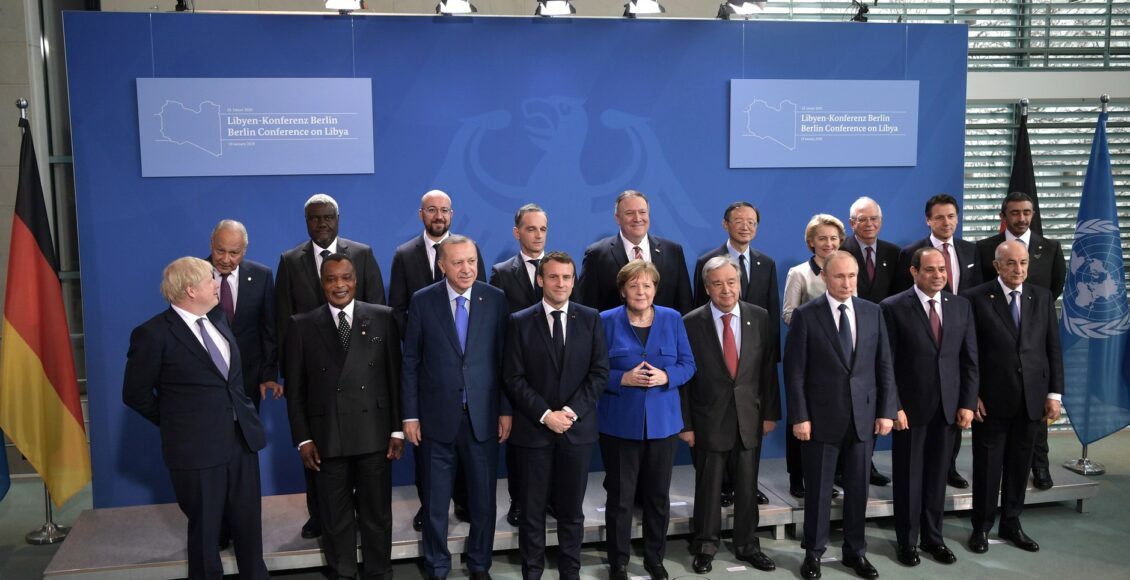 Participants in the International Conference on Libya in Berlin, Germany
Share

Since the overthrow and killing of Muammar el-Qaddafi in 2011, Libya has been roiled by chaos and civil war. Nine years later, constant interference from external actors is adding oil to the fire, fueling a humanitarian crisis. The disparate priorities of rival international players in Libya have proven a major challenge to the European Union (EU) in coordinating a meaningful resolution to the conflict. Yet the EU’s recent show of leadership in managing a global response to COVID-19 suggests that it may finally be up to the task. As the civil war in Libya continues to intensify amid an active pandemic, the EU should capitalize on its recent exercise of international leadership to meaningfully address the crisis.

Over the past year, conflict in Libya has escalated dramatically. In April 2019, the rebel forces of General Khalifa Haftar – supported by Egypt, the United Arab Emirates, and Saudi Arabia – led an offensive to seize the Libyan capital of Tripoli, home to the UN-recognized government of Prime Minister Fayez al-Sarraj – backed by Turkey and Qatar. Since then, the conflict has continuously intensified, killing hundreds and displacing 150,000. In recent weeks, violence has increased around Tripoli, with heightened shelling and attacks by Turkish armed drones.

As COVID-19 now spreads across the country, Libya’s already precarious health system risks collapse. As of March, clashes between the warring factions had damaged 27 health facilities. According to a former senior coordinator for US Assistance to Libya, COVID-19 patients are “competing for medical attention with the war wounded.” This has left Libyan authorities pleading for a ceasefire to redirect efforts toward the pandemic. Yet attacks on health facilities have multiplied, and a lack of medical equipment and professionals, as well as cuts to electricity and water supplies, compound the situation further.

For migrants, the situation is especially dire. Even before COVID-19 reached the region, disrupting refugee resettlement and grounding flights, Libya’s almost 700,000 migrants and refugees, and over 200,000 internally displaced people faced conditions of high precarity. “[A]rbitrary arrest by non-State actors, detention for indefinite periods of time, bonded labor, harassment and general exploitation,” according to the International Organization for Migration, already led many to flee across the Mediterranean to Europe. Nonetheless, EU and Italian efforts to decrease migration from Libya over the past three years have succeeded, despite strong condemnation from human rights groups. The ever-deteriorating humanitarian situation is leading the United Nations High Commissioner for Refugees to warn that more refugees now will attempt risky sea crossings.

For Europe, this presents an all-too-familiar challenge. Long before the most recent escalations, stabilizing the conflict in Libya had emerged as a key security matter for Europeans due to concerns about extremism and the country’s position as a departure point for refugees. Yet disagreement within the EU has hindered the bloc from taking meaningful action.

Meanwhile, Russia and Turkey have stepped up to fill the void left by a lack of European – and American – leadership. In late 2019, Russia, who supports Haftar, sent mercenaries to Libya in an attempt to further assert influence in the Middle East. Turkey responded by deploying troops in support of al-Sarraj’s government. A day after European officials issued a joint statement condemning this foreign interference for “fueling the crisis” and urging an “immediate cessation of hostilities,” Presidents Putin and Erdoğan jointly called for a ceasefire in the region.

Europe’s weak sway over the situation was further confirmed after a German-led international conference convened on January 19 to “[unify…] the International Community in their support for a peaceful solution to the Libyan crisis.” The “Berlin Process” brought together not only high-level European officials, but also the leaders of Russia, Turkey, and Egypt, among others. The joint communiqué released after the conference called on all parties to respect the 2011 UN arms embargo and end foreign interference in the conflict – a demand Libyans themselves have been making since long before Turkey’s most recent action.

Yet on January 25, the UN Support Mission in Libya reported that the previous ten days had seen numerous cargo and other flights landing at Libyan airports “providing the parties with advanced weapons, armored vehicles, advisers and fighters.” Clearly, any European diplomatic success achieved in Berlin had been short-lived.

Such immediate and blatant flouting of the conclusions of the Berlin Process confirms that external actors’ ambitions in Libya continue to prevent meaningful international action to resolve the conflict. Beyond the recent escalations in Turkish and Russian interference, nationalist and anti-immigrant European leaders have hindered agreement on EU migration policy, and thereby, a collective response to the Libyan conflict. In March 2019, Matteo Salvini, leader of the right-wing nationalist Italian party “The League,” blocked an EU mission rescuing and transporting migrants from the Libyan coast to Europe. Likewise, Austrian Chancellor Sebastian Kurz, with Hungarian support, later objected to restarting this same mission.

Yet in the face of the COVID-19 crisis and with the glaring void in global leadership left by the United States, the EU is stepping up to the geopolitical plate. In an attempt to finally fulfill French President Macron and European Commission President von der Leyen’s ambitions for the bloc, Europeans are working to coordinate a much-needed international response to the health crisis. France is spearheading G7 meetings and calling for debt suspension to allow African countries to manage the pandemic; and an EU-organized international fundraising conference raised $8 billion for laboratories working on a COVID-19 vaccine.

Such solidarity demonstrates that the EU is capable of meaningful coordination in times of crisis. As COVID-19 spreads throughout war-ridden Libya, dramatically exacerbating an already devastating situation for civilians and migrants alike, the EU must harness its recent show of global leadership to rise above the warring factions and spearhead a resolution to the conflict. A failure to do so would not only fuel criticism that the EU is unable, or unwilling, to forcefully exert leadership in hotbeds of conflict, but also perpetuate the ongoing humanitarian tragedy.

Agneska Bloch is the 2020 Geostrategy and Diplomacy Young Professionals in Foreign Policy Fellow and an Analyst in European Affairs at a Washington think tank. Previously, she interned in the Franco-German Relations program at the German Council on Foreign Relations in Berlin. She received her B.A. from Northwestern University in 2019, where she studied philosophy and political science.
Thanks for signing up! Please check your inbox for an email confirming your subscription.
European UnionLibyaRussiaTurkey
Share
You might also like
Defense & Security