Liberal Internationalism, an Ideology of Violence 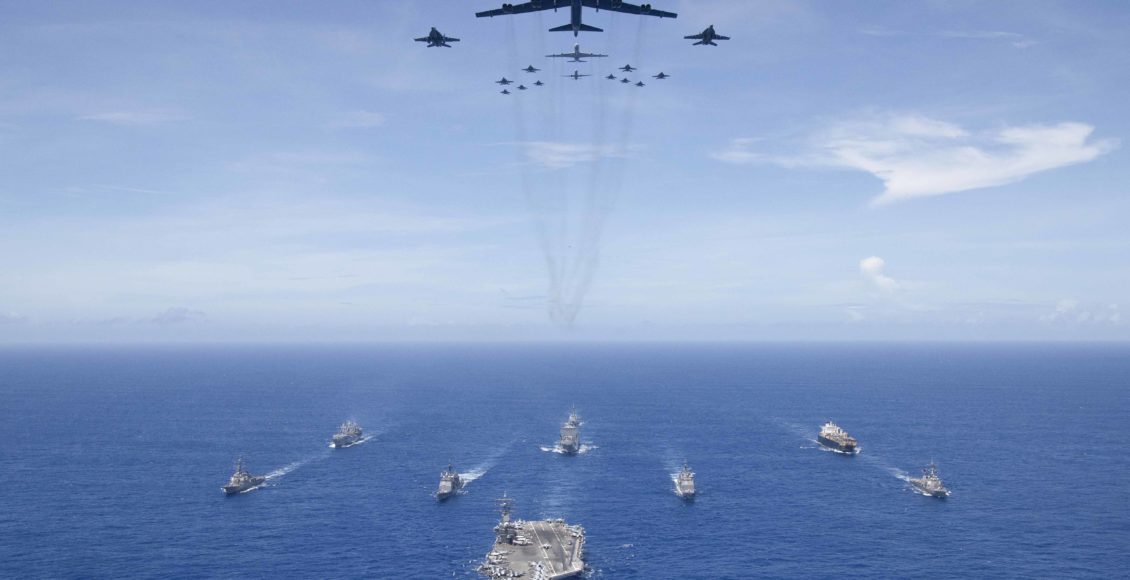 During the presidency of George W. Bush, the administration’s cabinet and top advisors were an eclectic mix of liberal internationalists and neoconservatives. The thing these two ideologies have in common is their lust for foreign interference. At the surface their objectives were different, but at their core, they believed the United States should have a grand strategy of dominant manipulation on the world stage. In invading Afghanistan and then Iraq, liberal hegemonic rhetoric was shouted as not only justification for war but as a divine duty of the United States as the world’s sole hegemon. It was common to hear Bush and his team promote ideas such as the democratic peace theory, and the duty to liberate the veiled Afghani women under Taliban control. Although one can easily get behind democratic peace or the liberation of women, these were little more than post hoc justifications for invading sovereign nation-states. This is the unfortunate reality; liberalism is an expansionist ideology that inevitably does more harm than good.

The Core Assumptions of Liberalism

At its base level, liberalism emphasizes inalienable rights and individuality. From this baseline, thinkers have developed theories and ideas about how these rights should be manifested. The conclusion is at the crux of whether liberalism acts as an expansionist ideology or not. Although one could trace liberalism quite far back in historical political thought, John Locke acts as a cornerstone of the philosophy. Importantly, Locke lays the groundwork in Two Treaties of Government that all men are in “a state of perfect freedom,” that is to say, that humans have natural or inalienable rights.1

Although different thinkers have come to different conclusions of the type of liberalism that is dominant. In the American case, which will be the primary subject for the remainder of this piece, progressive liberalism and its emphasis on positive rights is the only dominant strand. According to John Mearsheimer in The Great Delusion: Liberal Dreams and International Realities, this is true for three reasons: The Industrial Revolution, nationalism, and modern peacetime militaries.2 Since the United States is the sole world superpower and also subscribes to modern liberalism, the next section will explore how those two characteristics make liberalism incredibly expansionist in its aims.

To first explain why liberalism is inherently expansionist, one must understand how important the concept of inalienable rights is too liberal thinkers. It is through this understanding that the other layers form. If one believes, as liberals do, in inalienable rights, it means that everyone in the world has the same inherent set of rights. This is so important to internalize as a concept because of what this belief drives a country to do. For instance, if the fundamental principle is that each human has the same rights, then there is inevitably a duty to ensure that these rights are protected.  It is from this duty that humans feel a calling, and eventually, a nation-state can be provoked to meddle.

The American view of liberalism and its focus on positive rights results in social engineering. Social engineering manifests itself through policies aimed at leveling the playing field. On the domestic side, an example of this would be affirmative action. This policy manipulates the playing field in order to give a group who is historically disadvantaged a fairer opportunity. This is done at the expense of negative rights. Since people within a nation have more in common with each other than they do with people of other nations, it is possible to agree on foundational rights within the confines of one’s borders. For example, in the United States, the Bill of Rights is mostly noncontroversial. However, since each nation-state has its own identity, agreeing on foundational rights between states, or worse, globally is all but impossible. However, many liberals feel confident that they can project positive rights aboard. It is from this confidence that nation-states begin to feel obligated to intervene in places that rights are threatened.

Even though a desire to meddle and optimism of success is in the DNA of liberal internationalists, they frequently lack the number one characteristic needed for liberal hegemonic pursuit, unipolarity. For most of the modern world, the globe existed with multiple superpowers. In a world with more than one superpower, countries’ foreign policies were preoccupied with survival. Since there is not a global state, the nation-state is the highest level of authority. In a multipolar world, nation-states are required to operate using a realist strategy. This strategy forces countries to balance, position, and align themselves in a rational way. However, in 1991, and the collapse of the Soviet Union, the United States found itself without a rival. This unipolar world gave the liberal United States the rare opportunity to pursue any foreign policy strategy they wanted without fear of attack or significant pushback.

Thus far, it has been established that liberal internationalists believe in global inalienable rights and that these rights are positive in nature thus requiring social engineering. Further, they have profound confidence in their own ability to execute global social engineering. Now, as the lone global power, the United States is unencumbered in its choice of foreign policy strategy. With all of this in place, according to liberal logic, one has the duty to protect and enforce the rights of others. From this duty, the next question is how is this accomplished? Despite the liberal internationalist fascination with international organizations, it is interesting that the policies of those institutions mirror that of the dominant state. With the United States being that state, the United Nations and NATO have taken their lead in liberal projection and have acted as a puppet organization.

It’s illogical for liberalism as a foreign policy to be non-expansionist and has proven itself to be very expansionist. If inalienable rights are real, then how can a liberal internationalist not protect those rights abroad, even if it is through violence. It is from this paradox that one should understand that despite the peaceful façade, liberalism as a foreign policy is not only inherently expansionist but innately violent.

Arguments Against Liberalism Being Expansionist

Logic supports the understanding that liberalism as foreign policy is expansionist and violent, but some clearly don’t believe this. The proponents of liberal internationalism do so for three main reasons: democratic peace theory, economic interdependence theory, and liberal institutionalism. If these theories are true, then liberal internationalism is not only the peaceful approach to foreign policy but ultimately non-expansionist, at least in the militaristic sense.4

Democratic peace theory is the idea that democracies do not go to war with each other. Therefore, it stands to reason the more democracies in the world would lead to less conflict. While not 100-percent true, this theory is mostly true. It is also assumed through this theory that as liberal democracies spread, it will be contagious, and more countries will join up. Further, despite liberal democracies not often fighting each other, they frequently wage wars against both non-democracies and illiberal democracies. Even if the theory was factually and theoretically true, the act of spreading democracy in the first place requires intervention. Autocrats typically don’t yield their authority from stern warnings or even sanctions. In addition to the expansionist beginnings of the democratic peace theory, there is reason to believe that even with military defeat, nation-states are not hardwired to desire liberal democracy. For reasons beyond the scope of this piece nationalism and rational choice trump democracy in most cases.

Economic interdependence theory’s core assumption is that when two countries are economically tied, they do not fight. This theory is being played out in the modern world through the correlation of globalization and the decline of interstate wars. This theory is based on logic and observations but again misses one of the core tenants of the global landscape and that is security always trumps economics. From this, it stands to reason that security concerns, for instance, a rising China, combined with nationalism and political autonomy make economic interdependence theory a level of protection against interventions but not a shield from it. Further, in the liberal’s playbook, rights are at the center. These inalienable rights would always be protected above economic cohesion.

The final idea promoted by liberals to support their peaceful internationalist pedigree is the idea of liberal institutionalism. This argument rests on the idea that states that join international institutions more often cooperate with one another. Again, on the surface this makes sense, and likely often does work. For instance, nation-states who have a platform to discuss issues would likely be less inclined to choose violence. Unfortunately, despite liberalism’s reliance on tolerance, they remain intolerant of non-liberals. For example, Rawls in Law of Peoples makes the claim that countries that are not tolerant of liberal nations are subject to violent intervention.5 This furthers the above theme that even though liberal nations in organizations may fight less, it is still on the liberal state to intervene and violently force the illiberal state to conform.

Even if all the liberal theories are correct, and a world full of liberal democracies would be the one Francis Fukuyama in The End of History suggests, expansionist efforts would be needed to achieve those goals.6 So long as inalienable rights are at the core of the liberal project, and the world is made up of nation-states, it is inevitable that liberal internationalism will be interventionist and expansionist in nature.  Further, so long as nationalism and realism are present in the world, host countries will fight to avoid this aggressive pursuit of international social engineering.

1 Locke, John. Two Treaties of Government : In the Former, the False Principles and Foundation of Sir Robert Filmer and His Followers Are Detected and Overthrown, the Latter Is an Essay concerning the True Original, Extent, and End of Civil Government. Making of the Modern Economy Digital Collection. London: Printed for Awnsham and John Churchill …, 1698.

4 These reasons and arguments are based heavily on those found in Great Delusion: Liberal Dreams and International Realities

Major Jesse Humpal is an Active Duty Air Force Officer and Ph.D. Candidate at Northwestern University studying insurgent behavior, civil wars, and global norms.  Prior to his current work, Major Humpal served as a SOF Air Force Pilot where he deployed in support of several global operations including OEF.  In addition to his undergraduate degree from the University of Nebraska-Lincoln, he holds a Master's degree in Public Policy and a Master's degree in political science from Northwestern University.